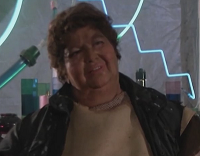 So far we might be giving you the wrong impression that Metalstorm isn't particularly original, but that would be selling it short. No, there are plenty of things in this movie that are probably too original. Like, oh, how about the guy who we've taken to calling Darth Pachinko, a life-sized Toxic Avengers action figure who squirts a potent mixture of Ecto Cooler and LSD out of his one robot arm? (He is of course ably played by shiny thespian powerhouse Destro, who until watching this we hadn't realized was actually a real-life person and really the perfect casting choice for a psychic pinball-headed half-lizard henchman.) Well, it turns out you can't just combine mind-bending insanity like that with a bland slurry of the most generic parts of other science-fiction movies and hope that it'll all average out. Just a quick tip for all you aspiring filmmakers out there.

If there's one thing we can applaud as a positive decision in this movie, it's the casting. Richard Moll is a no-brainer as Chief Cyclops Anthony Cave Kiedis, since casting him in anything is automatically the greatest idea ever, especially in contrast with casting Jeffy Byron in anything, which is a lot like casting Keanu Reeves as Van Helsing (or really any role that comes with a title like "professor" or "doctor"). Again, before you jump on us for dragging Richard Moll into this, Richard Moll is the best and we are his #1 biggest fans so let's just be clear about that right now. On the other end of the spectrum is obligatory love interest Kelly Preston (a.k.a. Princess Heya); when you can look at your own IMDB page and #2 under "Known For" is fucking Twins, that's when you know you really made it.

Anyway, the titular villain is the inimitable Jared-Syn, of the Neo Valencia -Syns, a man whose fashion sense makes David Bowie look like an especially frumpy ascetic monk. When he's not strutting around in his mom's leather armor and trying to look menacing, Jared-Syn likes to spend his time collecting the amazing power crystals, which are capable of such feats as...well...uh, they shoot lasers occasionally, but mostly they have an incredible ability to shatter into a million pieces when you gently drop them on a nice, soft pile of sand. Also, if you blast them with lasers they do an uncanny impersonation of Cher's ghost getting its dick caught in a zipper:

Now, we know you're probably thinking that we're skipping over big parts of this movie, because we haven't described any kind of a storm or potentially storm-like weather system, let alone one involving any kind of metal. But like so many of the movies we watch here, the title of Metalstorm: The Destruction of Jared-Syn is an utter bald-faced lie. The closest thing to a "metalstorm" is a jumped-up go-kart with half of a junkyard spot welded onto it doing donuts in an abandoned salt quarry for hours on end, which we'll give maybe partial credit for. But surely that guy Jared-Syn gets destroyed, or at least mugged and sort of roughed up, right? Right? How about this instead: after a dramatic showdown, Jared-Syn and what's-his-face jump on their hover-trikes and into a high-space chase, which ends in a crude early-concept storyboard sketch of 2001: A Space Odyssey or possibly a kaleidoscope colonoscopy:

At first we thought they had crashed horribly, and were both tripping balls on the body's frantic autonomic release of endorphins immediately preceding total brain death. But nope, our brave space-ranger comes back safely to reveal that Jared-Syn has escaped into an "energy tunnel", and he could be anywhere. Then he says "I'm going after him," but then instead of going after him, he blows up another random crystal for no reason, and then walks off into the sunset love interest in hand.

And that's Metal Cars: The Chasing and Ultimate Failure to Stop Jared-Syn. Honestly, we can't help but be impressed by a movie so catastrophically bad that whoever came up with the title hasn't actually seen it. So here's to you, Charlie, may your hot new 7th sequel to a wacky ironic romp about an armchair being possessed by the reincarnated soul of a serial killer who was already reincarnated as the ghost of an evil bong made out of a toilet and terrorizing clueless co-ed stoners be as successful as the rest have never been.