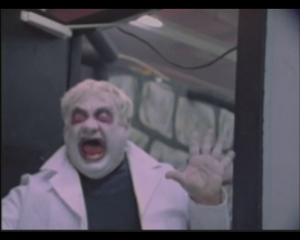 SECULARISTS!! SECULARISTS!! SECULARISTS!! SECULARISTS!!Obviously there's danger of being overwhelmed by action here, so Heavener tosses in some yanking on the ol' heartstrings in the character of Amy. She's a God-fearing wee lass with a plastic Dollie surgically grafted to one hand and Jesus H. Christ on speed dial in the other. Not only that, but her parents are so goddamn dead she can't even talk anymore! She runs away from home because she hates her not-real mom and dad, then sets up camp in a cardboard box in a garbage dump. Of course when she meets the suave and benevolentDavid HeavenerJohn 141 she befriends him immediately, deciding that a guy who reads minds and chills out with dumpsters is obviously an angel. But John's evil Producer King calls him to a surreal-ass talkshow, leaving Amy vulnerable to attack! Fortunately John's telepathic disco ball grows tits and saves the day, but then John himself shows up on the scene again -just in time to get injured by one of these deadly hi-tech lasers and hover on THE BRINK OF DEATH.

Everyone gathers around John's bedside being very concerned because he's almost certainly going to cark it. Discoball Girl explains to moonchick that she and John are actually radio frequencies, but FM frequencies because AM frequencies are evil and the universe is love and blah blah blah. I stopped paying attention to the dialogue right about here as I realized David Heavener managed to turn every tinfoil-hat-lizard-man-giving-birth-to-Obama-in-Muslamistan post on the internet into a movie script. Anyway, Amy pleads to Jesus and rescues John from this Kubrickean dream sequence. I mean Kubrickean in the sense that you don't have to have any idea what's going on to want to schedule an appointment with your nearest mental health professional:

This is where the religiosity gets cranked up to a billion. John downloads the mystical interstellar document known as the Bible from his databanks and starts doing 9 + 11 - Jews = WTC numerology shit with his name. 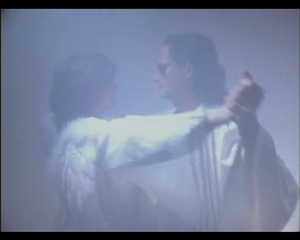 Amy, after rolling around in a bed of roses/kittens for a little bit, is kidnapped by the Producer Satan King but makes him bleed from his head with a Crayola cross. I suddenly realized that all of the vaguely Nickelback sounding music thus far was Christrock, except instead of having to do with healing the sick and loving mine neighbor it was screaming at me to go smack non-believers with a nail-ridden two-by-four. John stops engaging in hand-to-hand combat and switches to saving the day by telling people that he is the Messiah and that they should believe in their new Alien Jesus.

So they rescue Amy, but Titslady and John die in the process. Luckily they make sure to wriggle their way out of the light for a little bit to remind Amy that she was right about God and "the Messiah is Lord." Just in case you're still loitering around at Grand Clue Station, David Heavener is completely batshit crazy; I think those pants cut off circulation to his brain but God bless 'im. I don't knock someone for their love of Jesus, but all of Heavener's characters are Christ-obsessed zombies shuffling around in a Caucasian-only dreamworld. Anyway this review is over so let's end on an adorable note! Wave goodbye, Amy! 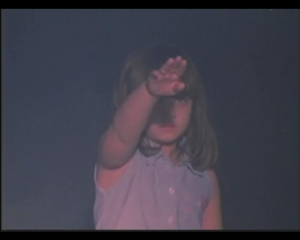 Well, that's about all I can take of this shit folks! It's been a swell year and a half, but sixteen credit hours and one thousand pages of assigned reading per week (+ dealing with the academic socialist agenda) don't do as much for churning out comedy gold as I'd like. Thus, I've decided it's time for Raptor Red to mosey on off to more prey-saturated Cretaceous pastures. Thanks for the memories and creepy emails, folks, and God bless your self-loathing little hides.