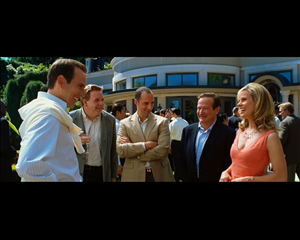 Actually it might be worth the price of admission just to watch all the nerds in the audience achieve simultaneous climax.But to show this is a Very Serious Movie, we need to fake some sort of "depth" to the "plot." RV's Big Dramatic Plot Catalyst is identical to the Big Dramatic Plot Catalyst of Every Live Action PG Movie Ever, namely that Daddy's boss is a big fat meanie who might fire him just for the dastardly pleasure of it! So Robin's super happy RV family time is in part a cover-up, because he has to be in Colorado for some work-related reason involving soda pop and in all likelihood feces. The fact that he's working must be kept top secret from his family members, because if they ever found out that Daddy was working himself to tears to pay for their fucking mansion of a house that everyone in these weird white people family movies seems to have, they would never forgive him.

This is because Robin's loving family is a big fat gaggle of cunts. Every time Pa Robin tries to give them a hug, they writhe and retch and gnash their teeth as if he had some sort of flesh-eating virus. The 10% of RV's dialogue that is not devoted to Robin Williams being zany consists of his beloved family informing him that, yes, they can see he is working his ass off in order to provide them a pleasing familial bonding experience, but that he is the worst husband/father in the history of humanity and they hope he dies so they can sell his 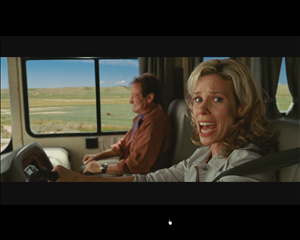 Which they would have some compelling evidence for, by the way. Every movie has scenes where the dialogue sounds a little inappropriate and the 15-year-old boys in the audience start nudging each other, but RV has enough of them where it starts to get creepy. These include a painfully long bit where a little girl tells Robin all about why she wants to marry him, Robin letting Jeff Daniels spray his dick with a high-pressure hose while he makes noises like a dog in heat, and a cheerful little boy appearing and complimenting Robin on his "nice one" while he's on the toilet. If RV was going for the awkward comedy that's in vogue now, congratulations! The idea of Robin Williams molesting innocent children does indeed make me uncomfortable! So maybe Robin's family just hates him because he's a

Why did you spend an entire movie trying to be Clark Griswald? Not even Chevy Chase wants to be reminded of Chevy Chase anymore.pedophile, although they do love him enough to gather ten feet away and chat with him merrily while he's having explosive diarrhera behind a tree.

For all of its flaws, RV accurately recreates the feeling of having to endure a grueling journey trapped with a bunch of dirtbags you can't stand, especially if that journey involved popular comedy actor Robin Williams in any shape, way or monetarily profitable form. For all my ribbing, I actually do feel bad for Robin. Even with an awful script he holds his rubbery head up high, unflinching as his hard-earned career falls in tatters all around him. Someone should send that poor man a care package. Of coke.

See how I wrote an entire article about Robin Williams without referencing his unusual amount of body hair? DO YOU SEE HOW I DID THAT???