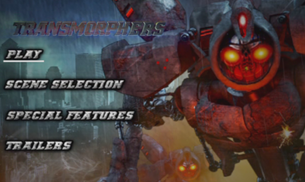 The Case For: It's better than Transformers 2.

The Case Against: Transformers 2 was two and a half hours of Shia LaBeouf looking constipated.

Vweeezvwoop!Transmorphers is a magical family adventure from The Asylum, a company that makes the most out of their paper-mache filmmaking techniques by ripping off equally shitty blockbusters with better production values. Yes, there are technically giant robots in Transmorphers and yes, they are comically bad. However, what's more hilarious is the extraordinary efforts they go to in order to avoid showing the robots. The movie is 85 minutes long with maybe 15 minutes of robot footage total, mostly at the end.

There's a single brief "action" sequence at the beginning of the movie to tide you over for the long haul, and it gives a good idea of what Transmorphers has in store. It starts off with a bunch of awkward people standing around and mumbling about how they have a plan, which they describe in tantalizing detail; it involves a super genius doctor with plastic hoop earrings, some magical space hubcaps, and extremely specialized tasks performed by characters we will never see again.

You'd think we'd also get to see the Plan in action, seeing as we just we just wasted almost ten minutes

I... always score in the bottom three when I play Laser Tag. THERE. I SAID IT.combing nits out of its ballhairs. But no! The actual operation is three minutes of the Cretin Squad standing around in the rain wearing Laser Tag gear, complaining loudly about how they don't know what's going on but goddamn it let's keep chilling out here and maybe something will happen. Finally we hear a "spooky robot noise" that sounds exactly like Wall-E in a blender, which immediately cause every NERF champion on-screen to start screaming RETREAT, RETREAT!! Strobe lights flash and dramatic mall goth music bellows at us, even though the Squad hasn't moved from its huddle about five yards from their base in the last 15 minutes of film. After a total of 15 minutes of absolutely nothing happening, we catch a glimpse of some blurry metal stomping on soldiers. And that's it. That's the Plan. Cool.

It's also all the robots you get for the next hour! There's a good reason for this of course: the special effects make the Play-Dough dinosaurs in Raptor Island look like-- Well, maybe not like Pixar, but at least as good as the 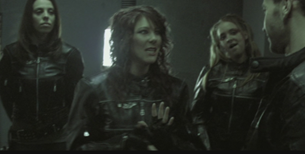 Hell yeah you like scenes of people standing around talking about shit in darkened rooms don't you????shit Dreamworks keeps squirting out. The robots come in two, maybe three designs total, none of which sports anything remotely resembling a texture or proper lighting. The only transmorphing they do is from a big dumb thing that sort've looks like a person to another big dumb thing that definitely looks like some poor bastard got paid $2 an hour to render. But gosh durn it, Leigh Scott isn't going to be prevented from ripping off a movie based on giant robots just because he has absolutely no means of depicting them! He is going going to cram in a metric fuckton of filler!