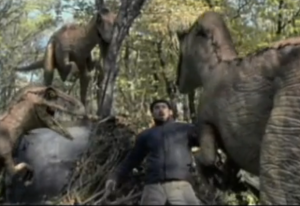 Overview: Badass Navy SEALS end up on a deserted South China Sea island that looks suspiciously like Traverse City, Michigan. There, they must do battle with terrorists, dinosaurs, and terrorist dinosaurs while exploring their innermost feelings in unwavering monotone.

The Case For: This time, I get to review an action-packed bad movie so I can describe it in an entertaining fashion instead of whining about how it put me to sleep!

The Case Against: Most of the action consists of things falling over, then describing how those things fell over in 10-minute dialogue sequences. 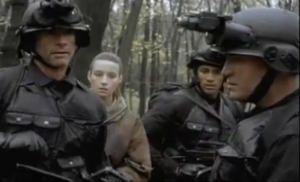 Celebrate diversity! Or don't.Like any good suburban white kid with the maturity of a six-year-old, I fucking love dinosaurs. They're lean, they're mean, and they have a consistently high output rate of blood 'n' guts. Alas, the titular raptors in Raptor Island aren't the most menacing bad guys this side of Blue's Clues. They're essentially ripoffs of Jurassic Park's dinos, just with Spielberg trashed off his ass and using Turok 2's game engine. So I am left to enjoy the movie's gripping plot, which kicks off with a couple of exploding boats and goes downhill from there.

For the first part of the movie, our island luau is divided into two groups: the achingly manly Navy SEALS and somemoderately naughtypure evil terrorists. The terrorists are easy enough to discern from the heroes; they speak in exaggerated Russian/Middle Eastern accents that no one on God's Green Earth actually has, but identifies their country of origin as TERRORISM. It's hard to tell the dozen or so cast members apart beyond that though, as 98% of them are pasty dudes wearing enough "badass" black clothing to get them punched at a pep rally.

Not that the cast's size lasts for long, of course, as its primary purpose is to serve as raptor kibble. Sporadic raptor attacks pepper the script, but none of them lasts long because the raptors are aware that they look like poorly-lit Play-Dough and usually quickly scurry back into the forest out of humiliation. We're mostly left with scenes in 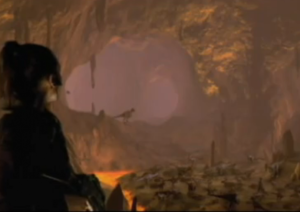 I hate it when little brown blurs try to kill me.which the good guys and bad guys kill time by shooting bullets into trees for awhile, followed by horrible bouts of exposition and/or romance.

Long exposition sequences in a Sci Fi Channel Original Movie would be bad enough on their own, but the majority of them are delivered by The Boringest Soldier, who did not get to be the main character because he is exciting, talented, or an unacceptable treatment for insomnia. Boringest got to be the main character solely because his manly chin cleft is deep enough to discover a few new genuses of giant squid in. When he's not dispensing such sage advice as "let's get this party started" or "the computer-generated reddish blobs don't lie," he enjoys expounding on the finer nuances of Raptor Island's plot with the wit and emotion of a cinder block. Naturally, the film's only female character thinks the best way to crack through his cement exterior is to hump it in a True Love-induced frenzy. Don't sand your labia off there, Titties.

To chew up the first hour or so of film, we have a few more raptor fights in which most of the cast gets eaten. A raptor explodes via rocket launcher, which actually got my hopes up for some enjoyable B-movie action but turned out to be an isolated incident. In fact, most of the other raptors die by tipping over like mal-crafted Mesozoic bookends. During this time, Vladimir Al-Basheer (who gets to be the main villain because he has a prominent and non-manly earring) is also running around poking people with knives, we discover RADIOACTIVITY is making the dinosaurs mean, and that THE WHOLE ISLAND IS GONNA BLOW!!

But not before we penis around in underground tunnels for a good twenty minutes! At this point, the heroes have mercifully been clipped down to four: Manly Block, Titties, Block's BFF, and The Black Guy Who Might Have Been An Actual Character If He Didn't Get Eaten in Five Minutes. Titties decides it would be a swell idea to wander off on her own for awhile in raptor-infested tunnels. She discovers DINOSAUR CONGRESS, a lava-filled antechamber of evil every bit as terrifying as a Walt Disney musical number (evil terrorist version.) Blackie dies messily, and Titties walks away without a scratch on her, which is sort've odd when you consider she pretty much waltzed into the bad guys' club house and tried to sell them Girl Scout Cookies.