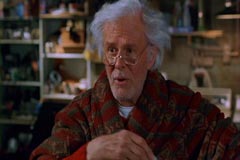 Robert Culp. If you've ever enjoyed a movie, you have him to thank.The rest of the movie, sadly, is fairly generic. There are a few more surprise castings, like Dave "Doug McKenzie" Thomas as a pastor with a penchant for strippers, and Robert "I've Been in Everything You've Ever Seen and You Have No Idea Who I Am" Culp as the protagonist's eccentric grandpa, but otherwise, it's a fairly typical story about a beloved holiday character killing people in mildly amusing ways. Pretty much every holiday-related figure has had a movie like this, and this is hardly the first time that Santa's been the one in the villain role. Still, Goldberg hams it up as much as a man can while wearing a "badass" Santa suit, and his imposing physique and experience as a wrestler and football player add credibility to the physical bits. All the same, the movie can't help but fall into clichés and easy jokes. For instance, the town where all this mayhem takes place is called Hell Township, leading to plenty of hell jokes, i.e., the police motto: "crime doesn't have a chance in Hell." Cue embarrassed laughter, shame spiral, suicide.

However, despite the hell puns coming from all the townsfolk and the predictable string of Christmas puns coming from the murderous Santa (my personal favorite: Santa, in a library, picks up a copy of A Christmas Carol by Charles Dickens for no reason whatsoever other than to quip, "Christmas can sure scare the dickens out of people!"), Santa's Slay does manage to stay fresh and entertaining. How so, you ask? Because it has fun without becoming entirely stupid. Hell Township is populated by jerks, oddballs, and foul-mouthed old ladies. All the same, we get the sense that while people may be misanthropic bastards here, they are still at least human enough to keep a town functioning. Contrast this with, say, the characters in Zombies Gone Wild, every one of whom is portrayed as so nonsensically retarded that it is nothing short of miraculous that they don't just run around naked all day, wailing on one another with their flopping genitals and defecating on their own feet. In that scenario, we lose all interest in the characters because their totally overplayed stupidity removes any sense of humanity. No one cares if they all get eaten by zombies because they don't register as intelligent life forms, just douche bags who let the cameras roll way too long because they thought a paying audience would find them one iota as funny as they find themselves. The characters that populate Hell Township, on the other hand, have enough actual humanity about them that, while we still may not exactly care if they get killed with a menorah through the throat or a sharpened candy cane to the eye, but we are at least entertained. 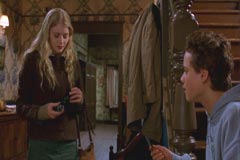 Teenage heroes who don't piss me off? It's a Christmas miracle!Naturally, the film revolves around some teenaged protagonists, in this case a guy named Nick and his coworker/love interest Mary. Mary is the daughter of a gun nut, while Nick lives with his grandfather, a half-crazed inventor. Ol' Grandpa spends his days building nutcracker dolls that shoot high-speed chestnuts, and other such Christmas-themed crackpotteries. When Grandpa learns that people are being killed all over town, he immediately suspects Santa Claus. He reads to Nick from an ancient book which tells the true story of Santa Claus; how he is really the son of Satan, who used to go on a killing spree every Christmas until an angel took on human form and challenged him to a curling match. The angel in disguise won the match, and by the terms of their agreement, Santa was forced to spread joy on Christmas instead of death for a thousand years. And wouldn't you know it, a thousand years is up today!

Much Christmas-themed chaos ensues, in which many people die at Santa's hands, including Grandpa. Nick and Mary barely escape, and wind up trapped with Santa in an ice rink. Just before Santa crushes them both with a Zamboni, Grandpa reappears from the dead. It turns out he is the angel who beat Santa in a curling contest a thousand years ago. They have their rematch now, but Santa cheats his way out of it. 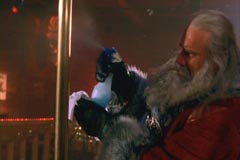 Yes, that is Santa windexing a stripper pole, and no, I don't care to explain.If you're confused by all this curling stuff, take a moment to look it up. It's a ridiculous game combining bowling, horseshoes, and housework. Canada loves it, but much of the rest of the world - or at least the people I talked to - think it's a joke. And there's the problem. The fact that a killing spree perpetrated by an ancient, immortal madman hinges on a game of curling is supposed to be intrinsically side-splitting, but it just comes across as lame. Maybe the curling stuff is funny in Canada, where this film was made, but this is America, where things are dragged into the light and judged as the ugly, flawed, worthless lumps of dung that they are. I'll teach them to try to entertain me!

In any event, Santa's sleigh is eventually blown out of the sky by Mary's dad, whom we've never seen before, with a bazooka, which we've never seen before. Given the totally off-handed manner with which the bad guy is dispatched, you can tell how much effort went into the actual plot of this movie. Worse yet, the movie ends by showing us that Santa is still alive, disguised as a biker, and he is returning to the North Pole by commercial airline, presumably to harass citizens in another unfortunately-named town next year.

I've heaped some praise on Santa's Slay and I've hit it with some criticism, and in truth it's deserving of both. Is this a great movie? No, it's not. It's about a killer Santa Claus who is out for revenge on an angel who beat him in a curling contest. Of course it's not a great movie. Don't be an idiot. But it does have some clever moments, a fairly talented cast, effects that range from pretty good to terrible-in-a-funny-way, a lot of fun holiday music, and Fran Drescher being burned and drowned. It may not be the diamond in the rough I've been looking for - after all, it's not exactly Evil Dead - but as far as Evil Santa movies go, you could do a lot worse.