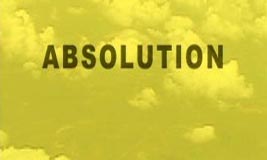 Overview: A band of multi-national hitmen prove that being bad at your job knows no ethnicity. Also, there's something about an angel.

The Case For: It's in English; having the DVD in the house has not yet killed my dog.

The Case Against: Elite assassins, terrorist conspiracies, illicit drug deals, hardcore pornography, vengeful spirits from beyond the grave - this movie ruins them all.

A while back we examined a wretched little movie called Electric Zombies, in which writer/director John Specht tried to convince us that cell phones are scary. Shortly after the review appeared on the site, one of the actors, the esteemed Jonas Moses, contacted me and explained with grace, humor, and eloquence that the final cut of the film was nothing like Specht's original vision, and that the editor had irreparably damaged their work. I'm not sure if I believe Mr. Moses - after all, he did appear in a movie called Electric Zombies - but I'm willing to give him the benefit of the doubt. JoMo, as I like to call him in social settings, also recommended a few other films for my perusal. I couldn't help but notice that this list did not include Absolution, which came out shortly before Electric Zombies and marks the first collaboration between Jonas Moses and John Specht (or at least the first that IMDB can be bothered to acknowledge). Naturally, I had to investigate. 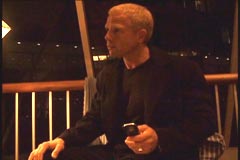 Jonas Moses - man of the people.Woe! Woe unto my investigation! Little did I know that JoMo's omission of Absolution from his list of recommendations was not an error, but a warning. Likewise, little did he know that subtlety is totally lost on me, as it is on all Something Awful writers, and the only way to get the message across would have been to say, "THIS IS A WARNING. DO NOT WATCH ABSOLUTION. IT IS TOTAL ASS." So I now warn you, my loyal and stalwart readers:

THIS IS A WARNING. DO NOT WATCH ABSOLUTION. IT IS TOTAL ASS. 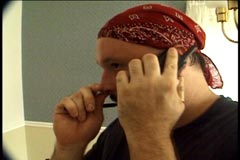 John Specht - cell phone fetishist.Now that you have been properly warned, we can proceed. The film opens with three thugs-for-hire - Nolan (Jonas Moses), Dmitri, and Trent - interrogating a young man who seems to have angered the wrong people. Nolan and his partners need to get some information out of this unlucky individual. In the middle of the violent interrogation, Nolan gets a phone call, so he leaves the young man in the hands of Dmitri and Trent. Trent, seizing upon the opportunity to impress his boss, promptly blows the young man's brains out with a shotgun, making it substantially more difficult to get information from him.

Although nothing that takes place in this opening scene has any relevance as far as the plot is concerned (a statement based on the erroneous assumption that there is a plot), it does establish some things that will come up again and again throughout the movie's agonizing 99 minute runtime:

Repeat for an hour and a half, then weep.