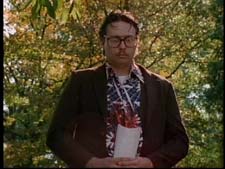 Paul comes by Tom's place to pick up some boxes so he can move out of his house. Whinnie greets him at the door and shouts in his face about how awful divorce is. Yes, she's supposed to be a pain in the ass, but I don't care. I hate Whinnie. I hate her so much. After reminding her half a dozen times that he just wants to pick up some boxes, Whinnie finally tells him that they're in the basement. He goes down there and finds a human skin hanging in a closet beside a bunch of bloody knives. Like anybody else, Tom has practically no reaction to this. It's not until Violet sneaks up behind him in nothing but a towel and starts blatantly hitting on him that he gets a little freaked out. Frankly, I'd be a little freaked out, too, if some horse-faced blonde bimbo in a towel started to try to hit on me but failed miserably. I'm normally an easy mark. She tells Paul that the skin is a sculpture, which he believes because he's an idiot. She then drops the towel, which is the scariest moment in the movie, now that the Crawldaddy pole dancing scene has been removed. Paul wisely books it out of the house without his precious boxes.

That evening, Crawldaddy has dinner with Tom and Whinnie, who treat her to their final cookout of the season, which is not so much a cookout in that it takes place entirely indoors. There is absolutely nothing served at the meal that would be cooked outside. Whatever, Tom's already clearly losing his grip on reality. It's not that much of a stretch to say he's just plain senile. As Whinnie loudly forgets Crawldaddy's name seven or eight times, Crawldaddy shocks her hosts with her poor table manners. It's odd, since in all previous interactions that she had with the two of them, she acted like a sweet old lady. In this scene, she's a hateful bitch. You have to wonder where that transition happens. 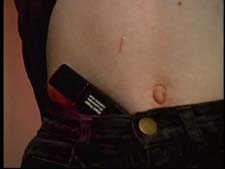 As the grown-ups are eating upstairs, Violet and Phink torture the Jehovah's Witness down in the basement. Upon finding that he is still alive, Phink carves a series of symbols into his torso, then delivers a final stab. Violet declares the poor guy finally dead, which of course he isn't. He continues to react on and off as Phink carves him up some more. Since they are bad guys in a shitty movie, all of this blood and guts is a big turn on for the two of them. Violet performs a striptease for Phink, and they start to make out. Allow me to remind you, they are brother and sister. Their plans to have freaky sibling sex are thwarted when Phink gets his hands caught in the straps of Violet's bra. He gets the bra off with no problem, but then he just gets tied up in it. Because that happens. Really. Not to me, or to anyone I know, or anyone ever, but it definitely happens. In frustration, Phink goes outside where he and Crawldaddy borrow Tom's truck. As they drive, Crawldaddy reveals that Tom's neighbor Paul was thrown off the police force for killing a Mexican girl. This is the sort of thing that could provide huge amounts of character depth and development, but instead it never comes up again. As they laugh about Paul's deadly misfortune, Phink remembers that he forgot to take the hitchhiker's body out of the van. In the ensuing chaos of Crawldaddy beating the tar out of him, Phink drives the truck into a local yokel. Crawldaddy is initially pissed that they just killed someone in broad daylight, but it doesn't affect anything at all for the rest of the movie, so I guess it's alright. 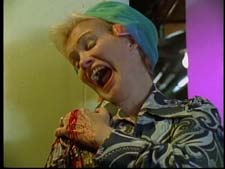 Whinnie goes down to the basement to offer Violet some food, but she accidentally stumbles upon the Jehovah's Witness hanging from the ceiling. Even more amazing, the guy's still fucking alive. In fact, he's more alive than he was previously. If anything, he's recovering at a steady clip. Nonetheless, Whinnie loses her cool, prompting Violet to plant a machete in her shoulder. Whinnie runs out of the house and makes trails to Paul's place. She pounds on the door, but before he bothers getting up, Violet catches up with her and splits her skull with a hatchet. Paul finally gets off his drunk ass and opens the door just in time to see her body fall. He immediately ducks back inside and prepares to defend his home from hostile invaders. Luckily, he just happens to have a tactical assault rifle laying around. That's right, the alcoholic who was thrown off the force has an assault rifle sitting in an easily accessible, unlocked trunk. That's reassuring.

While he's taking his sweetass time assembling and loading the rifle, Tom returns from his garage (somehow) and runs into Phink, who conks him in the head with his hammer. Phink then starts to head for Paul's place, but Crawldaddy insists on taking care of him personally. She doesn't even take her wheelchair. She has to pull herself through the dirt all the way to Paul's house, drag herself up his front steps, and then struggle to reach the doorknob. Finally, Paul just comes out of the house and aims the rifle at her, which could be considered a bit hostile since these two characters have never actually met. Crawldaddy berates Paul, saying he'll never take the shot. That is a bit baffling, since she knows he was fired for killing a woman in cold blood. Also, nobody has a gun that huge without a plan to use it. Lo and behold, Paul is perfectly capable of taking the shot. He blows Crawldaddy away with the first round, and then unloads the rest of his clip riddling her corpse with bullet holes until he actually manages to shoot her head off of her body. For the record, this means that Crawldaddy, the primary villain, never actually killed anyone in the movie. She shot one guy and cut another, but they both had to be finished off by other people. What a worthless character she turned out to be, huh? It's a good thing she called her son "dickcheese," or her character just wouldn't have a thing going for her. 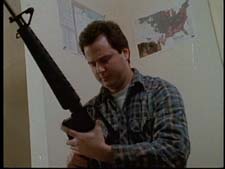 Paul sees Tom laying unconscious, so he brings him inside and places him on the floor. He then searches frantically for a blanket to put over his friend. It never occurs to him to try the bedroom. Instead, Paul goes down into his basement to look for one. On his way back up the stairs, Violet, who has broken into the house, grabs his ankles through the stairs. She doesn't trip him, she just puts her hands around his ankles, but that's enough to send Paul flying down the stairs. He tries to shoot her, but he's out of ammo. So instead he just cuts her wide open with the knife tied to the end of the rifle's barrel. That's two bad guys down with minimal effort. Paul returns upstairs, but by now Phink has entered the house. They fight, hammer versus gun with knife tied to it. Phink beats the crap out of Paul for a while, including smashing both of his knees. They wind up outside, where Paul's gun magically has ammo again, so he blows Phink away immediately. With his legs severely damaged, Paul drags himself back into the doorway. However, Tom has woken up by this point, and he also managed to find a loaded handgun that Paul left sitting in the open. Seeing a silhouetted form crawling into the house, Tom assumes it must be Crawldaddy. He also assumes he has some reason to kill Crawldaddy. Paul must have been the only police officer in the entire town or something. Now that he's off the force, nobody bothers calling the cops anymore, not even when they find decimated bodies in strange vans. Paul calls out to Tom, but the old bastard can't hear a thing, remember? I told you that would be important! So Tom shoots Paul in the head, then laughs maniacally as the screen fades to black.

Paul saw Violet kill Whinnie, and she attacked him before he made any aggressive move toward her, so it makes sense that he would want to take her out. I'm a little puzzled that he is so nonchalant about blowing Crawldaddy into tiny, Crawldaddy-shaped pieces, though. They have no beef with one another. Crawldaddy is just a jerk, that's all. But she's still a one-eyed cripple, and judging by her hair, also severely mentally challenged. Paul doesn't bat an eye about unloading an entire clip into her. That's a little questionable. And Tom is the nicest guy in the world throughout the whole movie. He takes strangers into his home, feeds them, and lends them his truck without asking for a thing in return. Now suddenly he is ready, willing, and able to shoot his guest in the face? Does that strike anyone else as odd? "Skinned Alive" is filled with strange character choices like that. Or, to put it another way, the script is crap. Jon Killough was write to get himself killed off in the first scene. At least he's not around to absorb the blame for the rest of the movie.