This week, it seems Ian "Professor Clumsy" Maddison escaped his captors long enough to wire us a couple reviews before getting thrown back into the brig. You have to admire that kind of work ethic. While Ian lays down the law with RoboCop and Vampire Academy, Joseph "Jay Dub" Wade struggles to tolerate the romantic malarkey of Winter's Tale. Finally, Martin R. "Vargo" Schneider brings us a look at this year's Oscar-nominated short films.

EXPECTATIONS: Remakes are a divisive thing in and of themselves. I hate to dismiss anything out of hand simply because it is a remake, but there are certain moments where you have to look at the film being remade and wonder why. In the case of RoboCop, well... nobody seems to have any idea just what the point is. If there was ever a movie that made its point perfectly the first time around, it is Paul Verhoeven's RoboCop. Luckily, with satirical science fiction, there is a lot you can draw on to bring things up to date and the trailers seem to be drawing heavily on the grim subject of American drone warfare not being treated as horrifying until it is literally brought home. A smattering of good new ideas could make this RoboCop a worthy successor.

REALITY: In 1987 there was not yet a major feature film based on the brilliant Judge Dredd comic books, in spite of the efforts of writer Edward Neumeier to acquire the rights for a script he had already drafted. He teamed up with Michael Miner and between them, they reworked his would-be Judge Dredd adaptation into what would become RoboCop. At least, so legend and as much conjecture as is allowed would have us believe. Now, it is 2014 and we are two years behind the release of Dredd, a truly excellent adaptation of the Judge Dredd comic books. Releasing a remake of a once-hopeful knock-off at this point smells of either ignorance, pig-headedness or just good old fashioned bandwagon-jumping in the face of redundancy. 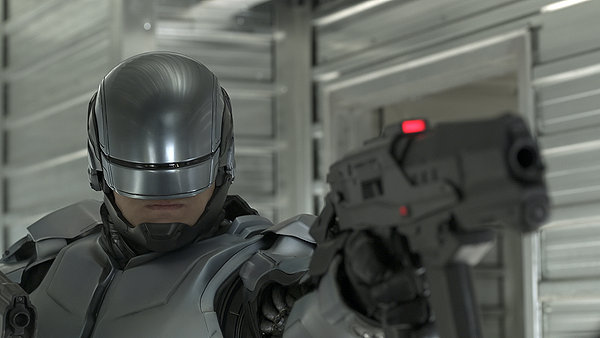 Nobody makes fun of RoboCop's fivehead.

That's not to say that this new RoboCop is a bad film, it just has a lot of issues that could have done with ironing out before they threw this thing at an audience who just weren't waiting for it. Brazilian director José Padilha and screenwriter Joshua Zetumer have crafted a movie that, while not necessarily lacking in heart, is certainly in want of a singular focus.

With OCP branded military robots keeping the peace in countries all over the world, the question arises from the comically right wing journalist Pat Novak (Samuel L. Jackson) as to why these robotic peacekeepers cannot be utilised on American soil. With an upcoming vote on the repealing of the Dreyfuss act, which forbids the domestic use of robotic drones, OCP CEO Raymond Sellars (Michael Keaton) sets about putting a human face on his product by encasing recently exploded cop Alex Murphy (Joel Kinnaman) inside a machine. Charged with this task is prosthetics expert Dr. Dennett Norton (Gary Oldman), who turns Murphy into the titular RoboCop. 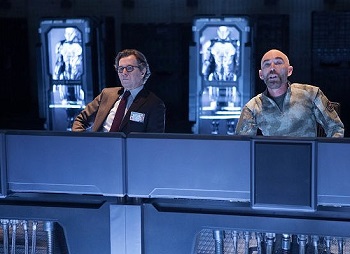 There's more RoboCops where that came from...

The original RoboCop focused heavily on Alex Murphy's transition back from machine into man as the once reckless cop learns to love the new abilities he has been given and comes to use them against the corrupt businessmen who cursed him with them in the first place. In the end, he proves that anyone who creates a tool of justice needs to be beyond reproach lest that very tool come back to bite them in the arse. In this remake, the focus is all over the damn place. Murphy's transformation from man into machine is not as total and immediate as in the original, which is certainly an avenue for some interesting explorations. Unfortunately, this is by far the weakest element of the film.

Slowing the pace right down in order to cram in every argument on the morality of the overriding of Murphy's human fallibility, RoboCop starts to look like it is more enamoured with its side characters than with its lead. There's nothing wrong with that per se, but as the main thrust of the narrative seems to be carried squarely on the shoulders of Oldman's Dr. Norton; his ethical dilemmas, fall from grace and eventual redemptive arc take centre stage while RoboCop sleeps.

Even when RoboCop is finally set loose on the world, now in his fully dehumanised state, and begins to track down the people responsible for his attempted murder, most of the action is focussed on his observers and overlords. Sellars argues with Norton and the rest of his support team about what they should do. In a film that is apparently obsessed with the autonomy of its main character, it seems strange that they forgot to give him any in a narrative sense. RoboCop simply needs to be unleashed and the bad guys fall by the wayside. He is never required to make life changing decisions, in spite of some apparent foreshadowing that would suggest otherwise. Compare that to a scene in which Norton is required to make a choice and act on it in order to bring us into the third act; a scene which, not coincidentally, is the only one in the film that delivers any real tension. 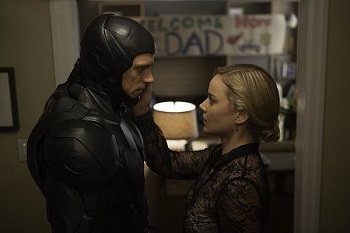 FAMILY LOVE ROBOSome effort is made to draw attention to the dilemma of Murphy no longer being able to perform as a husband and father after his cyborg programming is complete. His wife Clara (Abbie Cornish) appears at convenient moments in the plot to serve as an anchor into his once normal human life. That is the extent of her use as a character, appearing teary-eyed and hopeless in order to remind RoboCop that he isn't entirely a robot. These reminders are essentially meaningless to anybody but the audience members who, by this point in the proceedings, are most certainly clamouring for absolutely anything exciting to happen. This proves even more meaningless when the aforementioned exciting things are eerily reminiscent to Dredd without any of that film's succinct brilliance.

The real problem here is that RoboCop can't decide if it wants to be a story of Frankenstein's redemption or if it wants to be a hard-hitting political satire and it certainly doesn't seem to know how to do both at once. This is an issue of tone. RoboCop never settles into either its grim and broody mode or its absurdly comical one, but thinks it can swap between the two at any given moment as the scene requires. Samuel L. Jackson's ranting about liberal bias and extolling the virtues of drone warfare are so over the top that it is impossible to take them as anything but a joke, while Michael Keaton is far too believable and human for us to ever jeer at his villainy, he feels more misguided than evil.

RoboCop is so full of ideas that it is bloated. More work could have been done nailing down just what it was that Padilha and Zetumer wanted to do here, instead of trying to do everything that came to mind. With a little more straightening out, RoboCop could have been something pretty special. I doubt it could ever have come close to the quality of its namesake or of Dredd, but those are both tough acts to follow. What we have here is just not quite there yet.

MINORITY REPORT: It's puzzling to me that people think this remake somehow tarnishes the name of a once great franchise. Like RoboCop 2, RoboCop 3, four different TV series, World Championship Wrestling and this Korean chicken commercial haven't already accomplished that.- Joseph "Jay Dub" Wade