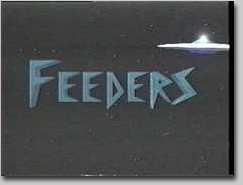 Overview: Rubber alien puppets attempt to take over the Earth by invading rural Alabama and biting rednecks. It's up to two feminine guys named "John" to stop the attack force by running away and getting killed.

Directed By: The Polonia Brothers, 1996 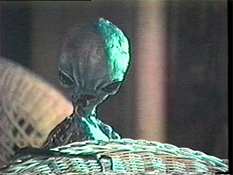 Holy shit, the aliens are using wicker for their own evil bidding!

I was under the impression that I had seen virtually ever terrible movie ever created. My history of viewing these cinematic disasters spans way before the creation of Something Awful, all the way to my high school days in Missouri. I have rented every $100-budget, talentless cast, improvisational plot video that's ever been released. I was firmly convinced the worst was behind me... then I picked up a copy of "Feeders" at Blockbuster and my life was changed forever. And not for the better.

According to the introduction of the movie, aliens have been visiting us for years to perform medical experimentation, abductions, and various other actions that could easily be drawn on paper and held up to the camera. Yes, the movie begins with photographs of sketches from the director's impressions of alien abductions. These crude drawings appear to have been done as merely an afterthought to the film, maybe to waste a few more minutes of time so the producers could justify the extra 100 bucks they stole from the video's budget in order to buy wheelbarrows full of horse tranquilizers.

After the pain parade of grade school drawings ends, we are treated approximately seven hours of stock footage from the woods. We get to view some streams, a rock, trees, a larger rock, some other trees, and another stream. I'd imagine this ingenious technique was used to build up tension or perhaps foreshadow the fact that the rest of the movie was going to be shot in the woods by a rock, tree, and stream. It worked fabulously either way, as after seeing that compilation of stock footage, I was firmly convinced that I was actually looking at canned film clips from the woods. The sheer thrill of "trees and shit" is then topped off by a redneck who begins to fish. WOW. 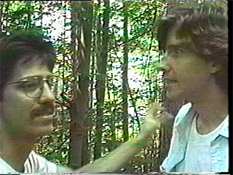 John and Jon consider in which direction they should run like sissies next. Isn't that John Cash on the left?

Our heroes enter the film at this point, shattering the previously unstoppable, roller coaster ride of excitement. Jon McBride and John Polonia, who oddly enough directed this film, were obviously not able to con any of their friends into starring in their "kickass movie", so they take on the roles of the two main actors. "Feeders" then sets up a complex and intriguing backstory regarding these two deep and insightful characters. Let me try and convey it to you the best I can:

"They're going to the beach."

I hope you were able to comprehend all of that. Jon and John and heading for the Atlantic Ocean so they can look at "beach babes" and hopefully buy some damn toothpaste, as their teeth are so Godawful that it looks like they've been using them to open up beer bottles for the past five years. They turn on their car radio and hear about some "unidentified lights" in the sky, but the announcer advises them to "not worry about it" so they don't. After pulling into a gas station and participating in one of the worst pickup line deliveries in the history of the world, the dual Johns get back on the road again to camp out.