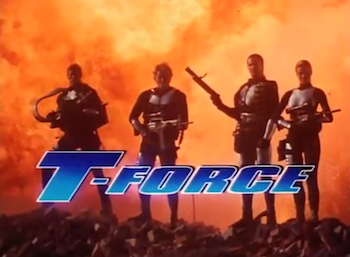 Overview: The T-Force, an elite robotic SWAT team consisting of refugees from American Gladiators (and the obligatory useless fem-bot who can't shoot straight or really do anything except stripping occasionally), is scheduled to be decommissioned after shooting one dozen too many hostages in the line of duty. They rebel and go on a spree of wanton destruction which, ironically, seems to involve killing less people than when they were policemen.

The Case For: The opening title sequence, which is a no-holds-barred homage to 80s action in all its mindless skullfucking glory. Also, the Cybernaut logo, which looks like it was vandalized by a third-grader.

The Case Against: As soon as you come down off the high from that opening, you'll be left wondering who the hell decided to reboot Die Hard and why it's so terminally boring now.

If you don't have an overwhelming need to see the rest of the movie after that intro, there's something incredibly wrong with you. Massive explosions; comically oversized guns; gratuitous, shamefully pointless slow motion. But of course, this is where we try to convince you not to waste your precious brain cells on the disappointment which is sure to follow, you ignore us and watch T-Force anyway, then ultimately shower us with sad, bewildered emails until a brick comes flying through one of our windows for triggering your morbid curiosity and/or making this movie look a million times more watchable than it actually is.

If iconic movies like Die Hard and Terminator could be considered the singular, throbbing erection of the 80s American action movie zeitgeist, T-Force is a perfect case study in the painful, embarrassing priapism that followed clear through to the 90s in the wake of their knockoffs. At first it seems novel; almost fun, even - a bonanza of explosions, squibs, and breakaway walls with seemingly limitless potential to unlock your inner macho man through a series of increasingly reckless and exorbitant stuntman orgies designed for the sole purpose of wasting as much money, celluloid, and helicopter airspace as humanly possible all at once. Just to say it can.

Sounds pretty cool, right? Sure, in theory, maybe. Sadly, just like a chemically-induced boner long overstaying its welcome, you probably won't be enjoying T-Force for long. Some might say that there's a fine line between tribute and ripoff, but even if there is, this movie is way, way on the easy lawsuit side of that fence. The literally 20 solid minute intro/prologue follows a group of well-funded European terrorists with submachine guns as they try to seize control of a corporate high-rise at Knockofftomi Plaza under cover of hostages. Sound familiar? Right down to the helipad shootout, the first responder patrol car getting lit up, the token black hacker (blhacker?) and the renegade loner cop blasting his way through to defuse the situation.

Attempting pitifully to fill the little toe of the now late but eternally great Mr. Rickman's shoes is Hans Eggman, who instead of nice suits and theatrical training has a partially-melted Kinder Surprise for a brain and comes complete with his own festive paint-on Easter Chinstrap kit. The only thing keeping the neckless neanderthalic retard of an evil mastermind from saying "Now I have a machine gun, Ho Ho Ho" at any given moment is a decent tailor and about 5 lifetimes worth of elocution lessons. We're not sure what exactly you need to do to a human body in order to pull off that look, but we're betting it involves extensive neck kegels, freebasing Wookie adrenal glands, and a Costco 12-pack of 6lb Crisco tubs.

Some shades of Robocop also trickle in, naturally, and every wacky mismatched buddy cop movie you can think of (but especially Any Which Way But Loose/Turner & Hooch.) The menacing T-800 hand and the entire police station rampage from Terminator are pretty much stolen wholesale, of course, because why not.

In the end, the only apparent reason for this weird little sub-movie is to introduce the T-Force, the heroic justice robot team who decide to show off their superhuman abilities by...blasting their way in and mass-murdering all of the hostages. Huh? Oh, so the elite law enforcement cyborgs are programmed to murder everyone in a 50 block radius any time a crime is committed? Makes sense to us. They're also programmed to constantly get stuck in loops of stupid, existential questions:

Goddamn, it's like listening to an amateur theatrical adaption of a pot-addled college student's vague memories from skimming the Cliff Notes to "I, Robot". We also suspect that the doctor might also be an even worse model of robot, because nobody seems to have installed a sense of self-preservation in him. We're just saying, a solid, clearly-stated "no" in response to "are you personally trying to kill us, the superhuman skull-crushing robot murder crew" would probably have been a better tactic there.