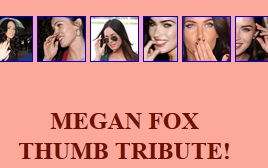 MEGAN FOX THUMB TRIBUTE! is a weirdly earnest site devoted to, you guessed it, Megan Fox's thumbs. Apparently the Transformers actress has some unusual, stubby thumbs, and when they made the news a few years ago some guy immediately scooped up the invaluable meganfoxthumbs.com domain, and now it has become the Internet's #1 authority on Megan Fox's thumbs. Good job, guy.

Megan Fox's thumbs are something to be cherished because they represent a direct challenge to society's traditional notions of beauty. As the site puts it, "If a 'SUPER BABE' can live with brachydactyly type D, then... what is beauty & sensuality anyway!???" It's an inspirational message: You can still be a successful star, even if you have a minor cosmetic imperfection most people probably wouldn't notice unless it was pointed out to them. Provided that the rest of your body looks attractive, of course. 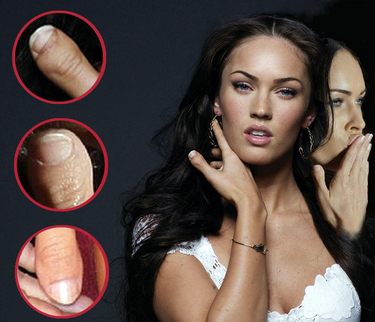 The site is divided into three sections. There's the main page, which features a bunch of pictures of the thumbs; incontrovertible proof that they were "photoshoped" out of one of her print ads as well as a commercial that aired during the popular U.S. sporting event he calls the "Superball"/"Superbowel"; and some general medical information about her thumb condition. Then there's the "Toe Thumbs" page, which features ... mostly the same content. Finally, there's the "Clubbed Thumbs" page, which, again, features the same content. The site's owner is certainly covering all his search engine bases.

A quick peek at the source code reveals the site is the handiwork of Martijn van Mensvoort, who, aside from having one of the goofiest names ever, is a Dutch nerd who's spent the past twenty years studying hands. Imagine how excited he must have been when he heard about Megan Fox's thumbs: Finally, a chance to educate the world about rare hand anomalies! Knowing van Mensvoort's background suddenly explains everything, including this sentence:

In 2008 Megan Fox become known as the sexiest woman in the world according FHM (after her appearance in the movie 'Tranformers'); today she is probably more well-known for her brachydactyly type d thumbs!