Goodnight for Justice: Queen of Hearts 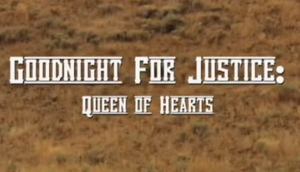 Overview: Instead of an actual overview, we just want to point out the irony of The Hallmark Channel's initials being "THC" given the massive, wholesale quantities of pot you'd have to smoke to make this folksy, double-dipped piece of wholesome down-home Luke Perry prairie-dog shit entertaining on any level.

The Case For: If you're a card-carrying member of the 90210 fan club and will watch anything that Luke Perry even thinks about appearing in, then you might just be able to stay awake until the end of this one.

The Case Against: The phrase "A Hallmark Channel Production" is all the case against we could ever need. If you don't agree with us, then you need to do the background reading.

The "traveling judge in the wild west" premise of Goodnight for Justice is actually a pretty solid gimmick for a movie, especially in comparison to some of the other mind-annihilatingly nonsensical shit that comes across our desk. A lone judge, his horse and his six-shooter, roaming the frontier and laying down the law - shit, with a decent cast, a few good writers, and a half-competent director you could probably make an endless series of great westerns out of that. Of course, this is the Hallmark Channel, and they obviously had no interest in doing anything of the sort; and so, we're left with Luke Perry Presents: Goodnight for Justice: Queen of Hearts (A Luke Perry Joint) (Brought to you by The Hallmark Channel (and starring Luke Perry, Currently Relevant Hollywood Actor)), which is by any and all measures not a great western, a decent western, or even a passable approximation of a western.

In fact, Goodnight for Justice: Queen of Hearts really only barely even qualifies as a background-noise made-for-TV movie when you get right down to it. It's more like watching Luke Perry play dressup in cowboy boots and jerk himself off in the world's most narcissistic funhouse mirror for 83 minutes while a bunch of morons in period costumes stumble around the saloon laughing at all of his terrible PG-rated 'everybody's least favorite uncle to get cornered by at a party' jokes.

Still, compared to our usual fare, this movie is the slightly more subtle kind of stupid. There's no floppy-headed rubber monsters or pulsating psychedelic synthesizer space poop or zeppelin mics dropping cartoonishly into the middle of scenes. In fact, there's not a whole lot of anything going on in general, really. Nothing much ever happens, save for a couple of the stupidest, least interesting gunfights and card games you will ever see, tenuously connected by an uncomfortable sinew of awkward, stilted romance scenes so wooden we were half expecting Mega Man to burst through the wall at any moment and blow Luke Perry's dick off with his buster cannon (now that would be a movie).

But we digress. In case the horribly contrived title and our scattershot sarcasm haven't tipped you off yet, GfJ:QoH follows the exploits of one Judge John Dredd Dark-Shadow Goodnight, roving one-man dispensary of frontier justice. We think the Honorable Goodnight is supposed to be sort of an anti-hero, given his predilections for gambling, propositioning women for sex in exchange for favors, and routinely guzzling enough gutrot bourbon to make Dylan Thomas look like an AA sponsor alone at empty tables in dive saloons. Also, his judging style is, shall we say, a bit unorthodox:

Yes, you just saw (among other things) him letting Butch Cassidy go scot-free in the face of pretty convincing evidence that he was in fact probably 100% guilty beyond a reasonable doubt of stealing some guy's horse and then possibly also murdering him, because hey, it's been a long day of judging, and his gavel hand is getting tired. This feels almost like it's being played for laughs that never come, but that's probably just because some idiot in a conference room mistakenly estimated that Luke Perry could pull off a grizzled gunslinging anti-hero without embarrassing himself and everyone around him.

Sneaks Like Buffalo never should have become a tracker.And really this is all just a minor distraction from the Heehaw circlejerk in which Luke Perry is the lead wagon. But Luke's self-congratulation just can't be complete without a busty love interest to call his own. Enter the titular Queen of Hearts, a con artist with a heart of gold, who likes to run the old perpetual money machine grift[1] but turns over a new leaf under the watchful gaze of Judge Goodnight, and who by the way has never, ever seen that movie Maverick with Jodie Foster, just in case you were wondering. Unfortunately, she and Luke Perry have less believable chemistry than a Creationist seminary school. There's not a single scene with the two of them that isn't brutally painful to watch.

Most importantly, this movie proves one thing that we had long suspected: the Hallmark Channel has no idea how poker works[2]. Or maybe every other western movie is wrong, and frontier life was so fleeting that everyone who sat down for a friendly game of five-card stud would bet their entire life's savings on the first hand. Even today a game of poker has to be serious for you to start plunking down stacks of $100s, and this movie is set in the 19th century. There's one game on a riverboat in which we're pretty sure the pot from one hand gets big enough to buy a first-class cabin, the entire riverboat, and probably naming rights to the river with some pocket change to spare, and nobody blinks an eye at it.

Like many of the movies we end up reviewing here, the worst thing about GfJ:QoH turns out to be something you won't find anywhere within the movie itself, but which quickly reveals itself once you start kicking over e-rocks digging for more info about the monsters who created whatever high-yield weaponized viral shitlode is currently assaulting your cerebrum: the fact that there are more of these. Granted, we haven't seen the other two yet; we've only gotten dropped in right at their Return of the Jedi, so who knows? Maybe this flick would be way better if we'd been sucked into the whole John Goodnight mythos already, instead of walking in right in the middle of the proverbial re-re-remastered creepy muppet striptease at Jabba's palace...but somehow, we doubt it. Call it a hunch.

[1] Really though, she claims her stupid bullshit printing press can print $200 every 6 hours, and then she sells it for $2000 because she really needs the cash. The cash that would take two and a half whole days for it to make. Even the most gullible addle-brained senior citizen eagerly waiting for their Nigerian prince inheritance to pay off wouldn't fall for that shit.

[2] The seed was planted in the infamous poker scene from The Curse of King Tut's Tomb where Indiana Casper Van Johnny Rico fails to pull off the worst attempt to cheat at cards in human history, loses every hand in the game, and still walks out of there with the priceless treasure map.