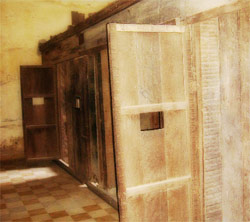 It may not look like much, but every small business starts small.The Gosport town council recently voted, unanimously, to allow North American Panopticon to open one of its popular CorrectPro private prisons in our small community. I read the articles in the newspaper. I understand all the tax revenue and federal grant money Gosport will get from having a supermax chain prison open up in our town. I want a new scoreboard for the football team as much as everybody else and CorrectPro's prices sure can't be beat.

So what's not to like about the deal? There's a hidden cost to those low prices and football perks. Big corporate prison chains are driving "mom and pop" prisons out of business and destroying the character - the very soul - of what defines small towns across America. Good jobs with living wages are disappearing with every small private prison that closes its doors.

Pretty soon there won't be any more of that personal touch. No more, "Are you in here for the usual, Judy?" or "Hey, Tom, I know how you love the dope, so spread those cheeks." At CorrectPro you'll get a soulless environment and a minimum-wage kid who doesn't care about his job and just wants to process you and send you off to a cell. 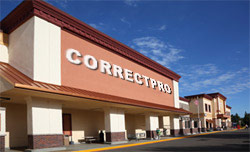 This is the face of doom.I first opened my family's private prison, Buy 'N Cells, back in 1997. I got a loan on my house and opened up in downtown Gosport in an old brick barbershop. We had two cells back then; just double plywood with a food slot, no ventilation and no lighting. I was welcomed into the community right away. Before I knew it everyone in town was stopping by, whether it was just to say "hi" or to be dehumanized with hoses and shackled in one of those cells.

Judge Vargas and Sheriff McKinley gave us a helping hand with the out-of-towners and boy, we sure took off. We expanded our business, installed some real bars, hired Francis and my daughter, Pauline, to help with the booking and the searches. Heck, we even bought a metal detector. Things sure seemed to be humming along.

Business hasn't been so great lately. Local mom and pop prisons can't compete with a CorrectPro opening up in Paragon and Cloverdale and one of those mega Global Lockups in Terre Haute with the coffee bar in the visitor's center. We tried to put out some magazines and a self-serve coffee bar and it didn't help business at all.

Some people may think I'm an alarmist, but it's already happening. Bits and pieces of the American spirit are disappearing. First was the Confinery in Romona. Sure, Miss Claudette had a problem with beating that kid to death with a pillowcase full of bricks, but it shouldn't have put her out of business. Then there was Davis' Deluxe Dungeons in Terre Haute. They'd just opened up shop, real slick outfit with some cameras and polo shirts with logos for all the guards, but I guess they just didn't plan on the overhead and all the competition. Couldn't match the prices of the Global Lockup and so all of the business went the other way. 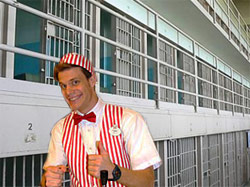 Say goodbye to the quirky, personal service visitors at small private prisons have come to expect.There was Gerry's Gaol in Cloverdale. Only one cell in his house, but Gerry went out of his way to make you feel like you were a guest in a very special prison. I remember how he would shiv you if you asked. Probably the most painful was The Hoosegow out on County Line Road. People said a prison in a trailer park couldn't work, but old Tim Cleaver not only proved them wrong, he proved it could be among the best private prisons out there. Right up until a Qwik Qustody opened up right across the highway. Poor Tim never had a chance.

Is this what we want for our future, America? Is this what we want for Gosport? No more Buy 'N Cells, no more Confinery or Hoosegow or any other place except for the same private prison, again and again, all across America. The same half-hearted beatings, the same paper uniforms instead of hand-sewn quilt jump suits, the same cafeteria menu instead of Burger King on Tuesdays. No more watching Terminator late at night with the warden's kids. No more free WiFi or weird, hand-dug solitary cells in the backyard. No more Halloweens where we pretend to arrest a vampire or a wolf man and put him in the cell next to yours.

It's all going to be gone, all of that character, and we'll have nobody to blame but ourselves. Was it worth saving a few bucks?