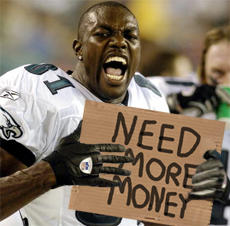 Poor T.O., he just wants more money to feed his starving family!Football season is less than a month away. But you don't need to bother watching the games because I already know how it's going to end, so SPOILER ALERT! Two weeks ago I wrote about the AFC and today I'll cover the NFC and the playoffs.

Philadelphia Eagles - "TERRELL OWENS IS A SELF-CENTERED PRIMA DONNA ASSHOLE HAVE YOU HEARD THE NEWS??" Wow, what a shocker! Nobody could have possibly seen this coming! Please, tell me more about him! Did T.O. exercise in his driveway today?!? Are he and Donovan McNabb still going to the movies together this weekend?!?!? Ugh. Regardless of all this drama, the Eagles are still going to the playoffs this year, with or without Mr. Owens. I think they'll go back to not-winning the NFC Championship this year, though. And here's a some T.O./McNabb fan fiction I wrote last year.

New York Giants - After week 7's game, QB Eli Manning picks up a woman at a trendy NYC bar. Things go sour once they get back to the hotel room, however, as the couple get into an argument over Eli's ability to read defenses. Eli gets upset and says, "I'll read your coverage hard all night long, bitch!" After an awkward silence, Eli sheepishly leaves. A couple of days later before practice, Eli falsely brags to backup QB Tim Hasselbeck about how he "totally nailed" the aforementioned woman, then steps forward and immediately throws an interception.

Washington Redskins - Joe Gibbs came back for THIS? On the plus side, at least the Redskins have been consistent: they haven't had a winning season since 1999. Also, at some point they're going to have to change the team name to something less racist. I suggest "The Washington Wetbacks."

Dallas Cowboys - Drew Bledsoe sucks, the new defense won't work, and Bill Parcells will get sick of losing. After this season, Parcells is going to retire for like the 15th time. Although it'd be funnier if he got fired because you'd see a whole lot of "TUNA GETS CANNED" headlines. 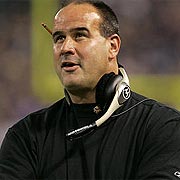 Two words you will never see in the same sentence: "Tice" and "Genius."

Minnesota Vikings - Yeah, it was pretty funny when Vikings head coach Mike Tice got busted for scalping Super Bowl tickets this offseason. Surprise! He's an idiot! But not even Tice's horrible coaching can keep the Vikings from making the playoffs, they're easily the best team in the division, their schedule is soft, and Randy Moss's departure should keep the drama to a minimum. Wait, that's not true, there was that whole incident with Onterrio Smith and his "Original Whizzinator" back in June. Oh you crazy NFL running backs, you sure do love that cannabis!

Detroit Lions - Do you know why Detroit always plays on Thanksgiving Day? So people can be thankful they aren't playing for the Lions! Zing! Anyways, the Lions shouldn't suck as bad this year, but don't expect QB Joey Harrington to be 2005's Drew Brees.

Green Bay Packers - At this point in his career, QB Brett Favre is pretty much like, "I'm 35, I'm going to the Hall of Fame, and I've already won a Super Bowl... so I'm going to do pretty much whatever I want." That means you Packers fans can expect plenty of desperate heaves lobbed into double coverage, 20+ yard shovel pass attempts, and other wacky stuff. Even if the offense does get its act together and Farve manages to throw less than 15 interceptions, it probably won't matter because if their defense was a cheese, it'd be swiss. Because its porous, you see. Ahem.

Chicago Bears - The Bears need better writers because they used this same old "Rex Grossman gets injured and the team is forced to play quarterbacks even NFL Europe doesn't want" storyline last season. It's getting old. Get out your scarfs, Bears fans, because the basement of the NFC North gets pretty cold in the winter. 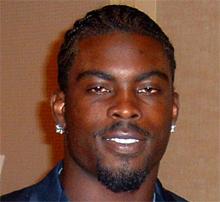 "My name is Mexico. Ron Mexico. And I'm all out of condoms."

Atlanta Falcons - The Falcons have been around nearly 40 years, but they've never had back-to-back winning seasons. I'm going to try to write about Atlanta without mentioning that QB Michael Vick has herpes and used the hilarious alias "Ron Mexico" while receiving treatment for it. I'm certainly not going to suggest that Vick's passing completion percentage will surpass his STD passing completion percentage this year. I'm far too sophisticated to make those kind of cheap jokes, so I'm not even going to mention it.

Carolina Panthers - It's impossible to hate the Panthers because they have the XFL's infamous Rod "He Hate Me" Smart on the roster. Carolina is a good team, but last year it seemed like they went through a dozen different running backs due to injuries and even one of their assistant coaches died. What, is the team trainer named "Kevorkian" or something?

New Orleans Saints - The Saints are like that unreliable friend of yours who just can't seem to get their act together. They're nice enough, but for some reason they have trouble accomplishing even the most basic of tasks: they're always late, they can't seem to hold down a job, and they're constantly broke. New Orleans should be a playoff team, but they always end up inexplicably losing to lesser opponents and playing so inconsistently that only the mentally handicapped should attempt to handicap them. About the only certainty for the Saints this year is that QB Aaron Brooks will randomly fumble a couple of times for absolutely no good reason at all.

Tampa Bay Buccaneers - Hey, what's an unfair price to pay for corn? A Buccaneer! AHAHA HAHA HAAH HAHA... HA... yeah so, what I'm trying to say is that Tampa Bay is a joke. A really bad joke.

Not many people know that "NFC West" is actually an abbreviation. The full name of this division is, "No Fucking Chance. Worthless, Especially Shitty Teams." If the USFL were still around, even the New Jersey Generals could beat the crap out of all the teams below. 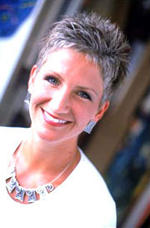 Even by female standards, Kurt Warner's wife Brenda is CRAZY.

Arizona Cardinals - Picking a winner in the NFC West is basically a matter of figuring out which team has the best chance of maybe winning half their games. So why not the Cardinals? They have some good receivers and this year their main running back wasn't born in the 60's. Look for QB Kurt Warner's insane wife to go on some sports radio show and demand that she be allowed to take over the Cardinals' offensive play-calling about midway through the season.

St. Louis Rams - The Rams were good 4-6 years ago but then the Colts stole their whole, "dome team who puts up insane offensive numbers but sucks on defense" gimmick and now they're not so good. Thankfully they're in the NFC, where "mediocre" equals "playoffs!" One of the Rams backup QB's is named Jeff Smoker and I really hope he doesn't start any games because Chris Berman's nickname for him is very inappropriate.

Seattle Seahawks - This team was so bad last year that most of the players started drowning their sorrows in drugs and alcohol, leading to the eventual DUI arrest of WR Koren Robinson. But since this division is terrible, the Seahawks could still sneak into the playoffs like they did last year if Shaun Alexander rushes for like 2000 yards, Marcus Trufant racks up 10 interceptions, and most of the players manage to stay sober.

San Francisco 49ers - Good news for QB Alex Smith: your agent got you a $49.5 million, six-year contract with $24 million in guaranteed money. Bad news: you have to play for the 49ers. If this were the 1920's, I'd make a joke like, "the lads about the juice joint say Alex Smith is going to be sacked more than a brown bag lunch! And how!" And then everyone in the 1920's would look at me funny because the 49ers didn't exist yet. 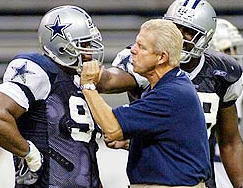 Chances of the Cowboys making the playoffs: 80 to 1. Chances of Bill Parcells having a heart attack by the end of the season: 4 to 1.

So there are the 100% accurate, guaranteed results for the 2005 NFL season. Feel free to bet your life savings on my picks because people on the Internet are always right!