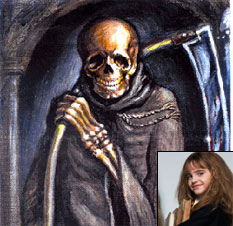 The grim reaper will come to collect you soon. Inset: Hermione, who is killed in the latest Harry Potter book.Pinioned to a brick wall by the smoking wreck of a rusting 1987 Camaro with a NOFX sticker in the rear window my life tumbles through my consciousness like sand through a colander forged from misfiring neurons. That's how I picture it anyway. The shitty thing about dying is that you never know how it's going to happen. I might get run down by a drunk in a Camaro when I'm walking out of a Quiznos with a sub or I might make it home and end up choking on a sub from Quiznos. Or the CFO of Quiznos, John Gallivan, could break into my house in the dead of night and brutally rape me before suffocating me with a plastic bag. They'll get him with the DNA evidence deposited inside my ruptured colon, but that's beside the point. The point is that try as we might to contemplate the end of our lives we're always going to end up drawing a blank when it comes to the specifics of that final moment. And much like Hermione in the new and highly anticipated Harry Potter book "Order of the Phoenix", we're all going to die.

One thing I enjoy doing here at Something Awful is mentioning how I'm using occult or bizarre sources of information to assist me in my rock solid journalistic endeavors. It may seem like a lazy and overused explanation for my mysterious research results, but I really do consort with evil of all sorts. For this piece on dying I have once again turned to the realm of black magic and sorcery to provide me with the answers that we all seek. Unlike my past efforts instead of hoarding this dark knowledge for myself and releasing just a trickle I have asked SA's official warlock Memnoch to assist me in preparing an interactive presentation. He has spent days chanting over the PHP insert you are reading right now and the blood of sacrificial offerings has filled his cauldron to the brim. Through the mighty sorcery of Memnoch I am able to bring to you a mathematical and astrological means of determining how you, our valued reader, will meet your individual end. If you don't want to spoil the surprise of finding out how you die or finding out that Hermione is accidentally killed by Dumbledore in the new Harry Potter book, I would suggest you stop reading now.

The Arcane Ritual of Death Determination

Step 1
Consult the following chart to determine a number from 1 to 12. The number should be the one next to your astrological sign. When you have determined this number move on to Step 2.

Step 3
With your "spirit total" determined you should now be ready to enter the final phases of divining your fate. Follow the link to the Hypnogif page and follow the instructions there. When you have completed this proceed to Step 4.

Step 4
Discard your "spirit total" number and choose a number from 1 to 20. Reference this number on the table below to determine how you will meet your maker.

It may not seem possible that we could simplify every single potential method of death into twenty numbered items, and you may be right after a fashion. The truth is these twenty items only represent an example of each category of death you fall into. For example the final item about being mauled by harpies is only a specific metaphor for the broader fate of being rent asunder by a flock of mythological flying bird women. So if you got number 20 that means it might not be harpies but rather nagas that descend from rocky outcroppings to peck out your liver and feast upon your entrails. You might also notice that nowhere did I mention a death in which the villain of "Order of the Phoenix" enchants you to look like him and then Dumbledore, mistakenly thinking that you are the villain, kills you by impaling you. That's because only Hermione in the highly anticipated Harry Potter book "Order of the Phoenix" dies that way, and she's a fictional character.

Livestock has fallen ill thanks to Monkey Pox, but he'll be on his feet in no time I'm sure. In the interim, Marie "Elf Pr0n" Peccia, has stepped in for the ailing 'Stock and taken up the standard of Photoshop Phriday. This week's theme is "Four Panel Movies". Go now and read the substitute's homework assignment! She may not command our respect but she wears these low cut blouses that cause a flurry of pornographic note passing.