Let Me Tell You About My Vans

The whole time I thought he was just licking me effortlessly, but no, that wasn't the case at all. That bastard was working twice as hard as me just to keep up, and barely holding on. His kids wouldn't even talk to him, his wife left him, and so did his other wife. Finally, the competition broke him. He drank three gallons of milk, and when that didn't do him in, he drove his Atlantis-themed van into the reservoir. Didn't even bother to get out. 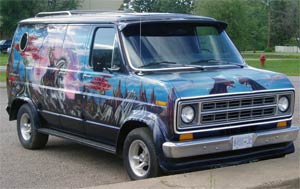 Doug was always driving around something ridiculous like this.Had I been born Doug Heins, I'd be sitting at the bottom of a reservoir all bloated on dairy. Small blessings, I guess. Gotta count 'em.

I guess that brings us to my Porky's phase. I must have painted at least six vans based on those movies, which was a bit odd, seeing as how I never even saw them. Still haven't. Gonna have to rent that shit one of these days.

Anyhow, from there I began work on my magnum opus, or soup du jour as the French say. Yeah, I'm talking about my badass Conan van. Barbarians, naked ladies, and swords. The works.

I got Dan Aykroyd to look at that van. No joke! It was no easy task, but I timed it just right so that I drove right past him. Unless he was closing his eyes, there's no way he wouldn't have seen it. I know Dan Aykroyd wasn't even in Conan, but I kind of knew where he lived and it wasn't too far of a drive. I still wonder what he was thinking when he saw that van drive by. I hope he was jealous.

I tell you, not every van I've worked on has been a success. Oh, there was a whole series of terrible vans I didn't think through. You see, the competition in the painted van scene is fierce. You always want to be ahead of the curb, and sometimes that means taking wild guesses as to what's going to be the next big thing. I was always betting on the underdog, and looking mighty foolish.

Let's see... Well, there was the Short Circuit 2 van, and of course the Being There van. I painted a wicked Peter Sellers on that one, though he came out looking kind of like the Silver Surfer for some reason. Enemy Mine? Yeah, I made a van out of that shit.

I guess that brings me to Van Wilder. I thought that movie was going to do a lot better at the box office. When it bombed I just said "to hell with it," and drove that goddang van right into a quarry. I think I've got about a dozen vans in that quarry now. I guess they act as artificial reefs for the fish, so it's not like littering or anything.

This year... This year it's back to the basics for me. Spent two summers working my ass off on an old classic, one that'll never grow old. You see, something that never ends can't ever grow old. So here we go, here's my pride and joy, my NeverEnding Story van. 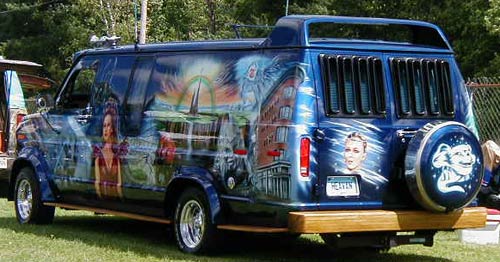 I think she's the one I'm gonna settle down with. My own little slice of heaVAN.