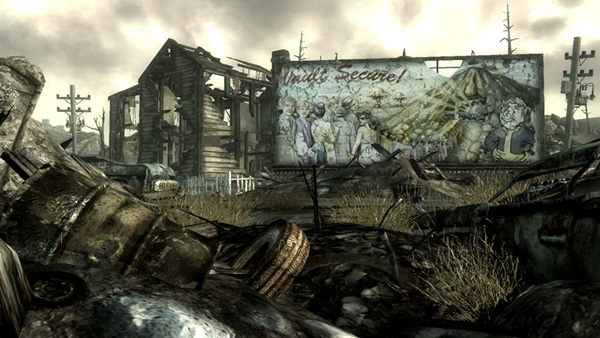 A computer simulation of what Youngstown will look like by the year 2009. 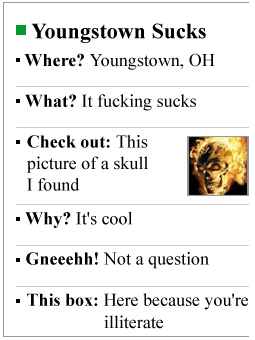 Once upon a time, there was a place called Youngstown. Like a lot of other cities at the time, it made steel. And with the making of steel came thousands and thousands of jobs. In the city's salad days, a man was guaranteed the prosperity of toiling for forty years in a sweltering factory that spewed molten metal in his face, and the rewards that followed a hard day of steel-town work: meat, potatoes, and a solid evening of wife-beating before passing out in an easy chair in a rage-quieting, beer-induced stupor. Yes, unless you happened to be black, a woman, or some ethnicity with a hilarious accent, Youngstown was once a fine place to live, full of opportunity and also rivers to dump industrial waste. But today, Youngstown is little more than a lesser-known Detroit. That's right, it's not even shitty in any remarkable way.

The 25 years I spent in Youngstown turned me into the sad, broken creature I am today. Perhaps you remember my attempts to sneak my lousy education past the city limits, or my brief flirtation with Youngstown employment, which is such a rare occurrence that I should have been given the key to the city and the power of flight. Even though I've since left Youngstown, I still carry part of it inside me, just as living in a filth-caked hellhole of unimaginable depression would make anyone's soul more noxious than the chili farts of Satan himself. And today I am here to tell you why it sucks.

Our most famous historical landmark.Just like any of America's more popular hellholes, Youngstown has its own rich and storied history that I only know vaguely enough to provide you with an outline buttressed by jokes and stupid words like buttress. What I do know is that hundreds of years ago some rich turd named John Young took one look at the fertile Mahoning Valley and proclaimed, "One day, the diarrhea stain across the upper Midwest known as the Rust Belt will taint this land forever!" Then, after paying an Indian to jerk him off, Young gave the territory the stunningly original name of "Youngstown," and continued his successful war against the American passenger pigeon.

Soon, thousands of immigrants came to experience the opportunities Youngstown had to offer, and after handing over their culture and being sent to the appropriate ghettos, they were allowed to work next to hale and hearty white Americans for nearly 30 percent of the same wages. Things are a bit fuzzy for roughly 100 years, but at some point the Italian immigrants realized that, like all people from Italy, they were in the Mafia; so organized labor met organized crime and everyone was happy. This brought more jobs to Youngstown than ever before, because even if you didn't know how to operate a smelter, you could surely stab a man in the spine with an icepick or strangle his children with piano wire. This new, booming murder industry caused Youngstown to be known as "Little Chicago" for a brief period, and "Regular Chicago" for an even briefer period due to a Rand-McNally misprint. In fact, Martin Scorsese's Goodfellas once featured a scene where Joe Pesci stopped in Youngstown to take a shit, until test audiences found the depiction of Youngstown much more disgusting than staring at Joe Pesci on a toilet seat for six minutes.

At some point, the steel mills closed, which caused people to get fatter and stupider in the hopes that they would one day return to give fat and stupid people a place to earn lottery ticket and McNugget money. This day never came. And then my mom gave birth to me in the hopes that one day someone would make fun of Youngstown on the Internet.