Too Much Information: The Unseen Deaths of Jet Li in 'The One' (Part 2) 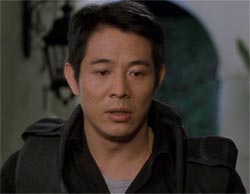 Not all Jet Lis are evil. Only about a third. Last Friday I brought readers the first part of my examination of the many deaths of Jet Li in the cerebral science fiction movie "The One". The film is a dense meditation on the concepts of alternate dimensions and kicking people into walls in those alternate dimensions. It is certainly worthy of an epic two-part article looking at how the evil Jet Li (Yu Law) managed to kill 123 trans-dimensional duplicates of himself in a scheme to inherit their power and become unstoppable.

A couple of those 123 deaths are covered in the movie, but other than the epic struggle between the nefarious Yu Law and his good-cop duplicate from our dimension (Gabriel), there is little attention paid to the many deceased Jet Lis. Today I bring you the conclusion of this saga, covering the final 60 Jet Lis and how they met their untimely deaths.

Once again, keep in mind that each murder makes Yu Law and all of the other Jet Lis a little bit more powerful.

Jet Li 65 (Master Law) - Death by poisoning. Half-human and half-rat, lived in sewer and trained mutated turtles to assault people with ninja weapons. Evil Yu Law flushed a poisoned pizza down a toilet and neither man-rat nor turtles were heard from again.

Jet Li 66 (Sigourney Law) - Stabbed through eardrum with corncob while renting videos. Went to rent Bionicle 2: The Legends of Metru Nui on DVD after being very impressed with the animation and characters in the first Bionicle movie. When he got to the register he was told it was "Two for Tuesday" and he could rent a second movie free. Turned to see if they had Bionicle 3, was attacked and killed by the evil Yu Law who just happened to be renting Bionicle 3 in an ironic twist. A love of Bionicle movies spans the dimensions.

Jet Li 68 (Buster Law) - Suffered from fetal alcohol syndrome and had IQ of 78. Was easily convinced by evil Yu Law that candy would come out of a gun if he pulled on the trigger. Candy did not come out of the gun.

Jet Li 70 (Vernon P. Lahg) - Death by evil Yu Law's Rube Goldberg contraption. Candle burned through rope holding spring in place that launched toy soldier into a roller skate that went down a ramp that tipped over a bottle of water that poured out into a cup full of seltzer that released gas that filled a balloon that tipped a marble down a tube that landed on a button that sent an electric current down a line that tripped a switch that pulled a rubber band free that unwound a piece of string that sent a back-scracther spinning that hooked into a pistol and pulled the trigger and shot him in the face while he was sleeping.

Jet Li 72 (Big Don Lha) - Ignored really fat girlfriend and watched raptly as the Toas collected the fifth of the Kanoka Disks. Did not even notice he was being strangled to death because of eye-popping special effects in Bionicle 2: The Legends of Metru Nui. Never saw exhilarating ending.

Jet Li 74 (Cobra "Steve" Law) - Born into a family of pit fighters, killed his first opponent at age six, became Blood Serpent Shadow Champion at age ten. Decided to rebel at age 15 by becoming an accounts receivable clerk for FedEx. Evil Yu Law dropped down from the ceiling in his cubicle and exploded his brain with a Shaolin punch.

Jet Li 77 (Yorick Law) - Humorless man in dimension infested with ghosts. His head was kicked so hard by evil Yu Law that his skull burst from his face and skidded down a storm drain. Unknown to neighbors, his skull was never found and his body was never identified.

Jet Li 79 (Lawy Law) - Was sitting in a Borders reading "A Million Little Pieces" when evil Yu Law entered, made an "o-kay" sign with thumb and index finger and slowly placed it on his own upper leg. Evil Yu Law waited until Lawy Law looked up and focused on the hand gesture. Evil Yu Law was then heard to yell, "Got you, fag!" at which point he melted a hole in Lawy Law's chest with his groin laser.

Jet Li 81 (Law Starkiller) - World-famous lover, actor, poet, and astronaut. Heart kicked out of chest while having explosive diarrhea in rest stop bathroom after eating a whole bag of licorice.

Jet Li 82 (Vakama Law) - From beloved Bionicle dimension. Evil Yu Law barely overcame love of Bionicles to kick Vakama so hard he shattered his Toa stone. The only time evil Yu Law showed any remorse for one of his murders and tears streamed down his face as he watched Metru Nui fall to the Morbuzakh.

Jet Li 84 (Newton Law) - Coffee spiked with toxin infected him with fatal case of Restless Leg Syndrome. Shifted and agitated self to death.

Jet Li 90 (Sterling Law) - From topsy-turvy racist stereotypes dimension in which black people are the dominant race of the United States and white people are the long-oppressed minority. Asians largely unaffected although penises are huge. Sterling Law was part of a government branch dedicated to stealing televisions. Chicken wing kicked through face by evil Yu Law while getting blazed and crazy at seedy predominantly-white Dungeons & Dragon club in Harlem.

Jet Li 91 (Hubert Law) - Known as "The Virgin Law" among the Laws that knew about alternate dimensions. Killed instantly when Yu Law showed him an 8"x10" photograph of a baby's head crowning during childbirth.

Jet Li 94 (Chauncy Law) - World's richest man in alternate dimension. Badly injured himself while trying to lift all boats, murdered in hospital while opening get-well presents. Face taken off by flying monocle at the sight of previously unknown Bionicle 4 DVD.

Jet Li 95 (Data Lore) - Android from robotic dimension. Given emotion chip by positronic brain specialist and then shown the present-day survivors scene from Schindler's List by evil Yu Law. Emotion chip jerked around so hard it exploded and destroyed him instantly.

Jet Li 96 (Art Law) - Ufologist and awakened believer in the healing power of crystals. Never believed crystals could be kicked through his face.

Jet Li 100 (Bjorn Laarksson) - From Viking dimension. Placed in a series of humiliating situations with overbearing nag of a wife and then smashed between two long ships.

Jet Li 101 (Turbo Yu Law) - From dimension just like ours except supercharged and taken to the max. Kicked by evil Yu Law from the top of a train derailing off a mountain and jumping a series of predatory animals. Impaled on burning, spike covered motocross bikes. Sponsored by evil Mountain Dew.

Jet Li 103 (Jesus H. Law) - Humble cobbler, accused of witchcraft by evil Yu Law. Sentenced by a superstitious court to be kicked at the stake, carried out by evil Yu Law.

Jet Li 104 (Yu Turtledove) - From dimension where the South won the Civil War with the help of time traveling alien dragons that gave them AK-47s. Killed by repeated kicks to the chest delivered in the midst of really awkward intercourse.

Jet Li 105 (Schrödinger's Yu Law) - Trapped in box along with a cyanide capsule that has a 50/50 chance of either releasing or not-releasing. Presumed dead but pan-dimensional cops are afraid to open the box.

Jet Li 106 (Everybody's Favorite Law) - Hated village pariah, shackled to a mule's anus so that he might eat its feces at all times of the day and night. Children threw rocks and cheered when the mule trampled on him. Considered evil Yu Law's deadly kick a mercy.

Jet Li 107 (Burt Law) - Masonic architect responsible for designing Washington, D.C. as a cosmic altar to the ancient gods of the Illuminati. Killed with a compass to the eye before DVD players were even invented, denying him the joy of Bionicles before death.

Jet Li 110 (Anson Yewley) - Powerful sorcerer of the Order of the Golden Dragon. Was once capable of transmuting water to slightly saltier water, worked in pet store's aquarium department. Currently works in grave thanks to help from skull-exploding kick.

Jet Li 111 (Who Law) - That guy in the break room who always ate more than his share of whatever people had brought in for the whole office. Was often seen with the last donut sticking out of his mouth while fishing for change at the pop machine. Last seen with an entire silverware drawer stabbed through his chest. Not all of the knives and forks, the actual drawer.

Jet Li 113 (Gordon Liuaw) - The ice fishing camp put up signs about thin ice, but did not adequately warn Gordon Liuaw that a mysterious trans-dimensional version of himself would appear and break him in half like a dry stick.

Jet Li 115 (Jurn Bjarnful-Law) - Was not wearing a clean pair of underwear when evil Yu Law threw a javelin through a concrete wall and into his chest. Well, he might have been, but they weren't clean after he died and no one was right there in his underwear to check. They would have to be really small to fit in there.

Jet Li 117 (Volcano Tuxedo) - Realized his power was growing early in evil Yu Law's murder spree and used it to do the only rational thing: break world records in every sport and event to raise money, then use the money to build a Bionicle. Evil Yu Law felt nothing but contempt as he dispatched Volcano Tuxedo and his crude mockery of the Bionicle form.

Jet Li 118 (Bowser Lao) - Evil Yu Law leapt from a great height onto his head and smashed his brains across the tilting platform suspended over magma. No inquiries were made as to the location of the princess.

You never know what might be lurking in your attic crawlspace. Is it an evil Yu Law or something else? Jet Li 119 (Rip Van Law) - The greatest warrior in the entire dimension, trained in more than a thousand martial arts and with the heightened strength of a Godzilla or at least a Rodan. Shot in the face while sleeping.

Jet Li 120 (Hootie "Cheeseburger" Law) - Narrowly defeated evil Yu Law in a grueling three-hour snap battle. There were dozens the likes of which even God had not seen before. At the end of the day all who witnessed could agree that evil Yu Law's mama so dumb she catch a fish and try to wear it home and Hootie Law's face so kicked in he walk into a Timberland store and end up a snowshoe.

Jet Li 121 (Raen Law) - Dropped out of college to focus on his furry artwork, self-diagnosed with aspergers and had a girlfriend who identified herself as an otherkin dragon in contact with ancient spirits of another dimension. Was able to complete a final update to his MySpace as he was being kicked repeatedly in the face by evil Yu Law. This posting was what put trans-dimensional cops on the trail of the evil Yu Law's killings.

In the end, all of this murder and mayhem was useless. The evil Yu Law was transported to the Stygian dimension, which is pretty much like a Mortal Kombat dimension. There he gets to fight an endless stream of dudes while really sweet and sinister buildings loom in the background. Gabriel, the good-cop version of Jet Li, was dropped into a pleasant dimension where he encountered a doppelganger of the woman of his dreams working in a veterinary office. Love surely bloomed.

I hope you enjoyed this first installment of Too Much Information. In the future I will be covering a variety of topics, from movies, to games, to history, all with the same attention to detail.