From dust we come and to dust we return, some of us sooner than others. For those with an express ticket courtesy of the government, there is (almost) always a notable last meal and a few last words.

Those of you from countries where the death penalty has been abolished might be confused. Just try to remember that here in the United States we still follow the Way of the immortal Necromonger. We keep what we kill.

It is your right as a foreign heathen to frown upon the practice of state-sanctioned execution from the comfort of your communist utopia. I can almost understand it, what with your kangaroo courts and lack of a US Constitution, but here in the United States we continue to hold executions because we only execute those who are 100% guilty. Mistakes are not made in our criminal justice system.

Rich "Lowtax" Kyanka has joined forces with Mystery Science Theater 3000's Mike Nelson for the latest installment of Mike's Rifftrax. The Rifftrax concept is to create an easily-downloaded MST3K-style audio track for the movies you love to hate. This time around the movie is "Troll 2" and Mike and Rich "Nilbog" Kyanka have teamed up to bring us the greatest thing that ever sucked. 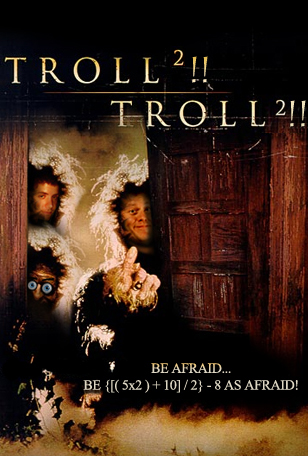 "Be afraid...be twice as afraid!" So goes the tagline for Troll 2, the follow up, unsurprisingly, to Troll. A more fitting tagline might have been, "What the hell was that? Seriously, what was that? Was the director spraying Pam cooking spray into a paper bag and huffing the fumes throughout the production? Was the script assembled by a madman using words clipped from Lyndon LaRouche pamphlets? Did the actors regularly ingest a cocktail of lithium and horse tranquilizers before each scene? And Eliot – someone please explain Eliot to me, using visual aids, if you will, because I cannot even begin to grasp the barest outlines of a concept of just what the hell Eliot is or was? Or does he just exist in some shadowy, nightmare dream world of my own creation? WHO IS ELIOT? WHY IS ELIOT?! WHERE AM I?!"

Yeah, that should have been the tagline, but it's a touch long. As it is, Rich Kyanka, the founder and proprietor of Somethingawful.com (and a huge "fan" of Troll 2) joins Mike for a hilarious RiffTrax.

Go to the Rifftrax site, buy the very reasonably-priced Rifftrax audio download and rent or buy a copy of "Troll 2". Play the audio with the video and enjoy one of the worst movies ever made!