Prepare to Be Thrilled By Kevin Spacey's Face Like Never Before

The new Advanced Warfare engine has been optimized for shooting a machine gun out the back of a future truck while it is careening around a city street. The engine being used can just as easily render a face and a robot jump and also falling through a collapsing wall. It is the best engine ever at rendering drones flying around allowing up to 500 drones on screen at once, smashing the 200 drone limit set by the Black Ops 2 engine. 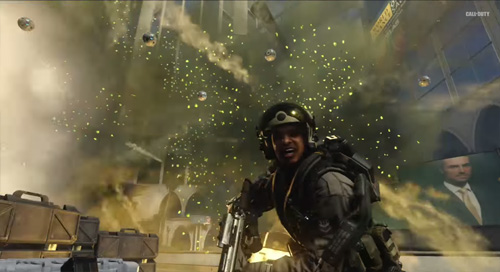 "Lots of walls are going to bust open," laughed Rauggers. "Lots of buildings are going to fall and you are going to be in them. It's part of the cinematic storytelling we want to offer. We looked at what people want in action movies - more falling and fighting inside buildings and crashing trucks - and then we dialed it up by placing Kevin Spacey's face into the game."

According to Rauggers, Call of Duty Advanced Warfare will also feature unprecedented interactivity with Kevin Spacey. 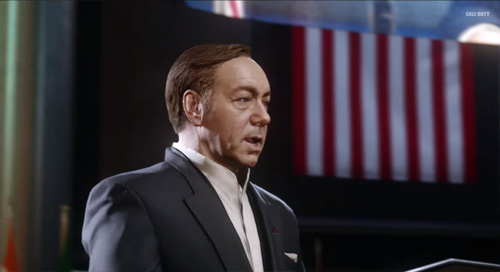 "You get to climb down from a helicopter with him. You'll be able to follow him through doors. He'll wait for you to catch up. If you take too long, he'll say something like 'Hey, time is money.' Have you ever wanted to shoot Kevin Spacey? Well, you can't until the specific quick time event at the very end and he grabs the gun from you and shoots you instead. But you will get the chance to either be shot by Kevin Spacey or try to shoot him and then be shot by him." Rauggers leaned back in his chair and added, "That's right. Kevin Spacey's face in a sequel. It's going to be even more intense."