The Truth About Cats and Dogs

TRUTH: The most widely accepted and embraced currency in the dog culture is poop. 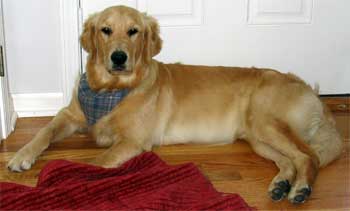 I used to believe that the entire dog economy revolved around food, as it seemed to be the most important thing in their lives, narrowly outranking "running around in circles for no apparent reason" and "randomly stopping to puke up yellow sticky water." When a dog wakes up, it wants food. When a dog first sees you, it's hoping you're bringing food. When you're feeding a dog, it's praying for your arms to suddenly fall off and hit the floor, where it will immediately scoop them up into their mouth and scurry off for an exciting after-dinner snack.

The only reason canines even tolerate the human race is because they all know we're giant walking bags of delicious meat which will, some day in the not-so-distant future, be acceptable to eat. They have been biding their time, secretly slipping in their pro-dog agenda into Congress and softening up the public to the sight of canine storm troopers marching across America, collecting terrified screaming human beings in their Soylent Green-esque meat recycling vehicles. The fat ones will be the first to go, so think about that next time somebody asks you to eat at the Cheesecake Factory with them.

However, there is a more powerful motivational factor than food in a dog's life, and that is the raw power of poop. Dogs not only love eating this wondrous substance, but they love smelling it, rolling around in it, and decorating themselves with it like some kind of revolting anti-beauty contest. If you have a moment and there's nobody you respect around, think about dog poop for a second: whenever two dogs meet each other for the first time, their attention is immediately drawn to each other's butts.

A dog's butt is like their business card; it explains who they are, where they're from, and what they had for dinner last night. If dogs ever figure out a way to use the Internet, I am 100% certain that the first thing they'll ever code is an ActiveX plugin which allows poop to be easily shared like a peer-to-peer client. Poop isn't merely a body function for dogs, it's an entire form of unique identity like a human being's DNA or fingerprint. Except, well, your DNA usually doesn't have strands of corn and gravel embedded in it, unless you're some sort of really weird superhero or something.

Every dog loves poop and instantly rockets toward it like a heat-seeking missile when it's within their enhanced computer sensory range. The police and other armed forces spend years and thousands of dollars training dogs to sniff out and locate drugs, bombs, and drug-shaped bombs, but every single dog in existence is born with the natural ability to locate each piece of dog poop ever created on Earth. If criminals ever get the not-so-bright idea of transporting drugs inside dog poop, the Columbian cartel will crumble within nanoseconds. Our dogs Polly and Speedy actually dig holes in the dirt to locate the poop they inadvertently buried with nearby dirt months ago, throwing out a shower of mud onto new piles of poop and ensuring they'll have yet another buried treasure to discover a few months afterwards. It's truly a neverending circle of excitement in the world of dog poop!

Dogs envision a glorious future where their poop is publicly bought and sold in marketplaces, where stock in poop futures are publicly traded, and where celebrities are made not by their good looks and skills, but by their intestinal fortitude (literally). A place where all dogs of race, breed, and color can get together and stick their noses up each other's butts in perfect harmony. In this uneasy age of terrorism, hatred, and growing segregation, perhaps a poop-based economy is just what this world needs. Gone would be welfare, as each and every human being can generate their own poop with just a little concentration and perhaps even more chili. We could say goodbye to dividing factors such as race and religion, as our love for poop would unify each and every man, woman, and child. And as for solving world hunger, well, I'd rather not go into that right now, but let's just say it would be sufficiently addressed. 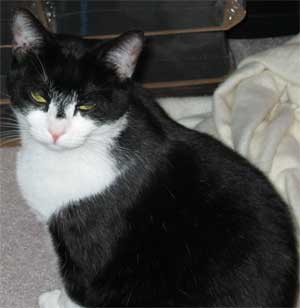 This is Cat. He does not care for you. Your life matters nothing to him.

Our two cats, "Cat" and "Kit," are essentially just blobs of light which shoot out from beneath the bed and streak underneath the couch at random intervals throughout the day. Sure, one's a much more fat and slow blob of light who randomly runs into walls, but last time I checked, the simple laws of physics had no restrictions regarding the obesity of light. I always viewed cats as a complex version of living furniture, one whose sole purpose in life was to get through their lives without ever gaining any type of purpose. Unlike dogs, cats don't really care about pleasing their masters. Cats don't really care about eating food nonstop. Cats are nihilists, Donny; they don't believe in anything. Cats are the Generation X of animals, a breed of creatures so obtuse and indifferent to the world around them that if the Earth suddenly exploded into a million red-hot flaming chunks of rock, their only concern would be to locate a rock with enough shelves to hide beneath.

I have grown to realize that our cats consider me in the exact same light: to them, I am nothing but a larger, more complex version of living furniture. Unfortunately, I am also broken furniture, as I never feed them when they want to be fed, let them out when their neurons start going nutty and demanding they run around the lawn like maniacs for 19 seconds, or let them hibernate on my lap for the next seven years. Sure they do their best to "repair" me by engaging in the time-honored tradition of sitting by my chair and staring up at me without ever blinking, until I run out of large objects to throw at them and eventually give up to feed them.

If I were to suddenly suffer a fatal heart attack and keel over dead, I seriously doubt either Kit or Cat would notice. They'd simply walk over to my lifeless corpse and stare into my glassy eyes, determined to resuscitate me in a braindead, zombified form that exists just to clean their litter box and shovel food into their bowls. We mean nothing to cats and don't represent anything but furniture with self-warming laps which can magically make their poop disappear, replacing it with food mere inches away.

TRUTH: Cats and dogs may pretend to loathe each other, but they have no problem teaming up for a greater goal: to annoy human beings. 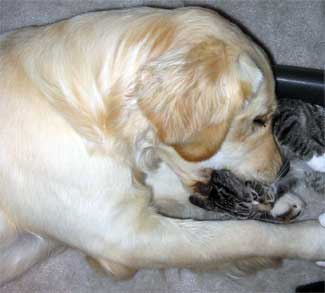 This is probably one of the main reasons why the cats do not enjoy socializing with the dogs.

The Kyanka household contains an uneasy truce between our two cats and two dogs, one full of territorial disputes and lots of spit. When the dogs are downstairs, the cats pace around upstairs, guarding their precious territory of cardboard boxes and electronics which run the risk of spontaneously combusting at any given moment due to the nine pounds of animal hair lodged inside their fans. The only time our cats work up enough confidence to successfully venture into the Wild Wild West that is our kitchen is when we let the dogs out, separating these two species of animals by a large sheet rock wall and a glass door covered in a protective coat of drool and hair. Once the dogs are let inside, the cats scramble and flee as fast as their little legs can allow them. In the rare chance the cats cannot escape or realize their inability to travel through solid objects, the following events occur:

1) Polly (the female dog) greets them by furiously wagging her tail back and forth fast enough to create vortexes of dog hair which resemble mini-Tasmanian Devils.
2) The cat in question pretends to be dead, under the assumption that dogs have no interest in dead creatures. Oh foolish cat, don't you know that dogs especially love dead things, particularly when they're emitting a stench powerful enough to shatter windows?
3) Polly responds by getting even more excited, because hey, maybe the cat's dead and she can rub every rancid molecule of death stink all over her face! What a great day this is turning out to be! She begins using her nose to push the cat's limp body around the floor, essentially using it to pick up all the hair and dust embedded in the floor.
4) The cat continues to remain motionless, believing that if they continue to ignore the nightmare, they will soon wake up to a magical, happy, dog-free room of joy.
5) This somehow excites Polly further beyond her previous levels of Earth-shattering excitement, and the furious wagging of her tail knocks down walls and uproots trees miles away. She begins slobbering all over the cat and attempting to swallow its entire head in her mouth. Speedy kind of sits by and occasionally swings his tail back and forth while carefully monitoring his sister, as if to say, "I'm sorry, I really can't get as excited as you about this whole thing but, boy, I really wish I could!"
6) The cat quickly gives up and realizes the whole "playing dead" plan just isn't going to work the way they envisioned it. Once the opportunity presents itself, such as during the nanosecond Polly stops to retract and swallow the seven-foot long streamer of drool hanging out the corner of her mouth, the cat leaps to its feet and runs in some random direction that isn't directly towards Polly's mouth. It eventually escapes (the cat, not the drool) and decides to "play it safe" for the next few months, never venturing out from the closet unless the immediate threat of atomic warfare has convinced it to stock up on food as soon as possible.
7) Polly stares off into the distance at the last known location of the cat for a good couple years, convinced that if she continues to stare, eventually the cat will magically reappear and the parade of fun can continue once again.

Despite this clear disagreement between the two feuding animal races, they occasionally team up to accomplish goals which can best be described as "annoying the people who feed them, take care of them, and make sure they aren't killing themselves nonstop." When Kit suspects he's alone, he'll jump up onto the kitchen counter and knock stuff onto the floor so the dogs, who feature much larger and powerful teeth, can mangle it to a much more professional degree than he could ever hope. We don't even bother purchasing cat toys anymore because Kit will simply kick them down the stairs and into the eagerly awaiting black holes with teeth and tails. So despite the fact that each of these animals would willingly maul the other to death either out of pure malice or due to the fact that they routinely mistake them for a small bag of beef, sometimes they work together for the greater good: to annoy their owners.

Stay tuned for more exciting truths about cats and dogs, such as the shocking reality behind hairball consumption and what really goes on in the litter box! Oh boy! I can't wait!