An artist's recreation of the fateful accident, painstakingly crafted with nothing but a "camera" paintbrush of some sort.Howdy folks, Dennis "Corin Tucker's Stalker" Farrell here. My first update as a full-fledged front page writer is bittersweet, for I must be the bearer of bad news. Reid "Frolixo" Pascibbowitz passed away this Thursday, losing control of his twin-engine Cessna while attempting to change lanes on Interstate 95. While Frolixo was a much-loved member of the Something Awful team who made us all laugh up until the end, I must admit that I honestly can't remember a single thing about him. I always assumed he was just another fictional character that Greasnin had created to spice things up around here, like that "Lowtax" character, or myself.

Upon further research, I found out that Frolixo was an all around good guy, no matter how many elderly women mysteriously went missing in his neighborhood. He had a life that was full of things, and saw a great many of these things. He probably saw several more than once, and even touched a few of them. There are a number of things he did, though no exact figure can be pinpointed. I can safely assume that he had a secret crush on me, because there is no evidence to suggest otherwise. While that unrequited love understandably devestated the poor guy, he was able to find enough inner strength to press on and drink himself into oblivion. The rumor that Frolixo's drinking "problem" lead to his death was sadly confirmed when the contents of his stomach revealed a deadly mixture of NyQuil, Lee Press-On Nails, and an oversized foam cowboy hat. Upon further analysis, the hat was found to be humorous in nature, with trace amounts of wackiness.

While I could literally go on and on about Frolixo for at least another sentence, I feel the best way to pay tribute to his life is to forget about the bastard and talk about me instead. It's what he would have wanted, and if Frolixo's skull was still intact, he'd nod in agreement right now. Then again he's dead, so I guess he couldn't really nod at all, no matter how much he wanted to. Okay, if his head were intact and someone dug his body up, I'm sure they'd nod his head in agreement.

I began my stint at Something Awful last year writing for State Og, where I soon became that section's editor / representative. While my position at State Og was satisfying, I yearned for more, much like a child after receiving a spanking from his father. Soon I was given an additional position as Johnny Cash's road manager, which is really strange when you think about it. I mean, I don't even like rap music! After I was fired from that position for no apparent reason last month, I set my sights higher. I wanted to be a front page writer, a goal that not even Einstein had been able to achieve. I knew that I had plenty to offer literaturatarily, given my numerous accomplishents in the field. Take this poem for example, which earned me 1st place in the Florida State Fair Poetry and Pie Eating Contest:

robots
with lasers and swords
that join to form a larger robot
wait
I thought I was making that up
but it's just Voltron
still, I'd fuck a robot if I had the chance
oh, like you wouldn't

In addition to my astounding literary feats, I knew I would need something to set me apart from the sea of other three-armed writers that had applied for this position. What I needed was a specialty. Zack is a WW2 (the WWW of the 1940's) buff, Livestock is a master of lambada: the forbidden dance, and Greasnin has an incredible trick in which he stands on his head and shoots ping pong balls like twenty feet in the air. While I'm famous in my hometown for my uncanny ability to navigate around my living room in the dark (except the coffee table), I sensed this wouldn't be quite enough. What could I bring to the table?

I love video games, but aside from the Jews, who doesn't? Perhaps I could write about comics, since I make my own and have a great respect for the field. Nah, writing about something you respect on this site is a lot like making a metaphor that really has nothing to do with what you're talking about. I soon realized that I had absolutely nothing to offer Something Awful. Like Jesse Jackson on the hunt for donations, I knew that I would have to resort to blackmail. That night Lowtax received an e-mail from me containing a set of photographs that he would do anything in order to keep out of the newspapers. Despite all logic that would suggest otherwise, I will now publish them here for millions of people to see. 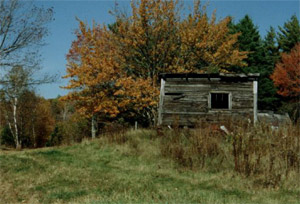 That's not all! In fact, the horrors only become worse as our journey into Hell progresses.

As if those weren't enough, I ended the e-mail with this particularly incriminating snaphsot. 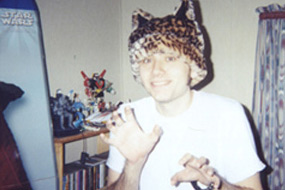 While that's technically a picture of me, my message was nonetheless made chillingly clear. Lowtax replied immediately, agreeing to meet with me for breakfast the following morning. Showing up in his infamous purple suspenders and chomping a cigar, Mr. Kyanka marked his entrance by sucker-punching our waitress in the stomach. The meeting went surprisingly well after that point, despite the fact that Lowtax didn't seem to understand english. When I finally worked up the courage to ask if I had the job, he glared at me with bloodshot eyes and bellowed, "Hmmph! Yah, boombox!" before jabbing his spoon into my forehead while laughing the deep laugh of a man who knows death intimately, or who has just seen Gallagher smash a watermelon. Finally, my lifelong dream of becoming "that guy who isn't as funny as Frolixo" had come true.

In the coming weeks, you and I will embark on an adventure together. There will be ups, downs, and clumsy drunken intercourse, as in every normal friendship. You might even learn a thing or two about yourself, and how to cauterize a spurting wound. That's all for this week, but be sure to stop by for my next update. While I can't promise that I'll be the greatest writer on Something Awful's front page, I can guarantee it.

Allow me to step into my role as State Og Representative for a few moments. Sometimes I wonder what life would be like without State Og, and what George Lucas wears to bed. Mostly I think it's the obvious (flannel pajamas), but sometimes I figure maybe he's a leopard-print thong kind of guy. Right now you're probably wondering when I'll get to this week's excerpt:

Go check out State Og, or I'll be forced to make wholly meaningless and empty threats toward you. I mean it!