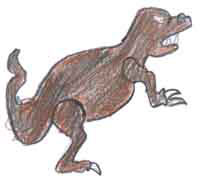 DINOSAUR!I think it can be said that an interest in dinosaurs is universal to all humans, with the possible exception of those few foolish mortals who still don't believe dinosaurs ever existed. I'm not sure what those people are thinking, but for some reason I can't help but believe they are the very same barbarous Huns who brazenly walk into supermarket express checkout aisles with more than the maximum number of items. Dinosaurs most certainly existed, and though they are no longer with us, their bones and prized excrement tell us wonders about them and the world they would have once called home if only they were capable of speaking English. We know from digging holes in the ground that countless types of dinosaurs once lived on this Earth, and we've barely even scratched the surface with our various popular digging instruments. One need only look in the brightly lit up eyes of a scientist as he gazes upon a mound of prehistoric shit with childlike wonder to know just how real and amazing a place our world once was. 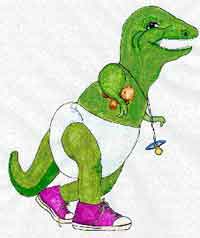 DINOSAUR!I myself recently dug up some bones in my backyard – bones that obviously belong to rare and previously undiscovered breeds of dinosaurs. A smart man, or even a retarded man capable only of shouting "Batman" or "monkey" at random intervals, would probably say my judgment on this matter is as false as an Abe Vigoda pregnancy test, but I stand by my claim that these are real dinosaur bones. Besides, what reason would anyone have to give Abe Vigoda a pregnancy test? He certainly doesn't seem very sexually active to me, not that I think about that sort of thing a lot. Okay, so I do, now shut up and leave me alone. Anyway, these bones most certainly aren't the KFC chicken bones I buried, either. With the skeletal infrastructure of these ancient beasts delicately removed, I put on my best thinking cap and pieced together the fragile strands of evidence to create an intricate knowledge of these dinosaurs and how they lived their lives. I also went to the trouble of naming them, just one of the many elective services I graciously provide the scientific community for a small commission.

The Xtremeasaurus
Habitat: Rugged and rocky areas, particularly around high peaks and cliffs.
Diet: High energy snacks, fruits, and sports drinks.
Description: From the few foot bones I have found, it can be ascertained that the Xtremeasaurus obviously relied on wheeled transportation, such as a skateboard or roller blades, to move through its rocky habitat. While I cannot be certain, it is likely an alternate cold weather evolution included advanced snowboarding skills. The Xtremeasaurus, due to highly sensitive eyes, also wore sunglasses at all times. This ocular sensitivity and need for protective eyewear extended even into the night, adding an allure of danger and daring to the obviously edgy beast's mystique. It is most likely that the Xtremeasaurus also routinely defied authority, choosing to live a life of risks in a hurricane of whim. This is not to say that the Xtremeasaurus was a socially abrasive creature, just one with a rocky and unpaved heart that roamed without restraint. Even though the Xtremeasaurus took it to the limit 24/7, it most likely held a soft spot in its heart for that one special lady dinosaur out there.

Radadactyl
Habitat: THE SKY!
Diet: G-forces.
Description: This winged wonder, champion of the sky so bright, is capable of traveling at light speed thanks in part to an organic rocket propulsion system. While I have found no evidence of this naturally occurring set of rockets, I know for a fact it's true because that would be totally awesome. Because I found a rock buried near the bones, it's plausible that this dinosaur was made out of rocks or ate rocks or gave birth to rocks. The latter would help explain why these winged wonders are extinct, since birthing rocks isn't going to do much good for anyone, especially rocket powered birds. I hypothesize that the Radadactyl was capable of shooting lasers from its eyes, enabling it to better dominate the skies and stalk prey from high above. The Radadactyl was also most likely an outspoken proponent of Linux and the open source architecture.

Patriotaurus
Habitat: Anywhere!
Diet: Omnivore
Description: The most inspiring of all dinosaurs, the Patriotaurus has a natural red, white, and blue camouflage skin color. While this bright and festive camouflage would stand in stark contrast to any setting except for a political convention or patriotic parade, it did force the Patriotaurus to take on a more aggressive and confrontational stance. The mighty beast would stand up to any challenge, even when there really wasn't a challenge. It also likely had twin machine guns for arms and probably wore a top hat. While some believe that the Tyrannosaurus rex was the undisputed champion of the dinosaur kingdom, it likely would not have been able to contend with the piercing storm of hell pouring out of this dinosaurs massive arm guns. The mighty roar of the Tyrannosaurus would have a hard time surviving under the typewriter cackling of the guns, as would all sounds of peace.

DINOSAUR!Description: The terrifying Ghoulceratops is the ghostly king of the dinosaur netherworld. Appearing as a haunting apparition around dinosaur graveyards, caves, barnyards, and other places of an ominous atmosphere, this Jurassic specter struck fear into the heart of all beasts, both gentle and fierce. It could walk through walls yet somehow still clung to the ground because, well, fuck, all ghosts do. It subsisted on a diet of ghost plants and possibly pizza, though that is pure speculation. The Ghoulceratops likely came to be after being murdered by another dinosaur. Its lust for revenge fueled an ethereal connection with the physical plane, binding it to living world by way of a single thread of concentrated hate. Unfortunately, because the Ghoulceratops was herbivore, revenge was never an option. I'll be honest, I didn't actually find any bones for this dinosaur, but that's all part of the mystery. If a dinosaur was a ghost, then it won't have any bones to find. Though the spirit of the Ghoulceratops is extinct with all other dinosaurs, some say that if you down a whole bottle of sleeping pills and watch "Jurassic Park" on a projector aimed at a ceiling, you can see it just as it once was so very long ago.

My initial success in the field of amateur archeology has done a great deal for my ego, not to mention the world. Tomorrow, I plan to invest in a shovel and dig up some more rare and previously undiscovered dinosaur bones. I think I've discovered a great new hobby, and I encourage all of you to go out and dig up rare and previously undiscovered dinosaurs yourselves. Be sure to call local universities and papers to brag about your achievements, too. It's good work if you can get it!

Hey folks, Taylor "Game Guy" Bell here with a brand new Truthmedia review. For those of you unfamiliar with Truth Media, take a look at this page to educate yourself about Truth Media's noble mission.

The other component of Steam is the server browser, which is a convenient way to locate and join servers for today’s hottest games. You can sort servers by name or by ping, which allows you to locate a fast server rather than join any server with an open slot and end up being called a “lagger.” I even used this server browser to play games I had never tried before, such as Ricochet, a deep and surprisingly addictive disc-launching mod that takes its cue from Tron. The only drawback I discovered was that the server browser only works for Half Life servers and not for newer and more popular games like Unreal Tournament 2003 and Battlefield 1942, but if Half Life is still your thing this browser should be all you need.

I held off on making a lot of grevious factual errors in favor of simply using a horrible writing style and acting completely clueless, which was surprisingly easy for me to do. Oh yeah, and the review praises Steam, so all the 13-year-olds who email death threats to Valve screaming at them for "ruining Half Life" will surely appreciate it. Be sure to pass out this link to anyone you think might take offense at the idea that Steam is good or at least less terrible and destructive than an atomic bomb.