The Official ELEAWTA Newsletter for September, 2003

Hello once again, loyal members of ELEAWTA! It is with great pride, great joy, and a little bit of gas that I address you now in this, our organization's official newsletter. Our group has continued to make great strides in achieving our goal of beating the world's most fearsome and endangered creatures in battle, then eating them and documenting their unique tastes before they disappear from this planet altogether. It's a fragile ecosystem we inhabit, and as environmentalists, we have to maintain a sense of realism. There is little that can be done in the short term to help the environment. Legislation takes years to pass and even longer to go into effect. But we of ELEAWTA know that while we may not be able to save many of the endangered species of today, we can at least commit the best ways of preparing their battered carcasses for general consumption to the ages.

I've got some very exciting news for you this month! However, before we can get into that, I think we need to take some time to discuss a continuing problem. I've addressed this before, and it pains me to do so again, but this has to stop. People, have I made our mission statement too difficult to understand? Have I left some big gray area somewhere that I keep missing? What's the problem, here? When you join ELEAWTA, it does not give you a license to go around killing indiscriminately! Well, let me rephrase that. It does not give you a license to go around killing animals indiscriminately. Whether or not your official ELEAWTA membership card grants you the right to hunt humans can vary from legislative district to district. If you are going on vacation, be sure to check into the local laws before committing any more than the absolute minimal number of murders necessary for you to enjoy your stay. But to return to my point, the animals that interest this organization are those that are both dangerous and endangered. Note how I used the word "and." I even put it in italics, there. I'm really playing up this "and" angle, because it seems like a number of you have yet to grasp its intricacies. Allow me to spell it out for you. If you're thinking about challenging an animal to the time-honored tradition of combat, ask yourself two questions:

1. Could this animal ever be thought of as "cute," "cuddly," or "a great household pet for the kids?"
2. Are there are lot of this animal around? 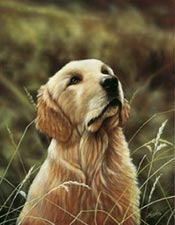 Leave these alone! They don't fit the criteria! Plus, they taste just like lamb.

If the answer to either of these questions is "yes," then leave that animal alone! If the animal isn't dangerous, than the chances are good that somebody has already cooked and eaten that animal at some point. And if the animal is plentiful, then there's simply no rush to find out what they taste like, and doing so would appear gluttonous. Furthermore, when deciding if an animal is dangerous, please consider whether it would be dangerous to any person, or whether it is dangerous specifically to you. I say this because I'm tired of getting letters saying, "I'm allergic to dogs, so I beat my neighbor's golden retriever to death with a hammer and ate her with a nice hollandaise." That's no good. Also, you should take a moment to think about whether the animal is actually endangered or if it is just not native to your area. ELEAWTA is not an organization for lazy loungabouts. If there aren't any endangered and dangerous animals on your block and you want to be an active member, get off your duff and go find one. Take a trip to another town, another state, another country. The animal has to be in its natural habitat when you challenge it. I've been getting an earful lately from angry zookeepers who have been having card-carrying members of ELEAWTA hopping over fences and sneaking into cages to fight and eat animals under the flimsy pretense that, "Hey, this is the only tiger around for miles!"

As I said, I've gone over all of this before. I only bring it up again because things have gotten so out of hand that a serious problem has arisen. There's no easy way to say this, so I'm just going to come out with it: the animals are starting to fight back, and even worse, they're using preemptive strikes. That's right, the animal kingdom is so shaken by the wanton acts of animicular slaughter perpetrated by rogue operatives of ELEAWTA that even animals normally regarded as harmless and/or comical have begun to take the offensive. 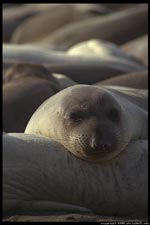 The face of terror.

A BRITISH scientist has died after being attacked by a seal while snorkelling in the Antarctic.

Marine biologist Kirsty Brown, 28, was studying the movement of icebergs when the animal struck, dragging her under the icy waters.

Colleagues who saw the incident from the shore launched a rescue boat and pulled Miss Brown on board.

Despite efforts to revive her, the experienced diver was pronounced dead an hour later. It is believed she drowned.

Although they are formidable hunters, leopard seals are solitary creatures and it is virtually unknown for them to attack humans.

Tuesday's incident is believed to be the first fatal attack by a seal since the Scott Expedition of 1912.

For ninety-one years, humans and seals existed harmoniously. They left us alone, and we, in turn, agreed to club only their young, to whom they had not yet formed a real emotional attachment. But those of you out there who think an ELEAWTA membership gives you free reign to just hunt whatever creatures you want have frightened the seal populace so greatly that you set sealo-humanic relations back to the stone age! Now we've got seals desperately trying to make the first strike, attacking any humans they see before we get the chance to come after them and their families. Just try to imagine what it must have been like for Kirsty Brown, floating in that icy water, studying the gradual shifts of icebergs, when suddenly - BAM! All you can see is that cute, furry little face with its big brown eyes and adorable little nose snarling at you through the mist of your own blood. Not a pretty picture, my friends. And it only gets worse! 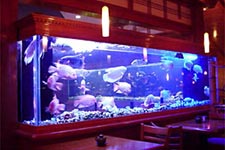 I never knew they had it in them.

TROPICAL fish are believed to have caused a fire at a Japanese house, fire brigade officials said, warning against the use of electrical plugs near fishtanks.

"It is an extremely rare case, but fish are believed to be the culprits," said an official at the Nogata fire station in Tokyo.

A fire started behind four fishtanks on August 23, destroying the walls and ceiling of the second floor of the house.

Oh, and before I forget, some of you have asked me if it's okay to try to find ways to kill airborne microbes and viruses and then eat them. My answer to this is no, simply because it takes an awful lot of a virus to produce a substance large enough to even have a flavor, and if you've got that much of it, it's probably not endangered. I'm serious about this. No bacteria, no microbes, no viruses. I most definitely do not want any of them deciding we have to be eliminated. 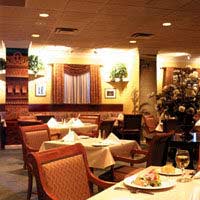 Ours will have a nice, classy atmosphere like this. It will go well with the splatter.

Okay, enough of that. I promised exciting news, so here it is! Since this group's founding a year ago today, we have grown by leaps and bounds. Our members have devised an amazing number of viable ways to defeat many of nature's most fearsome and endangered animals, and it turns out that many of the animals are quite delicious. We now have enough knowledge to realize a dream. As a way of celebrating our successes thus far, as well as a way to raise funds and publicity for our group, I am thrilled to announce the opening of our very own ELEAWTA-themed restaurant! It will be called The Last Lion, and our motto will be, "We Beat 'Em, You Eat 'Em."

This premiere dining facility will be dedicated to the idea of sharing all of our successes with people who may have not heard of the organization, or who have heard of it, but are not yet sure if they want to join. The menu will consist of nothing but endangered animals. When you place an order, our specially trained staff will beat the specified animal to death right before your very eyes using techniques documented by successful ELEAWTA expeditions. In the unlikely, but still very possible event that the staff member is actually killed and eaten by the animal, another person on the staff will be sent in to finish off the creature, and so on until either the animal is subdued or it dies from overeating. Now, some might see having that much of our staff eaten by wild animals as a sign that ELEAWTA's techniques are not quite up to snuff. In order to avert that publicity nightmare, we will have to play up the angle that while we may have lost a large number of staff members, at least the animal will already be stuffed with a second, possibly even more delicious meat! That's like two meals for the price of one!

Due to the nature of the dishes served, the menu will be of a somewhat limited scope. There will only be a handful of dishes offered at a time, and the menu will change on a bi-monthly basis. Even so, since we will be serving only endangered animals, The Last Lion will sadly only be open for a year or two, tops. Nonetheless, I expect that this will be more than enough time to turn a sizable profit and to generate a substantial amount of publicity for us. Really, I don't see any way that this plan could fail, at least from a business perspective.

That's all for now, gang. Sorry to be so negative for so much of this month's newsletter, but when you upset the natural order of life on this planet as it has been for millennia... well, that's just something you have to take the time to address. I hope to see you all around The Last Lion, and until next time, keep showing those uppity ocelots who's boss!

This Just In! The Weekend Web!

Hello! Zachary "Spokker Jones" Gutierrez here to introduce an exciting new feature here at Something Awful. What's that? Why, it's The Weekend Web of course! The Weekend Web? Yeah! The Weekend Web! Every Sunday we will be reporting to you the most important internet stories as they break. This week we take a look at anime forums. Have a gander at the bounty that awaits you: