All the Children are Insane 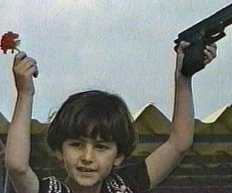 Something happened to me awhile back that really got me thinking. I was mowing the lawn in the afternoon like I do everyday, and I spied a couple of young punks cut across the corner of my lawn with their bikes. Like any God fearing, lawn-worshipping American, I yelled out, "You kids get off my lawn or I'll burn your goddamn treehouse down!" Then the strangest thing happened. They stopped their bikes, turned around to face me, and gave me the finger! Needless to say, I was shocked by such rude behavior, and caught off guard by the total lack of fear displayed by these delinquent 10 year olds. Way back when I was a kid (the 80's), we respected our elders. Sass was met with a swift belt to the buttocks, instilling a moral fiber and righteous sensibilities. I think what I witnessed on my lawn was the attitude of the new generation. Let's call them the Children of the Corn generation, or "COC" kids. It's quite obvious that something is wrong with the juveniles of America today, and frankly I'm quite alarmed. Statistics show that school shootings, drugs, obesity, and corporate pop music is on the rise, with no end in sight. How did this happen? How did we get so far? What caused the children of America to turn into obese, crackhead murderers with bad spelling?

Maybe the violent media, no parental guidance, the failure of the war on drugs, unhealthy diets, America's gun culture, the school system, classmates' teasing, and a total lack of any discipline whatsoever might be attributing to this problem, but what's the real issue here? Call me crazy, but I think it all stems from our lack of a good programs for kids to teach them the basics of manners and to instruct them on the dangers of guns and drugs. This has already been tried with programs like D.A.R.E., but they have been proven as total failures, usually resulting in drug use going up because the now curious 5th graders have been opened up to a new world of forbidden fruit, and you know if Nancy Reagan is against it, it must be cool. I believe that's because they went about it all wrong. Now, you all know I'm not one to sit around watching the world go to hell in a handbasket, so I decided to create some of my own programs, and donate a significant amount of my spare time to the cause. Helping the ailing children of America is more important than my silly hobby of creating the whole cast of Lord of the Rings out of Real Dolls anyway. 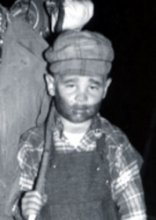 Drugs has turned this spritely young lad into a small hobo full of sorrow.

The first thing on my hit list of helping was drugs. The drug problem in this country has reached epic proportions, causing many a youth to fall into illegal lifestyles, resulting bad school grades, troubles with the law, and afterschool specials with Scott Baio. Sure, you can show the children film strips or read stories about why they shouldn't do drugs, but it doesn't seem to sink in. So I decided to create an afterschool program for troubled kids called "Kidz Don't Do Drugz". The first thing I did was to take them on a heart smart journey into the ghettos of Detroit to show them the depravity of the druggie lifestyle. We had an excellent time, or as the kids like to say, "Totally tubularastic!"

On the first leg of the journey, we visited a local crackhouse where most of the drug activity in the area takes place. There we saw toothless, ragged crackheads beating each other with splintered chicken bones over some crack dust residue that would sustain a high for 3 seconds. Once the scuffle ended and the victor scrambled down some dark hole in the floor to consume his hard won prize in privacy, we interviewed a few of them to ask them what an average day is like for them. Basically they said it was smoking crack, or trying to get some money for crack. Then one of the let out a high pitch screech and slashed a girl in our group across the face with his ragged, HIV infested nails. We made hasty retreat to the van. Unfortunately, the outing did not have the impact I was looking for, for most of the children thought taking drugs was still "radical".

I had to take drastic measures: shock tactics if you will. The kids of today are so desensitized that it might be the only way to get a point across. At the next gathering, I announced that we were going to do a science project about the dangers of heroin. I ignored the grumbles and groans while seizing the class pet, a guinea pig called Mr. Monocle, and gathered the children around. Mr. Monocle was administered a healthy shot of heroin intravenously. Right away it went into seizures, suffered a massive stroke, flipped on its back, and promptly died. The kids were horrified and cried out in anguish, visibly shaken at what they just saw. "This is what happens when you mess with the needle!", I warned. I could see that the demonstration struck a cord, but I wanted to make sure so I spiked their apple juice with LSD and made them watch Battlefield Earth. Much like the Pavlov's Dog experiment, I used association. The children had such a bad trip that they will always associate negative thoughts with drugs. Children are just like dogs. Filthy little animals. 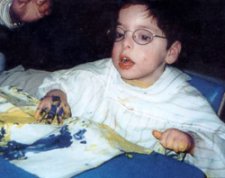 HE'S ABOUT TO BREAK!

Rampage Prevention: Kids on the Edge

One of the most concerning growing problems with kids is the number of school shootings that have taken place in the last few years. This is a new phenomenon that is tearing apart the school system. The schoolyard has become a Vietnam battlefield, unsure of who the real enemy is, or when they will strike. There is only one way to put a stop to this madness: prevention.

Kids that are different or just don't "fit in" are walking time bombs, ready to blow and send red hot shrapnel into the bellies of their fellow classmates. They make themselves targets for teasing by not putting forth an effort to be a team player, or by playing "Magic: The Gathering" cards in the library during lunch. These people need to be identified early, and separated from the normal people to be put in their own special classes, or even their own school. It's the only way to be sure. I went ahead and sent my plans to the local school district, and it's under serious consideration for implementation. Here is my list of warning signs of a child on the edge.

any independent thought or original idea

We simply can't afford to take any risks with these savage little miscreants. Metal detectors with armed security guards should be installed at all entry points. Also, random locker checks should be done to look for deadly weapons or suspicious notes, strip searches/anal cavity checks every morning, and each student should have to wear a tracking collar with the head exploding option like in the Arnold Schwarzenegger movie "The Running Man". The most important thing is to start early. A child is never too young to harbor deadly secrets, or plot diabolical schemes. Inspecting kindergarten finger paintings may help teachers stumble across a blueprint for terror, a warning sign of a brewing toddler rampage. The lives of countless innocent children may depend on it.

In order to get inside the mind of children, you need to befriend them. This program was about building a bridge of communication between adults and kids by hanging out together and having a great time. Every Sunday I would invite a bushel of young boys over to my bungalow to watch movies, go swimming in my pool, and eat ice cream. It was a great way to get in touch with the boys. My home on Sunday became a place of carefree fun, little wet boys running to and fro, glistening beads of moisture running down their soft nubile chests. In the afternoon we would play Twister, wrestle, and play full contact grab tag. I felt that I really got to know the boys on a deep, personal level. Unfortunately, this program has been suspended due to an ongoing Federal investigation. It's really hard to help the kids when I keep hitting brick walls like this.