We here at Something Awful are just as big on the automotive world as we are computers and the Internet. In fact, we have a thriving community of armchair mechanics residing on our forums, ready to help any needy inept Internet nerd that accidentally puts motor oil in the wrong hole, or eats their brake pads thinking they are delicious ice cream sandwiches. The rise of such shows as "American Hotrod", and "American Chopper" has thrust the blue-collar warriors that are custom mechanics into the limelight, becoming minor celebrities for their creations. I hear that they even have their own bobbleheads now! This is an opportunity we would be fools to miss.

We here at Something Awful want to ride the wave of success of these mechanic shows before the hype dies down and they start appearing as wacky neighbors in sitcoms. With a team of the best 8 guys from our "Automotive Insanity" forums, Lowtax filling the role as the cranky supervisor, and our mascot pig "Zhukov" cheering us on, we were ready to start our own show called "American Moped" that will air in about 15 weeks on TLC. I led the group on a project to make one of the baddest and slickest looking mopeds that had ever been fabricated. We wanted to make something special that would commemorate a tragic event like the World Trade Center, but that has been done to death and it's not trendy anymore. In fact, all the major disasters of this century already have a hotrod or motorcycle dedicated to them. We decided to go back in time and pick an event that is still dear to our hearts, but so far in the past that nobody thought of doing it yet: The Alamo.

The fabrication on this moped was going to be intense. We had 10 days to make it and then ship it down to Texas for the anniversary of the famous battle. There we would unveil it in front of a large crowd and the moped would stay in the Alamo for the rest of the year. We had a huge task in front of us to make this moped look sick as hell while at the same time paying tribute to the historical significance to the Alamo. It would take a lot of teamwork, and a lot of skill. Here's what happened: 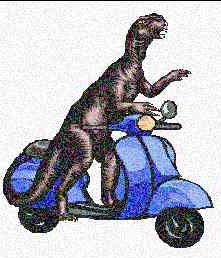 Day 1
We opened up the garage doors to air out the stench of rotting flesh. Richard "Lowtax" Kyanka said we could use his garage for this special internet project, as long as we didn't mind the random array of putrid meat hanging from giant hooks. When we asked why he had the bad meat in his garage in the first place, he looked at us very seriously and said "science."

We got to work right away, placing the steel moped chassis on our workstation for inspection and stress testing. The mental image of what we wanted this to look like after the allotted time was burned in our brains, and we decided to skip any sketches or pencil faggotry. It was going to be asses and elbows for the next couple weeks if we wanted to make the deadline. But since it was day one and we were tired and hungry from getting drunk that morning, we decided to call it a day and go to Denny's for some Moons Over My Hammy. After we left, Lowtax came out of his office wearing his Ray Ban sunglasses and Hawaiian shirt to check on our progress. Seeing that we left, he became enraged and started punching one of the hunks of meat like Rocky.

Day 2
Zhukov, our hog mascot, got into a 5lb bag of Skittles and ate the whole thing. I ended up having to take him to the vet to get his stomach pumped while the guys were ready to start another day of sparks and oil. The motor was supposed to arrive today, so it was just a waiting game until it got there sometime in the late afternoon. The guys played hacky sack and took a nap under Lowtax’s deck. The engine finally showed up, but nobody was awake to sign for it. This day really didn’t go as smoothly as we hoped and we really had to get the ball rolling on the next few days.

Day 3
Scurvy! Malnutrition and all the rats in the garage made the scurvy spread though our ranks like wildfire. I headed out to the grocery store to buy a crate of limes while the crew was laid out on infirmary cots in the garage, moaning over their painful open sores. Lowtax came out of his office and yelled at them for being behind schedule and punched Zhukov the pig as hard as he could, giving the swine a handsome bruise on his flank. Once the limes were passed out and we had the situation under control, we started to mount the engine to the chassis. This became a problem because the pulley system in Lowtax’s garage was made entirely of fishing line, and snapped under the weight of the motor. We had to do it by hand, and combine our strength to get the job done. Once mounted, we superglued the brackets and set it in front of the fan to dry. The next day was going to be crucial. 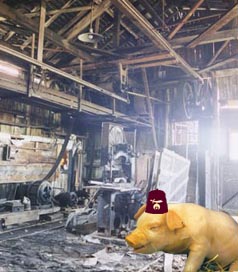 Our garage, where dreams come true. Zhukov the piglet cheers us on with his oinks and whistles.

Day 4
We decided to go to the circus.

Day 5
It was time to buckle down and get cracking on this thing. We stole a couple tires from a tricycle we found in the neighbor’s yard and taped them down on the chassis. This thing already looked pretty wicked, and I had to admit I had a good feeling about this thing. Next came making the handlebars. It took some searching, but we found some quality metal from Lowtax gutters and starting crafting a classic low rider design of bars. One of the goons badly cut his hand with some of the metal shears and rendered the hand useless. If it’s one thing I didn’t need, it was a one-handed machinist. We took him out back and tried to shoot him with our Lugers, but strangely they all jammed on us. He was lucky, and we were down a worker and behind schedule. Tensions began to rise.

Day 6
Chaos and madness rule the garage today. I found out that yesterday the marlin nut was bolted on backwards and the ball bearings were corroded from what looked like salsa. Lowtax called an emergency meeting to try to get things under control. The atmosphere was somber and tense. Lowtax started by calling us all assholes and then called us “worthless faggots”. Then he told us to get our ass back to work and get the moped done or we will be just another one of those husks of meat hanging in the garage. This gave us the motivation we were looking for, and right away we repaired the nut and salsa damage. Then the tires and engine were properly mounted with a welding tool that shot pretty sparks into the air. We learned the hard way not to try to eat the sparks because they can be very, very hot. All that was left was the gas tank, pedals, mirrors, seat, paint, and the fabrication for the Alamo theme. Things were going good. 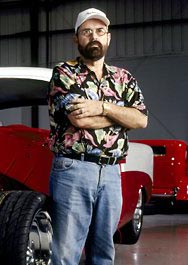 Lowtax is unhappy with the workers again. He won't return our loved ones until we finish his project. Help!

Day 7
Zhukov ate a wrench. Normally this would be hilarious, but it was the only one we had to share between us, and we had neither the time nor funds to go across town to the Wal-Mart for a new one. We just had to wait for nature to take its course and follow the pig around all day. This is the part of the job that people rarely see. It’s not all glamour and sparks, there are some days where you just have to wait for a pig to shit out your tools. The camera was here for all the drama, and although I find it a little embarrassing, its also important to tell the real story of what garage mechanics have to go though everyday. When we finally got the wrench back, there was only a few minutes left in the work day, but we were able to get a few nuts and bolts on. Lowtax told us we had to stay overnight and keep working, but our union clearly states that we don’t have to work overtime, obey the non-smoking signs, or trim our nose hairs. God bless the union.

Day 10
You know, if we didn’t have such ridiculous deadlines, we wouldn’t have even been in this mess. It was total insanity in the garage. We need to finish the moped and roll it out by 4PM if it was going to make it to Texas for the Alamo anniversary. We quickly put on all the accessories, including a basket and whistle. We painted the moped brown and black, and while it dried we ate some Arby’s for lunch. After that we started to fabricate our Alamo theme. Since we only had a few hours, we thought the best thing to do was to get some Plaster of Paris and some brown paint. We began to craft an adobe wall, like the ones at the Alamo, on the gas tank and back of the moped. Then we took a coonskin cap that was in honor of Davy Crocket, who was said to be one of the last men standing, and placed it right on the front. After a little spit and polish to make it shiny, the moped was complete. We went into Lowtax’s home office to tell him he good news, but it seemed that he died during the night and his pets were busy devouring his corpse. We made the 4:00 delivery, and all breathed a sigh of relief. It was a great feeling to finish this project and show just how much we love America through the art of machinery. Here is our finished product: 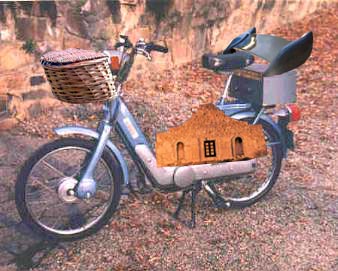 But our victory was bittersweet. Some fool tried starting the moped while it was on display and it exploded, killing 14 tourists and damaging the fort’s archway at the entrance. There are multiple lawsuits filed against us right now, but since Lowtax was the supervisor, we are pretending he’s still alive so he can take all of the blame. It’s just like Weekend at Bernie’s but it smells terrible and it’s really hard to move a corpse like a puppet with rigor mortis. Hollywood has lied to me for the last time and I won’t take it anymore. (Don’t forget to tune in to TLC in 15 weeks for the show American Moped!). Good night!