Acne Medication Made Me Shoot the Sheriff 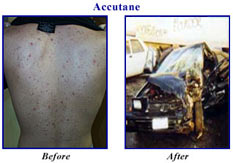 I hope you dislike acne more than you dislike fatal crashes.Something Awful has a proud tradition of covering breaking news, our staff of diligent writers and dangerous sociopaths works overtime to bring you the latest links to CNN that are a week old and then comment on them sarcastically. Speaking of which, DID YOU HEAR ABOUT THAT KID WHO JUST CRASHED INTO A BANK?! Oh my god, wet off the presses.

It seems this juvenile go-getter decided to commandeer a Cessna and execute a perfect landing into the side of the Bank of America building in Tampa. My initial reaction was that he got his inspiration to do this from listening to Credence Clearwater Revival and playing Microsoft Flight Simulator, but it turns out something far more insidious might have been behind his actions: ACNE MEDICATION. For years mankind has been plagued by people going crazy because of acne medication and crashing something into something bigger and making people die. The government doesn't want you to know this, and it's too hot for even those videos that are too hot for TV, so you might not have heard about it.

To prove my journalistic integrity I am going to explode the lid off this incredible scandal and let you all in on the truth behind Accutane. Somehow I survived puberty without ever requiring prescription acne medication, so I don't have any first hand experience, but what I've turned up will blow your socks so far off that they will fly all the way around the earth and hit you in the back and then blow off socks that you put on while they were flying around the earth.

Manufacturer: Some company related to Japanese tests conducted on American POWs during the Second World War.

Contents: Primarily isotretinoin, which is Latin for "refined physical hatred and self-loathing". Other contents may include killer bee extract, PCP, shattered dreams, the distilled facial expressions of Donald Rumsfeld, pineal gland squeezings, and x-rays taken of a beaten dog.

Warnings: May cause mild depression. It should be noted that in the dictionary "depression" - especially when linked with the word "mild" - does not mean "may cause you to crash an airplane into the side of a bank building". The FDA is examining these guidelines.

Lab Results: I've poured over several interesting lab test results from a number of internal and FDA sources and I present the two most intriguing here without editing. 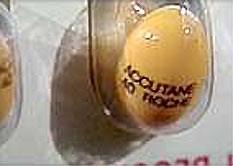 So much hate in such a little pill.Greetings honorable elders, I have grave news to report in our recent clinical test trials of isotretinoin on upper primates. Many of these cases had optimal results in the reduction of artificially induced facial acne, but a handful reacted with disturbing mental problems and violence. Subject 444-46C, a male gorilla, was exposed to triple dosages of isotretinoin over an application period of 8 days. On the eighth day 46C was placed into the behavior chamber where it brutally mauled the test dummy. It then somehow began to break through a reinforced concrete wall and escape to the top of the construction underway in the West Wing. From its perch high atop the girders it repeatedly hurled large barrels down at a maintenance man who was attempting to rescue one of my lab assistants that the test subject had assaulted.

Repeated attempts by the maintenance man met with near catastrophic failure, even after he had been outfitted with a lightweight sledge hammer. Further problems developed when the barrels reached the bottom and rolled into a vat of Accutane. The barrels were somehow animated by the drug and would emerge seemingly possessed by a malevolent sentience that pursued the maintenance man from below even as he was leaping carefully over the barrels being hurled at him.

Subject 46C was finally subdued from long range with a series of tranquilizer darts and has been destroyed. Autopsy results pending.

It is my recommendation that further plans to begin large scale production of Accutane and submit it for FDA review should be postponed or even discontinued.

FDA Post-Approval Review (dated 09-18-1999)
(This review was believed to have been written by Dr. Waldo Shepherd of the FDA, who is in charge of testing and reviewing dermatological medications).

Accutane was approved for prescription only consumption in 1997 with severe warnings about usage during pregnancy and a general warning that it might cause mild depression. It is my opinion that neither of these warnings delve deeply enough into the problems caused by Accutane. My study of reports from doctors whose patients were prescribed Accutane indicate that these side effects may effect patients much more profoundly than initially believed.

Here are several cases that I believe you might find pertinent: 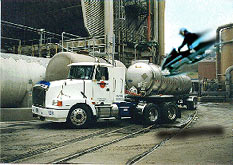 Todd Oakley started a chain reaction of terror while hopped up on Accutane.

It is my recommendation that FDA approval for Accutane be suspended immediately pending further review and more careful clinical trials.

BOOM! Did you feel that? That's what it feels like to have your world rocked. Yes ma'am, things are coming up Accutane and it ain't all fun and games, as you can see from my shadily acquired memos. For those of you out there reading this who happen to be using the drug, I strongly suggest you stop taking that rammy shit right now before you ride your Segway through a roadblock.

American Friends Links of the Day

Holy crap on a crap stick, all new Fireman Comic!

Oh those rascals, learning life's lessons one victim at a time!