Charlie Bucket and the Chocolate Factory Good afternoon.Ladies, gentlemen, Oompa Loompa's, thank you all for coming today. As many of you may know the esteemed Mr. Wonka has decided to hand sole ownership of his candy production facility over to me. Mr. Wonka believed that because I was a child I would be naïve and continue to do things around here in the whimsical and shockingly inefficient manner he has. I am here to say that things are not going to be the same at all. After speaking with Mr. Wonka's accountant I have come to discover that the factory here is rarely operating in the black. In fact, Mr. Wonka has basically saddled me with years of debt caused by some of the ridiculous expenses involved in producing our candy here.

Please allow me to give you an example.

A single Willy Wonka chocolate bar costs almost 38 dollars to produce; a figure that can be attached to much more expensive consumer goods like blenders and microwave ovens. Why does our candy cost so much? Let's take the example of our 38 dollar chocolate bar which, I might add, we sell for a nickel.

One of Mr. Wonka's most fiscally irresponsible ventures and believe me, there are many.The chocolate for the bar itself is refined from a river of free-flowing chocolate that runs for over three hundred feet through a mind-bogglingly expensive "candy greenhouse". The chocolate that composes this river has to be pumped out and the canal has to be dredged hourly to prevent clogs and to keep the chocolate sanitary. This is bad enough but then I learned that we are employing almost fifty Oompa Loompas specifically to raise chocolate apples in an orchard located underground. Underground genetically engineered candy apple trees. The grow lighting for the orchard is nearly enough to cause brownouts during summers. Not to mention we are extracting liquid chocolate from slow-growing fruit.

This staggeringly wasteful process is a prime example of the inefficiency that is at the core of every product we make here at Willy Wonka.

What do Snozzberries taste like? The snozzberries taste like lost profits. And if we continue to operate the way Willy Wonka had intended we will be closing the doors here in a matter of weeks. Instead, I would like to think there is the possibility of a bright future for our chocolate factory, but it is going to take a lot of change and a lot of hard sacrifices.

I've asked an industrial streamlining team from Kellog, Meijer, and Frank to come and take a look at our operation here and they have provided me with a detailed analysis on ways we can reform for the better. First up, Oompa Loompas…you are, uh, just dwarfs guys. You no longer have to wear those ridiculous uniforms, the green hair dye, nor the skin bronzer. I'm sure you're glad to hear that but we will also be discontinuing the offer for free housing in the "Oompa Loompa Village". Wonka's little "It's a Small World" gingerbread town is one of the biggest wastes of money here and in some places it is so crime-ridden that the shift supervisors are afraid to go looking for tardy employees. We will give you all until the end of the week to sort out your housing situation and then we will be bulldozing the "Village" to make room for the new employee parking lot. This project makes me sick to my stomach. It's like the goal was to waste as much money as possible for as little gain as could be achieved.We are also going to be eliminating some of our research projects and focusing on economizing our existing lineup of candy. The TV-transmission chocolate bar? Possibly the worst application of technology I have ever witnessed. You make a gigantic candy bar and then you transmit it through the air, shrinking it down to 1/100th of its original size in the process. You know who might find this technology useful? The microprocessor industry. That's why I've made an offer to sell the technology to Intel for nearly enough money to pull us out of debt. It's also why we will never ever ever under any circumstances try to teleport a candy bar ever again. Wonka blew almost 50 million in credit on that little research project.

I'm sure many of you are aware of another of Wonka's follies; the Everlasting Gobstopper. How smart do you think selling a candy that you can eat forever is? One piece of candy that a kid can eat for five or ten years, basically until they lose it or until it's so covered with lint and bees that they're afraid to even touch it. This is a terrible product from a profit standpoint. We will continue with plans for the Everlasting Gobstopper rollout but we will be replacing the Gobstopper itself with a more Five to Ten Minute Lasting Gobstopper. The formula for the real Gobstopper is being shopped around to various defense contractors for potential use in composite armors for tanks.

We also need to address a number of worker's compensation grievances and ignored fines from OSHA. Apparently Willy Wonka was not very interested in the safety of visitors and workers. We will begin by removing large exposed rotating fans and replacing them with a central H/V/AC system. Then we will address the following safety concerns:

The Bottomless Pit of Sugary Sweeties. Apparently two kids snuck in one night and fell into the pit, dashing themselves to pieces on the rock candy walls as they plummeted. A janitor Oompa Loompa also discovered that despite its name the pit is not bottomless as he was forced to climb down and remove their rotting corpses.

The Cotton Candy Spider Spinner. I don't know if you guys noticed but there is an extremely aggressive giant spider lurking in the cotton candy manufacturing section of the factory. The spider has exsanguinated at least three Oompa Loompas who were harvesting its web for sale. Not only that, but I doubt that feeding kids candy a spider craps out is up to health codes.

The Chocolate Canal. As mentioned previously the chocolate canal is a serious money sink here at Willy Wonka's, but much worse than that it is a death trap. I have sitting back on my desk more than a dozen reports of Oompa Loompas falling in and having to be fished out by the Candy Safety Patrol. Which begs the question: why has that madman Wonka created a candy factory so deadly that you have to organize patrols to make sure people aren't dying?

Handicapped Accessibility. Many places within the factory are barely accessible by anyone other than the most athletic Oompa Loompas. To get to the valve controls for the molasses waterfall you literally have to climb up a vertical cliff composed of gummy candy. Luckily there have not been any serious injuries in this area - possibly because the floor is made out of marshmallows - but it is just one of many examples of intolerable access conditions for critical components of our candy production.

The Golden Geese. We have no need for golden eggs and the freakishly enormous geese that Wonka has had specially bred to produce them are very aggressive and difficult to control. I question the sanity of Wonka when he makes animals gigantic and the entirety of his workforce is dwarfs. How many of you out there have lost a finger or even a hand to one of the giant geese? I thought so. I apologize sincerely on behalf of the previous management.

Public Tours. Until such a time as I feel the factory is up to code we will be discontinuing all public tours of the facility. Wonka had a tendency to feed visiting children candy that was not, and never would be, approved by the FDA. Candy that turns kids into a blueberry? What a fantastic idea, you absolute sadist! You Lose. Good Day.Finally I have to bring you all some unfortunate news. As we phase out the dangerous and appallingly wasteful production methods currently being used we will be implementing an ultramodern interlocking production line. We will be able to increase candy production by roughly 100 times over the course of our six month renovation, but the new automation will leave many of you without a job. I will be offering generous severance packages to all of the Oompa Loompas who would like to volunteer for early retirement. The others will have to wait for the inevitable paring down and streamlining of the workforce here, although they too will receive generous compensation for their hard work.

I would like to remind you that under the management of Mr. Wonka this factory had only enough borrowed assets to keep your paychecks coming for another three to four weeks. With our new automation and a fresh investment of capital we will be able to pay your severances and continue to pay our employees. As profits rise so will your salaries, in fact they will rise dramatically, as according to Mr. Wonka's accountant most of you were receiving wages that would qualify as slave labor.

The future of Willy Wonka's Chocolate Factory is by no means certain, but I believe in the workers here and I believe in the dream of producing high quality candy at an affordable price. Thank you and remember to keep dreaming.

When I was young an anagram killed my family

Hi gang, Livestock reporting for duty in what may be the last week of my adult life. I'm going to be murdered by several people at Gooncon for unforgivable acts of name-calling on the giant popularity contest we call Internet. But before I die, I promise to deliver you at least two more Phridays. I hope you like anagrams and movie posters, because otherwise I'm dying as I lived: in vain. In a sequel to the hit Phriday of 2003, "Anagrammed Movies," we have a big honking two-part, well, sequel. The Something Awful Forum Goons created something like a million posters, and I'm using at least a fraction of those, which is still a lot. Here is a preview: 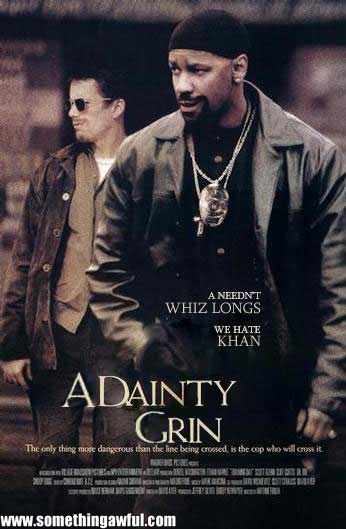 Please go read this because I have nothing else to offer you and I don't want to have to entertain you myself.