My first journey into space was a complete accident. I was thirteen at the time, playing something that vaguely resembled basketball by myself in my driveway. I had never been good at the sport and couldn't seem to get the whole "moving while bouncing the ball" thing down, yet every weekend my best friends would drag me to a nearby court for frightening pickup games against seven foot tall kids that dribbled behind their backs and through their legs every single time they got the ball in case anyone forgot they were able to do that sort of thing. The kids who guarded me would eventually realize I was perfectly capable of stopping myself from scoring, so they'd leave me alone and go double-team one of my friends. Needless to say our team rarely won and I was ashamed of being the guy that held us back, even if I did hate the game.

So there I was, practicing my layups when it happened. Maybe it was because I was trying a bit too hard or maybe it was all the adrenaline coursing through my veins, but as I planted my foot and began to leap upwards to gently lay the ball in the hoop, I immediately sensed something was wrong. I had jumped too high.

My momentum carried me through a low-laying cloud that resembled a potato that looked like Telly Sevales wearing a cloud costume, then up through the four major levels of the atmosphere at a rate of speed which showed no sign of slowing down. Knowing there was no oxygen in space, I sharply inhaled as much air as I could and held it with my cheeks puffed out. Upon entering the cold bigness of space, I reached the apex of my jump and floated for almost a full minute.

A minute may be a relatively short amount of time, but this one changed my life in a profound way. When you spend your entire life on the surface of one seemingly boundless planet and suddenly find yourself looking down on it from a distance, you come to realize certain truths that you may not have otherwise discovered. I realized, for example, that South America is like right below normal America. 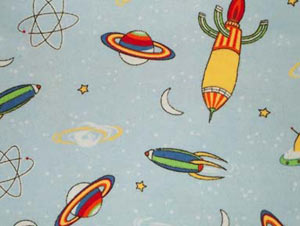 An actual photograph taken during my first trip to space.As you'd probably imagine, the roof of the Ionosphere was littered with thousands of wet leaves and scores of errant frisbees. I managed to scoop up an armful of discs when my descent began, but as the heat of re-entry intensified my souvenirs were vaporized. I recall being very scared as I plummeted toward Earth in that giant fireball because I had just spent my allowance on the Nirvana shirt I was wearing and I wasn't sure it was going to hold up. It stayed together though, and soon I landed safely on the soft grass of my lawn, a mere three feet away from the rigid surface of the sidewalk and certain death.

I immediately knew that I had to go back. The unexpected trek had opened my eyes to a whole new world, a world made of space. Before I returned, however, I knew that I had to take certain precautions in order to guarantee a safe trip.

I created a makeshift breathing apparatus by placing a plastic bag over my head and sealing it tight with duct tape. Though my cheeks had stretched a great deal to hold an impressive amount of air during my first flight, it was a scientific fact that a plastic bag had a much greater capacity to store oxygen. I also knew that I would need a weapon to defend myself from potential attackers. I hadn't come across any life forms at all in my initial outing, but I was a big fan of sci-fi movies so I knew the alien that Sigourney Weaver blew out of the airlock was still floating around out there somewhere and it probably hadn't died yet. My weapon of choice was a plastic bag which could easily be wrapped around the head of my attacker in order to suffocate it.

Next I approached my parents and told them what had happened, and that I planned to attempt another launch that afternoon. They told me that I was crazy, that no one could just jump into outer space, that I had a bee on my shirt collar. But I didn't listen. They were obviously angry that they hadn't tried to leap into the cosmos themselves before their bodies had become weak and old, and felt that their youths were therefore completely wasted. We got into a big fight over the whole thing and they punished me, yet their authority seemed insignificant in light of all I had experienced so I decided to go on with the scheduled launch anyway.

My second launch was a failure. I was barely able to clear two feet, which according to my calculations wasn't even enough to break through the Troposphere. A little freaked out, I decided to recreate the exact conditions of the first launch, right down to the basketball in my hand and the same approach toward the basket. This too was met with failure.

Over the course of the next three years I attempted over seventeen thousand launches and none of them were successful. I tried to jump into space every morning after I got up, every weekday after the bus dropped me off at my house, every evening before dinner, and every time Kriss Kross' hit song came on the radio. Nothing.

Then one day my cousin James came to visit and I related my tale to him, from my first glorious yet short lived voyage into outer space to the years of crushing disappointment that followed.

"What's that?" he asked, peering down at the two foot long chain attached to my ankle with an anchor at the end.

"Oh that old thing?" I angled my head and looked down as well, for I had grown so used to it that I had forgotten it was even there. "It's just my punishment from that fight I got into with my parents after I told them about the whole space thing. I think it's supposed to teach me how to be responsible by having an anchor to take care of at all times."

"I think that's what's keeping you from jumping into space."

"Nawww..." I trailed off. Could it be? I had to admit the timing was uncanny, as my launch problems started right after it had first been attached to my leg.

I turned and ran into the living room in my usual awkward gait, the anchor barely resisting as it slid along the now-smooth grooves it had dug into the hardwood floor during my countless trips across the house over the years. My parents confirmed James' suspicions, explaining that I had simply been too young and that no good parent would ever allow their thirteen year old son to wander into outer space alone. Now, however, I was sixteen. Old enough to drive a car and purchase alcohol with a forged license. With tears of joy and a proud hug, my parents conceded that I was now mature enough to go wherever I wanted.

Without another word they extended the chain to a length of 75 miles and stood side by side in the driveway as I leapt into the air, waving after me in the orangish glow of the dusk.