Christmas used to be a time of year when everyone was reminded of just how much they hated being around their family. Grandma would give you something ridiculous like a depilatory cream or a piggy bank shaped like a car. Your parents would hand over something vaguely practical but undesirable like a fanny pack or a pair of mittens with jet planes on them. Your more distant relatives would admit that they have absolutely no idea who you actually are and would just send you small amounts of money. You'd pick out something equally out of touch with your immediate family's desires, give it to them and then you'd spend all day sitting around and talking about things that make you feel like swallowing ground glass.

Over the past two years or so that vague melancholy that accompanies the arrival of the Christmas season - a mix of nostalgia for the irretrievable joys of the Christmases of my childhood and dread of that year's impending gift exchange - has been superseded by a simmering rage. Christmas is now about politics, which is precisely what we did not need added to an already horrific holiday. You can blame some vague multicularist conspiracy or the last vestiges of inane political correctness, but let's be honest about whose fault this shit is: Bill O'Reilly and John Gibson. 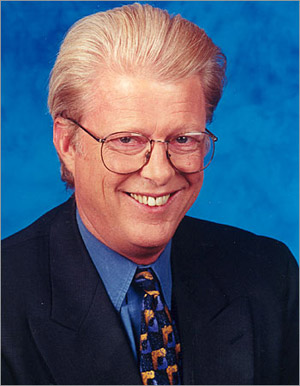 We all know about Bill O'Reilly. I have enough faith in the average conservative to believe that they are informed about Bill O'Reilly's stupidity. If, after all of these years, you accept what he says as truth then you're on roughly the same intellectual level as a retard abandoned by the side of the road and then raised by that robot that used to come with the Nintendo. O'Reilly literally sits around and makes stuff up and then tells you to be angry about it.

The liberals are helping the Russians buy up all of our flu vaccine! The liberals are working with the Chinese to raise money for North Korea to build nuclear weapons! Hillary Clinton was raped by Bill Clinton and gave birth to a dolphin! Let's all just pretend not to notice the fact that liberals don't control any of the branches of government anymore. Let's keep pretending like they're running everything and that we are being victimized by their boundless power and authority! The idea that there is some vast high-level liberal conspiracy to annihilate Christmas is not an unexpected charge from Bill O'Reilly, but I feel fairly safe in assuming that most rational human beings simply ignore what he says by this point.

John Gibson is a lesser-known idiot, but he's an idiot of the same caliber as Bill O'Reilly. Not only has Gibson almost obsessively pushed the idea that liberals are running around with flamethrowers torching mangers and ripping down Christmas banners, he also wrote the book on the subject. I'm going to go ahead and list the four key pieces of evidence in his book, according to his publisher's description on Amazon, that prove liberals are out to destroy Christmas: 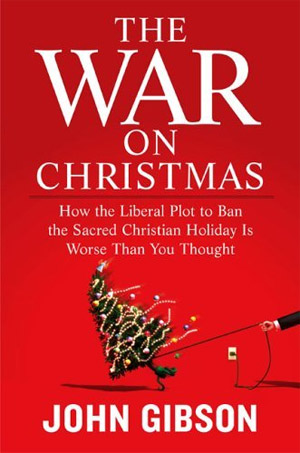 Those are the best examples, folks. The Liberal Anti-Christmas Storm Brigade is on the march because a county government in Rhode Island "banned Christians from participating in a public project to decorate the lawn of City Hall." The Yuletide Doomsday is at hand and it's all the fault of some Podunk, Rhode Island official with more free time than common sense. I'm sure the ACLU comes up plenty, but the ACLU is sort of like that guy who was discharged from the army for drinking anti-freeze and now spends all his time arguing on political message boards: he may hate what you say, but he will defend to the death your right to say it. The ACLU are probably the worst bogeymen the right has come up with. They make the Hollywood Communists of the 1950s looks like PCP-addled MS-13 enforcers with machetes.

Gibson suggests that the attempt to strip Christian iconography and tidings from holiday festivities is a part of the Secular Left's efforts to enforce tolerance. That may not sound all that bad to some of you, but to a lot of people on the right enforcing tolerance is a lot like enforcing yanking your scrotum off with a billhook. It's not that most of them are actually against tolerance, they're generally good folks, but tolerance is a codeword for "destroying Christianity." Saying tolerance or the even more ghastly "political correctness" conjures apocalyptic images of churches burning and mangers covered with blood. We're not talking about Christ's blood; we're talking diabolical blood like blood from a gay. Not even Andrew Sullivan gay, we're talking Isaac Asimov gay. Science fictiony gay.

John Gibson's response to all this humbuggery has been to suggest a spontaneous uprising among the oppressed Christians of America. He makes very clear that he isn't calling for a boycott of stores where "Merry Christmas" has been replaced with the anti-Christian hate-mongering of "Happy Holidays." No, not a boycott at all, a grassroots decision not to buy things from stores because of the decided downturn in Christ-related holiday cheer. Gibson goes on to brag about how his focus on anti-Christmas behavior at retail outlets has inspired millions to independently decide to stop shopping, which has in turn inspired those retailers to return to the One True King for their decorating tips.

The popularity of Gibson and O'Reilly's anti-Christmas meme has proven once again that Christians love martyrs, especially when they can see themselves on the cross. As a porn-loving, evolution-believing, rap-listening agnostic I don't subscribe to their particular theory of Christian victimization. Despite my skepticism, I did spend some time trying to think about why the liberal-industrial complex would devote so much energy to ineffectively stopping Christmas and replacing it with a sanitized pan-denominational holiday. Then, to my horror, I realized that even if the liberal plot succeeded we would still be stuck with the same horrible holiday with a slightly different packaging.

I am stating here and now, in a totally non-secret and non-conspiratorial way, that Christmas and all Christmas-like holidays need to be destroyed. I want those last few days of December back. I want to just sit around and wallow in my laziness. I want to maybe watch some DVDs or play some videogames, not drive hundreds of miles through snow to sit around with my family and contemplate suicide. I don't need to hear why my mom thinks she may have cancer or see my grandma start crying because someone yelled for half a second. I moved out of their house because I was being reminded too frequently of all of the reasons why I hate myself. I had just started to like myself, just worked past the kill-on-sight instinct when passing mirrors, and then they had to drag me back to their lair for another self-loathing regeneration session.

We're supposed to celebrate, so let's celebrate ourselves. Let's treat Christmas like a birthday minus all the looming mortality. This is OUR day. This isn't Christ's day or family time. Let's just fuck it all and stop trying to buy gifts for people we don't really know. We'll just hand each other cash and say "awesome!" If we want to talk, hey, we can talk to each other, but we don't feel any real need to just sit around and remind ourselves of why life is a horrible ordeal.