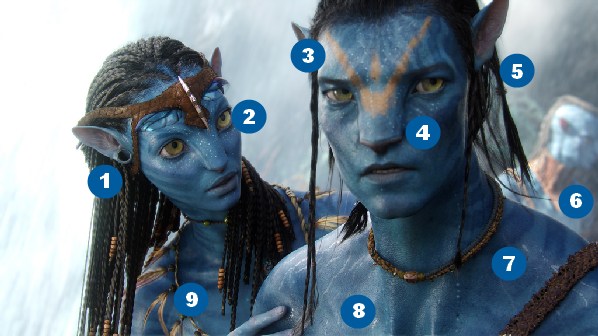 Although every other human-like feature of the Na'vi can be attributed to Native American culture, stretched earlobe piercings originated with African tribes. It's almost as if the character designs went out of the way to include something that's become a huge fad in first world countries and Appleton City.

In addition to the occasional ear stretching, tribesmen also hunt wild animals, live with relatively few possessions, don't center their lives around popular culture or a put-upon disdain for it, have no easy access to history books or literature or world news, and get bit by a wide variety of disease-carrying insects every day. Funny that we just chose the one thing to co-opt.

Eyes are the windows to the soul, so the more one-dimensional a character is, the bigger his or her eyes need to be as a form of compensation.

Before heading into battle against humans, nine-foot tall cat people with fangs need something to strike fear into their enemies. Something with pizazz.

I'm not sure if this was intentional - and I could be reading too much into it - but it seems like a lot of the Na'vi traits are animalistic, like they're more in tune with nature than the humans or something.

If a haircut is good enough for a skinny white dude with a bad mustache lurking around outside a convenience store or inside a comic book shop, it's good enough for badass warriors. (see: Jedi, Braveheart dudes)

I swear I saw him fall off a waterfall in Last Of The Mohicans.

Used as camouflage. Perfect for sneaking up on prey (which you respect, as it is part of nature) against the backdrop of any Picasso paintings made between 1901-1904 while the trinkets in your hair clank together like windchimes in an asthmatic giant's nostril.

Fur is very difficult to render (and clean off, as many of the people who are currently posting Na'vi drawings on DeviantArt will attest), so the aliens had to have skin. It couldn't be pink or tan or black, and current animation technology cannot produce the color green so here we are.

The biggest douchebag necklace on Earth is the seashell necklace, and we don't even kill anything to make those. 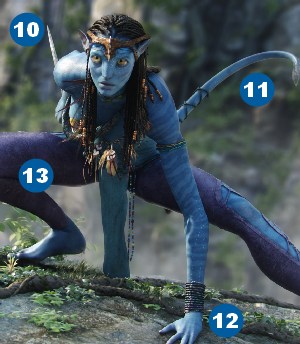 You'd think that any weapon used against another sentient being would be a bad thing, but only effective weapons are indicative of immorality. Any sort of blade or bow or charmingly slapped-together siege weapon is fine. Anything that requires standardized moving parts is evil.

11. Tails With Pointy Nubs At The End

12. Four Fingers And A Fucked Up Palm

It is not uncommon for Na'vi to pick fruit for one another, as they are kind and thoughtful. When there is a great distance between the fruit picker and the intended fruit recipient, the picker will point to the fruit and cock his or her head to the side as a way of asking "How many do you want?"

The recipient will then hold up the appropriate number of fingers. Since Na'vi are not gluttonous or eager to rape the land (like some species) (humans), they never ask for more than four fruits.

Thus, at birth every child has the fifth digit on each hand hacked off.

The most awe-inspiring pant of all is the sweatpant, and the second most mystical color of all is purple (the first is green, but well, you know). Combine the two and you have one of the most creative items of clothing in cinematic history. 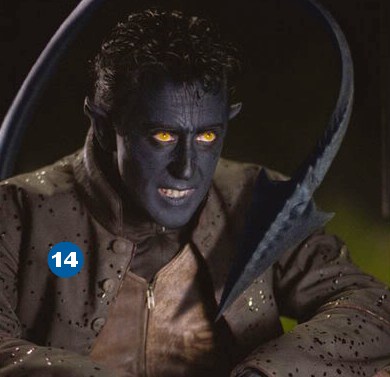 Another method of camouflage, donned while respectfully stalking and butchering orange hippopotamus-like creatures with anteater faces and tails with glowy orbs on the ends. 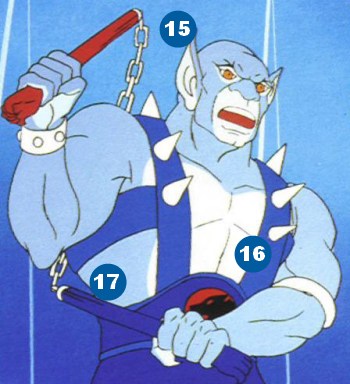 You know what other fictional race had pointy ears? Elves. From what I can recall, they tend to be in tune with nature as well. I know I'm going to get some letters making fun of me for this, but I really do think there might be some kind of a message going on here. If there are any film scholars or philosophers out there reading this, maybe you guys can figure it out.

16. A Font With Horrible Aliasing

Sorry about that. It's been bothering you this whole time, hasn't it?

We touched on this earlier, but I wanted to bring up the weapons again because Cameron did such a fantastic job of creating mind-blowing things we've never seen before - knives, bows and spears with slightly whimsical shapes, rocks, even broader environment concepts like very large floating rocks that you can walk on and animals with more than four legs.