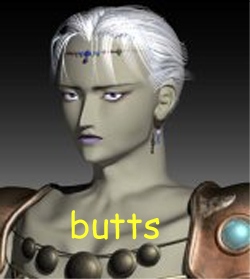 The main character’s name is Butz.

Yes, Square may try to retranslate this tragic hero’s name into Bahtz, Bartz, Bootsu, or Playable Character Number One, but Butz will always be Butz. And FFV’s weak story will not distract you from this. In fact’s Butz’s complete lack of personality will prevent you from watching him as a separate, fictional character; you will instead live vicariously through Butz as you think in terror OH GOD I AM NOW A BUTTS HOW IS THIS HAPPENING SUICIDE IS THE ONLY ESCAPE GOODBYE SWEET PIXELS

A famous newsgroup urban legend states that Square was considering the stateside release of this game, despite its possibly confusing job system. However, when their set of 13 year-old game American testers came upon the name “Butz,” they soon named the three remaining members of their party “TITZ,” “FARTZ,” and “DIX.” What followed was a giggle fit so intense, only tear gas could break it up. So it did.

Because of this debacle, Square decided to instead release the blight known as Final Fantasy Mystic Quest in America. This game was later sold in Japan as Fun with Colors and Numbers: Baby’s First American RPG. 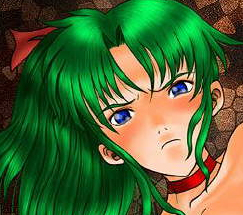 Let me explain one thing about Square RPGs. They used to cost around $80 in Americabucks, especially if you bought them from gaming specialty shops whose “specialty” was raping the wallets of 12 year-olds who enjoyed RPGs. This fiduciary violation is now felt by all people who venture into any store of the Gamestop company, regardless of their love of RPGs. It’s true that RPGs no longer cost as much as they used to – due primarily to the fact that you can now masturbate to them – but this retail chain has managed to compensate by offering three-dollar gameplay guarantees that only guarantee you will have three less dollars when you exit.

You may think I’m using Something Awful inappropriately as a forum to voice my concern about the price of games 12 years ago; this is untrue. I’m mainly using it as a forum to brag about my feats in Final Fantasy VI 12 years ago. You see, I managed to get every character up to level 99 (the 1994 equivalent of what’s affectionately known as “poopsocking”), a tremendous feat when all 14 playable characters are uniformly useless. Square coined this concept CMS (Combined Mediocrity System), which eliminated the burden of deciding which characters to include in a party. Essentially, CMS - paired with the ability of any character to learn any spell – made deciding which characters you wanted as your imaginary boyfriend/girlfriend the only factor in assembling a party. Here’s a quick synopsis of every character and their special abilities:

Final Fantasy VI is the best game ever.