Although this update may seem to be in the style of one of those rambling Jed Kirchner updates where he compares the moment he lost his virginity to the time he found the perfect placement for the quad damage powerup in his imaginary Quake 2 level, this is really just me getting rid of all the bad ideas I don't have any other place for. There's probably a good reason for that, but I'm not going to dwell on the very important negatives. If a bad idea won't stand up by itself, why not throw it in a pile with other bad ideas and call the whole mess a good idea? That's the concept behind Ozzfest and this update. As a result, this article is terrible and you won't like it but that's okay because I often forget to check my hate mail. 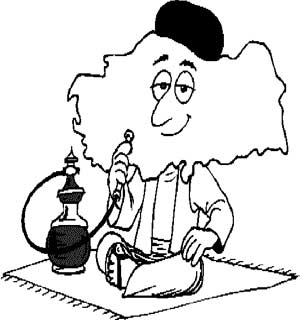 This is the wrong kind of turkey but it's getting high and it's a for little kids to color so how about that.For me turkey is a flower made out of meat that blooms but once a year. While it is true one can acquire turkey products at any time, the actual act of cooking a whole turkey seems to come solely on Thanksgiving. The other turkey products, such as turkey TV dinners or turkey lunchmeat, do not taste anything like the meat you rip off the bones of an actual turkey. I have been pleading with leading meat industry people to change the name of this second rate turkey to something catchy like "all-purpose meat slivers," but my Upton Sinclair-like struggle against the forces of uncontrolled greed have thus far gone without reward. On the plus side I've discovered socialism and as a result I now have supernatural powers and my car gets better gas mileage.

It's been close to a week since Thanksgiving wrapped its filthy hands around my neck, and there are still chunks of real turkey sitting in my fridge. Turkey sandwiches were good for the first few days, but now the meat is taunting me. I'm getting angry at it, to the point where I'm contemplating taking dramatic action against it. In dangerous situations, my first instinct is to fidget with my bowtie so that when I die I look as respectable as possible. It's often then that I grasp the fact I don't wear a bowtie, let alone own one. When all hell breaks loose and I realize that I'm not ready to die, I come up with a cunning plan that often times involves making a skateboard out of some random object and then throwing it at my enemy. After that I'm at my leisure to run away, which I do so. In the case of a fridge full of unwanted turkey, there was absolutely no way to pull off any part of my danger awareness ritual and the evasive actions it triggers.

I suppose the best thing to do would be to find an alternative purpose for the excess turkey, like maybe make clothes out of it. I suppose you could also give it to the homeless but I hate the idea of being an enabler. I guess the best thing to do with leftover turkey would be to make some kind of modern art piece out of it, perhaps in the shape of a real live turkey, and give it to a vegetarian to show them that you made good use of the animal you helped kill.

I have learned all too well that there is no time to talk turkey in the fast paced action environment of Adobe Counter-Strike, a popular online shooter that lets players act out their horrifying terrorist fantasies of blowing up seemingly useless desert slums. When you try to talk to the other players about turkey, they often shoot you or call you an obscene name. It occurred to me that with the new Source Engine from Valve, my perfect mod idea could now be realized. Imagine if you will two teams locked in the kind of bloody conflict we often ignore on the TV screen. Get this: each team has their very own three-story house. I'm talking a really nice house, fully furnished, and with plenty of rooms and windows and maybe even a pool in the back. Well, the plot twist comes when you realize that the houses can be driven like vehicles. So each team loads up in their house and they drive off to kill the other team's house. I can't tell you how inspiring it would be to see two beautiful homes circle strafing each other while bullets fly out of every window and players jump from roof to roof trying to inflict ultimate property damage. I think it would probably be the best mod ever and even better than that one imbecilic mod that combined the magic hero abilities from WarCraft III with Counter-Strike. Drivable houses are the future of gaming and that's pretty much a fact if you accept me as an empirical source. An alternative mod to this mod would be one where the houses can't be driven, but instead need to be furnished. Each team would rush to gather the most furniture from the center of the map and return it to their house before time runs out. In the end, the team with the most furniture in their house wins. But beware enemies that sneak into your house and destroy and steal valuable furniture. I think it's about time we had a deathmatch mod that appeals to homosexuals. 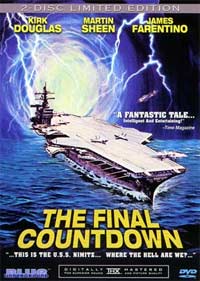 WHAT IS THIS A PRINCETON DEBATING SOCIETY? DAMN IT MAKES MY HEAD SPIN!If I ever – and I stress the if – find a genie lamp and a genie pops out and offers to grant me three wishes on the basis that the first has to be me asking for the motion picture "The Final Countdown" to be turned into a TV series, I'd say that I don't need the other two wishes. In "The Final Countdown," the USS Nimitz is sent back in time due to a freak time storm to December 6, 1941. That's precisely one day before the Pearl Harbor attack in case you are not good at knowing things. The crew then has to decide whether they use their superior firepower to destroy the Japanese fleet, or if they hide and try to get back to the future as stealthily as possible. It's only fitting that this concept should continue to explore the myriad of time-traveling aircraft carrier scenarios out there. For example, what happens when the USS Nimitz goes back and time and accidentally intercepts Columbus on his voyage to the new world? Or what about when they have to fight dinosaurs? Some jets against pterodactyls would make for some fine drama if you ask me. There is also room for a lot of tense drama onboard the ship. I came up with a plot where Warren Lasky (Martin Sheen) decides to help out around the ship by starting the USS Nimitz's first newspaper. He then drives Commander Dan Thurman (Ron O'Neil) nuts by harassing him for scoops. Well, at this point Dan decides to give Warren a taste of his own medicine, and starts a rival newspaper. The duo end up as a team when it looks like Capt. Matthew Yelland (Kirk Douglas) is up to no good. Of course in the end they find out Yelland was only planning a surprise party for the crew, and Warren and Dan feel pretty stupid and agree to cut out the horseplay. God I hope I get some royalties for this so I can buy some of that laser eye surgery.

I just now realized that Bush is doing far more for our country in Canada than he ever did while here in our country. Maybe we should let him stay there and just go on without a president for a while. I think we can do it. Most kids get to stay home alone at a fairly young age, and this great land of ours is at least fifteen or sixteen years old by now in country years. I think we are responsible enough to live without a leader and Bush might find it easier to befriend Canadians than make tough decisions.

One of those big choices in life, like choosing whether to go pursue a GED or go with Gandalf to the Gray Havens, is when you have to decide the appropriate time and place to end a bad article. I choose now.