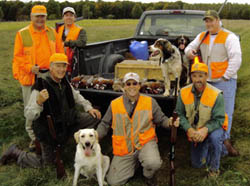 I guess The Bible would frown on this, but then again, God didn't have the foresight to cover hunting trips in that book of his.First of all, I want to thank you fellas for agreeing to this. When I decided to float the idea past you guys during last week's meeting, I had no idea it would be met with so much enthusiasm. In fact, I was planning on sneaking out during the raffle for that bumper boat if things took a turn for the ugly -- but here we are, huddled in front of a fire, our disgusting wives miles away, eating a whole thing of store brand Hamburger Helper because we're not there to share it with them. Don't give me that look, Marv. We're not all lucky enough to meet a high school girl with two dead parents and a modeling contract.

Anyway, if there is one thing I should stress, it is this: this trip is about hunting first, and gayness second. I know, I know. Some of you are just raring to explore the body of another man, to taste the sweet nectar of Miller Light, not from the mouth of a can, but from a mouth surrounded by a full beard and mustache. I am there and with you 100 percent. But since this is our first experience with gay, I think it would be a good idea to set some ground rules for this trip. And as president of our little organization, this responsibility falls upon me, along with buying the keg and misreporting any hunting accidents to the fish and game warden.

You've all heard the expression "don't shit where you eat," right? Well, you know as well as I do that we made a mockery out of that piece of wisdom when we turned that Port-A-John into a smokehouse during our last trip. You'd best forget about that delicious turkey with the tangy truck stop aftertaste, because this time around I'm being metaphorical. So Gus, let's say you and Zeke feel a stirring 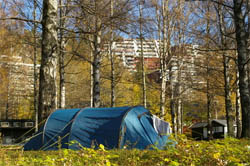 When you're camping, it's always a good idea to be "in tents." Heh, can you believe I got that from the sign in front of my church? while lying prone in the grass, waiting for the mother of all elks to wander into your crosshairs. Passion overtakes you, orange hunting vests get torn off, and both of you are shot when mistaken for two Bigfoots trying to repopulate their species. I can only strap so many corpses to the roof of my car, and I'll tell you this: raccoons will be all over your shallow graves after about an hour.

Of course, we're not all comfortable with the same levels of intimacy. Maybe Fred over there likes his mutton chops to be gently tugged. And Steve, you've made it clear in no uncertain terms that you won't be leaving until someone chews on your earlobes. That's fine. Just remember, we have been taught since birth to find the touch of a man as repellent as wearing a helmet while tearing up hills on an ATV. Point is, if you were to come at me now, all close-like, you'd find yourself laid out flat on the ground, and not in the way you were hoping. I shouldn't have to tell you that relationships are a two-way street; I haven't complained my way through Debra forcing hundreds of Dr. Phil episodes on me without at least picking up that little nugget.

Let's fast-forward three days. We leave the wilderness, taking with us some new experiences, and a few big beautiful beasts to bring back home. Heh, just kidding, Lester and Barney... In fact, we're all glad you were able to have those off-road Rascals specially designed to support your tremendous girth in an outdoors environment. But seriously, what happens here d 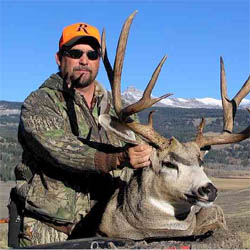 Just a buncha guys, guns, beer, and killing. Let's sit back and let the magic happen.oes not leave the splendor and trash fires of these woods. Folks, I am a man of stature in this community, and if any word of this were to leak out, I would have to resign my position and possibly remove my trophies down at the Thunder Lanes Bowling Center. Let me repeat: we are only gay for the weekend. After that, we will stop being gay until otherwise noted. If one of you slaps my ass during a future touch football game, it had better be the forceful, closed-fingered slap of a heterosexual man.

4. If Any of You Figure Out How Gay Sex Works, Let Me Be the First to Know

Seriously, people. Come right to me when you have this information so I can inform the rest of the group. I mean, I have some sort of general idea, but I really don't think my theory could be right at all. And it's not like I didn't try; I even watched a few episodes of that Glee show, but walked away with "Don't Go Breaking My Heart" stuck in my head, and some funny looks from the missus. Now let's get out there and find out what happens! And yes, Toby, we are still allowed to hold each other if it gets cold or scary. That's Hunting 101.