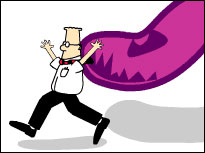 Thank you, Google. This is apparently a visual representation of a "roundup."

What the hell is a "roundup," anyway? Why does anyone want to make things round or put them up? Is a squaredown not good enough for most people, and why the shape and directional bias? I understand it's technical meaning as "gathering things together," but literally it makes no sense to me, and when things make no sense to me I become enraged and begin demanding additional lumber. Roundup indeed. You might as well make up your own word for it, like "Snoort." This will be the "Badder than Bad Clown Snoort." Take that.

I have seen a ton of amazingly scary and downright reprehensible clowns. I am not talking about the crappy, pathetic clowns that you see and sort of feel sorry for because they went to night school at Klown Kollege in the hope that someone might pay them to fall on their asses so that they can support their six children and their heroin-abusing spouse. Rather, this is the kind that believe themselves to be entertaining but that in fact are far beyond embarrassing and terrible. The kind of clown that thinks that it's ok to be a clown.

For some reason, the occupation of "clown" is still around today, even though most children shudder in terror at the thought of those greasepaint-wearing fools with balloon animals. There is a growing belief that clowns in all forms are repulsive and frightening and I must say that I tend to lean in that general direction when it comes to my opinion of those jolly marauders and beepers of aooogah horns. There is no reason that people should still be paid to prance about in baggy pants and twist latex into odd shapes for large groups of idiotic children. Not only that, but seriously, people should have more self-respect than to choose occupations like that. Rather work at Wendy's, even. 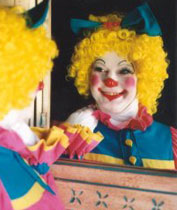 I didn't have a lot of exposure to clowns growing up. I guess I went to the circus a couple of times and wasn't scarred in the way that Zack "Chest-Editor" Parsons was by being forced to go to Clown School by sadistic parents. The reality of the situation, however, is that there are still a lot of clowns out there, and for whatever reason, they are still making money off of dumb parents who think that their children would enjoy having a clown come to feed on the souls of the living at their kid's party or whatnot. Nine times out of ten the kid would really rather spend the day on the stock market floor with their pedophile Uncle Bernie than be hugged and groped by a strange man in make-up and pompons waving sausage-like balloons about and laughing maniacally.

The occupation of clowning has been around for hundreds of years, and I say that that's hundreds of years too many. Maybe back in the day the career had a bit of dignity, but these days anyone can dress like a freak and fondle children under the guise of being a clown. Just look at these terrible excuses for clowns that are roaming about in predatory fashion out there in cybarrlande:

Exhibit A: Half-Pint The Clown 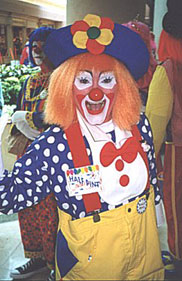 History: Roger was kicked out of his local grade school in Racine, Wisconsin when his fifth-grade teacher caught him forcing one of his classmates to eat an entire box of chalk while Roger spanked him with the World Book Encyclopedia. After his expulsion, Roger began working as an errand boy for the local sherriff's office but was fired when they found out that he was stealing candy from the office leukemia fundraising box.

Roger began a career as a fish editor soon afterward, editing out the hours upon hours of empty footage from the show "Outdoor Wisconsin Fishing" and keeping in the footage of the exciting catches so that they could be aired on television. That job did not last long, however, as Roger's insatiable appetite for film and his dislike of television screens of all sorts caused him to be fired in 1982.

Since then, Roger has been making his living as a clown on the streets of Racine. With the IQ of an idiot manchild, Roger is under constant supervision by the he Clown Authority to ensure that he will not harm anyone, but at times he comes dangerously close. In 1999 he was arrested for disturbing the peace when he was found naked with all of this make-up on in a city fountain, singing loudly and watching his balloon-ducks float by.

He is now available for parties and meetings but must be notified a month in advance so that his keepers may arrange the proper restraints and medications. Patrons should be warned that he is only four feet tall due to a genetic mutation beyond his control.

Exhibit B: Paul the Clown

History: Paul grew up in a large trailer park in Western Alabama. He was traumatized at a young age when his trailer was burned down by a traveling arsonist and the ashes were blown away by the largest tornado Alabama had seen in decades. He tried to rebuild his family home from scratch but his futile attempts were thwarted when he ran into financial troubles and was only able to afford large quantities of gum and old newspapers.

When his new trailer blew down in a freak 5 mph wind, Paul was at his wits' end. He packed his only belongings, a toothbrush and a copy of "Swank" in a shoulder-bag and walked away from the trailer of his youth into the booming metropolis of Mobile. There he was hired to pose for "before" photos at the local rhinoplasty clinic.

His charmed life did not last long, however, because in 1995, Paul was arrested for abuse of the suction device used at the clinic. Jobless and penniless, he resorted to the only talent he knew he had: making things out of gum and newspaper. Now he travels the world creating figurines for people out of gum and newspapers and evading the police, who wish to question him on the 1984 rape and murder of several children in the Mobile area. 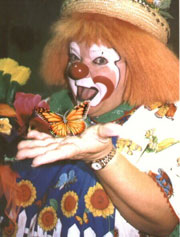 History: Marilyn always wanted to be a grade-school teacher but her dream was thwarted in 1974 when she was denied a teaching position at the Milton, Ohio School for the Deaf because she did not know sign language. Instead of learning it, Marilyn began hitting the deaf children in morse code in the hopes that she could communicate to them in a new way, thus teaching them to hear or face the punishment of her fists. She was arrested in 1986 on six counts of child abuse.

After her release in 1993, Marilyn decided that it would be in her best interest to learn the intricate art of butterfly-dipping in which she immobilizes butterflies that she finds in tubs of paraffin wax. With these she charms children of all ages by quietly walking up behind them and shouting,

Today Marilyn resides in the Hot Topic store of the local Milton, Ohio Mall. She makes a small living cleaning up the backings from Korn stickers purchased by youth in the mall and exhibiting her butterfly collection. She hopes to soon begin her own business entertaining at parties and such but unfortunately the Milton Police have forbidden her to spend any time unsupervised with children. Marilyn has compromised by sculpting her own children out of wax and she performs her act for them each night.

These clowns are just a few of the terrifying monsters one can find in the depths of intra/webnette horror. Unfortunately these people are everywhere and have not learned that it is simply unacceptable to be a clown in this day and age. Like I said before, I don't know much about clowns first-hand, but I do know that everyone I was friends with as a child who was forced to have a clown come to their parties was severely scarred for the rest of their lives. Some of them even gew up to have foot fetishes. Some of them voted for Gore. STOP THE TERROR.

Cranky Steve's Haunted Whorehouse is back for its weekly update, this time tackling a user map for the classic game "Doom II." Mista T goes after the travesty "Arcade," a map which is, well, not good. 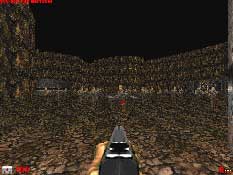 The map... well, that's pretty much it. It's just a map. A map with two barriers on the left side, a big open area in the middle, some barriers somewhere else, and a big-ass pillar for an exit. And it's brown. Oh, so brown. more brown than you can imagine. And hey, since Kim imported a bunch of Quake III Arena textures into this, the map is even browner than ever. It's as if this map was born from the sludgy bottom of a septic tank. And because Kim is a lazy fuck, she decided to duplicate this model of the inside of a human intestine 30 TIMES.

But Kim isn't too lazy - she still put enough effort into the map to make sure that there were different monsters placed in each map, and she did so in such a way that each level gets harder and harder, like an arcade game. Yup, this wad is just oozing with creativity, folks. But every level isn't complete without powerups and ammo, right? Damn straight. Kim had put tons of fucking weapons and ammo in each map in such a way that it puts REoL's overactive thing placement to shame.

I thought the last level of this map would be crammed with cyberdemons, but I guess I was wrong - IT'S CRAMMED WITH ARCH-VILES. Whoopdee-doo. Something even more impossible.

Sounds great! Take a look, all twelve of you remaining Doom II players!