The Battleship Movie is an Indictment of Western Civilization

Ominous signs abound for the project.

Its release was delayed by a year, possibly to add more computer-generated metal flaps on space ships in the constant Hollywood race to include as many metal flaps as possible on all alien space craft. The alien ships in this look like the offspring of something from Terminator: Salvation humping something from Battle: Los Angeles.

Liam Neeson, Zeus from Wrath of the Titans, the soulless sequel to 2010's Clash of the Titans, which was itself a screeching 3D remake of a campy classic, stars as Admiral Serious. Some horrible, possibly skiing-related, life event in the past couple years has turned him into a nihilist who will say anything and mean it for a paycheck. Stack enough zeroes on a piece of paper and he'll show up at your kid's birthday party and let them play opposite him as Amon Goethe in a bouncy castle.

Taylor Kitsch and Alexander Skarsgård, a couple jaws distinguishable only by hair color, are playing brothers. Well, they share a last name, I suppose they could be the ultimate gay-married couple, but that's setting everyone up for disappointment.

I see Rihanna ominously high in the cast list. No problem there. If DMX couldn't figure out how to act there's no reason why Rihanna can't also fail to act.

Brooklyn Decker plays the...you know, they could excite me more by casting actual babies in these roles. Just say fuck it and if you're going to mock audiences to their face just turn all the dialogue into baby talk.

Nobody cares anymore. The lights are out and there's just a machine somewhere, some sort of creepy Hollywood device filling up a gymnasium in Studio City like UNIVAC. Insert briefcases of money and some random object, throw a switch, and it combines them and spits out the reels for something like Battleship. Or actually Battleship.

It makes you wonder where all that money might have gone if the hate machine warehoused on Universal's lot didn't devour $200 million. 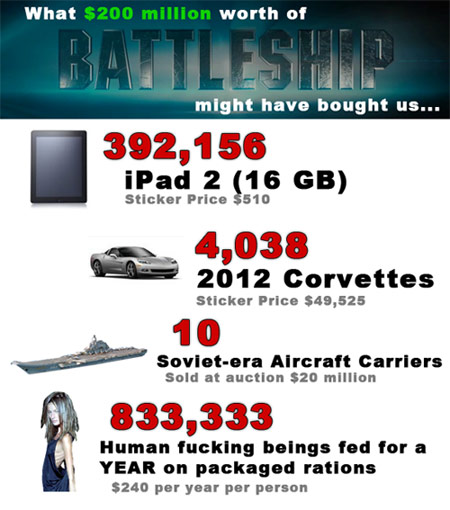 Battleship seems unlikely to make back its budget, which is bad enough that so much money was squandered, but worse still, it could become a huge hit and spawn a franchise, which is a far more thorough indictment of human civilization than any list of relative values I could put together.

This is what we have to offer the world. Battleship is our export. This is why nobody likes the United States any more. It's why the terrorists are winning.