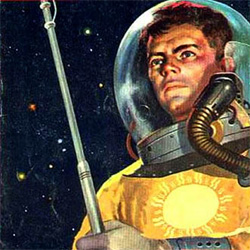 "He clicked on his radar. Nope, nothing for miles."Night hung heavy over the future. Admiral Duke Johnson adjusted his space technician suit with a heavy sigh. Before him sat eight lonely hours of scouring the surface for its precious moon dust.

He clicked on his radar. Nope, nothing for miles. And what was that shape approaching on the horizon? Duke peered into the distance and rubbed his eyes through his helmet somehow. "You son of a bitch!" The voice came from Randall Smith, seated atop a glistening new Astro-Bike. "Only cost me 2000 credits. Work a few extra shifts a week and you might be sitting where I am one day." Duke paused to turn up the loop of Use Your Illusion II that played inside his space suit at all times, then thought better of it. But if he had his way, Randall would be knock-knock-knockin' on heaven's door.

"What do you want, Smith? Come here to bust my balls?"

"Nope, found something that you might be interested in." Randall patted the second seat of his two-seated Astro-Bike knowingly. Duke shrugged, counted his losses, and jumped on. 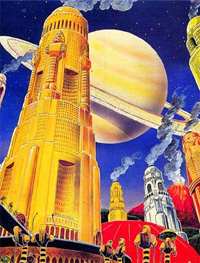 Duke lifted his magnification goggles, and with a simple command of "Computer. Please magnify my vision by the following percentage: 500. Thank you in advance." he gazed onto a lush, green field. Duke's heart nearly stopped when he recognized something he thought he'd never see with his own eyes: boys. Yes, he was sure that's what they were called -- he read of them in the forbidden Earth texts. Naked and muscular, their bodies shone with wet dew that shimmered in the moon-sun. Duke continued looking upon them, shocked into a catatonic state by their physical beauty.

"What do you think of that? I've been wanting to test this thing out on some moon mammals." Randall shifted the speed lever into the "go" position to show Duke he was serious. "You can't! Those aren't mere crater cougars or moon mice! Those are --" Duke bit his tongue -- of course Randall wouldn't know. Years prior, Duke hacked the government mainframe and uncovered the secret conspiracy known as "Boygate;" 200 years before his birth, certain laws passed which made legitimate relationships between adult men and intelligent, mature boys illegal. As time passed, further restrictions prevented even harmless contact and casual encounters at the children's museum. Further still, and the very concept of boys had been outlawed. Even The Great Mars Explosion of 2076 paled in comparison to the horrors wrought by Man's Law. 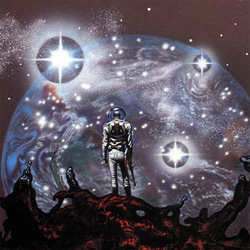 "Duke felt the figurative ground collapse under him as meteors fell out of the literal skies above."Duke swallowed hard when he remembered the final verse of the International Space Creed: "If I shall come in contact with boy, to the Black Hole Sun I must deploy."

Duke's hand shifted the speed lever back into the idle position and typed "COMMAND: STOP" into the built-in console. He looked at Randall with a steely reserve. "Don't you see? This is where the government's been keeping them!" Randall shot Duke a befuddled look. "Randall, can you remember anything before your eighteenth birthday?" A look of mild confusion washed over Randall's face, then realization, then sickness. Randall stared into the retinal throttle scanners and revved the Astro-Bike's engine. "Duke, we have to save them!"

Duke gripped Randall's uniform with his thick space technician glove. "It is forbidden!" Before Randall could free himself from Duke's grasp, the atmosphere split open with a moon-shattering rumble. Duke felt the figurative ground collapse under him as meteors fell out of the literal skies above. "No. Not now. Anything but that." Duke and Randall had no choice but to watch as a shower of fiery rocks rained carnage on the field of boys below. When the smoke cleared, not a soul had survived. Randall pounded the ground with his fist. "Damn it! We could have saved them!"

"No, Randall; as grown men, we are bound by law to not trespass in the way of boys." Randall let out the scream of a wounded animal. "But, Duke! They could have survived!" Duke shook his head solemnly. "Sorry Randall, but these actions were set into motion far before our time."

"But Duke, we're both members of the Northern Alliance of Moon Based Land Assessment. Surely, we can do something about this...?"

"No, Randall. No." Duke patted his gentle friend on the shoulder. "If only there was a way to send our message of hope to the past, to inform the world that the innocent fraternization of man and boy is just that: innocent! But how?"

Chapters 2 - 78 of Space Wars: The Moon Chronicles are currently under investigation by the Alabama Department of Corrections