While all the focus is on Donald Trump and his feud with runners up Ted Cruz and Marco Rubio, I believe Ben Carson might still be invited to the Republican debates. The evidence continues to mount. For example, in the February 25th Republican debate on CNN, if you listen closely you can faintly hear Wolf Blitzer say "and Doctor Ben Carson" during the introduction, although this is almost inaudible in the loud swell of patriotic music.

Later, still during the opening, as the camera pulls back, there are five podiums visible on the stage. With Jeb Bush recently scared out of the race and Donald Trump's wife not willing to participate, it is likely this podium was intended for Carson.

Shortly after this introduction, a dark complected figure who may be Dr. Ben Carson can briefly be seen at the edge of the frame.
You can probably see him best in this low-res clip (it was cut from the HD feed) from the CNN streaming site: 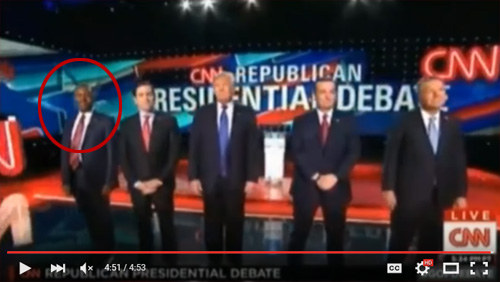 Shortly after the 12 minute mark in the debate, right after Marco Rubio shouts accusations about Donald Trump taking "standing dumperoos" at the backstage toilet, while Trump is countering by balancing a Nilla Wafer on Rubio's nose and insisting Rubio prove he is "really a good boy," Wolf Blitzer can be heard asking a Sotto Voce question to no one in particular. It's hard to hear, but I think he asks "Doctor Carson, who is your favorite Super Bowl Halftime performer?"
The answer to the question is even more difficult to hear as someone responds from off-camera, "Katy Perry is JonBenet." Admittedly, the high, soft voice could belong to Anderson Cooper.
I became convinced that Ben Carson was still in the debate at the 38 minute mark. Wolf Blitzer asks Governor John Kasich what the biggest threat to America is right now and Kasich answered, "Driving while texting." Trump knocked over Ted Cruz's podium at this point and said, "Way to go, dingus," but during a short cut to Blitzer you can hear the following exchange:

CARSON: Finally, I thought I was having the invisible dream again.

TRUMP: WHAT TED CRUZ DID TO BEN CARSON IS SHAMEFUL. THE FAKE ROBOCALLS, THE BJ GESTURE, AND I HEARD HIM SAY A TERRIBLE, TERRIBLE THING ABOUT DOCTOR BEN CARSON'S WIFE WHO IS A LOVELY WOMAN. JUST LOVELY. NOT A "DIRT DYKE."

CARSON: Can I respond to that?

CARSON: Okay the correct answer to your first question is bugs.

While no single piece of evidence is incontrovertible proof that Ben Carson is still being invited to Republican debates, it is my strong opinion that he was on the stage as recently as February 25th. If you connect the dots you will come to the same conclusion as me.