Please Do Not Kill Anybody Because of Slenderman

On Monday, June 2nd, two 12 year old girls from suburban Wisconsin attempted to brutally murder another girl to appease the fictional character Slenderman. This incident has been described as "tragic" and the perpetrators described as "insane" or "deeply troubled." I don't want to make light of mental health issues, but it would seem to me that a more accurate diagnosis would be that these two 12 year old girls are dumb as hell.

Slenderman originated in 2009 from SA forums member Victor Surge as part of a Photoshop thread. The faceless, tall man in a suit, often depicted sprouting spaghetti arms and standing ominously in the background of innocuous photos, tapped into the Internet's deep fear of skinny people stalking our forests.

He was especially terrifying to the people who try hard to be afraid of things and help each other succeed. The Internet's dire equivalent of a collective Ouija board party. Since the first Photoshops, the Slenderman myth has since been embellished into stories, web videos like Marble Hornets, hauntingly terrible video games, and even ripped off for bad Hollywood movies with Jessica Biel.

We are 15 years post-Blair Witch. These girls were 12. Found footage Youtubes, shaking cameras and bad Photoshops of people with socks on their head standing in the woods should not be fooling anyone. Especially not 12 year olds who should be better at the Internet and media culture than actual adults. But maybe all these chemtrails and Art Bells are actually making people dumber. Maybe there is a lot of lead paint being used in Waukesha. Maybe the Internet makes you stupid.

You might be a long time reader of Something Awful, someone who was tricked into coming here by a malicious link, or a member of the media who recently heard about Slenderman. If you read no further, please, do not kill anybody because of something that came from this not quite humor website.

Just Do don't hurt others or yourself because of Something Awful.

Because Slenderman is a blurry blob in the back of photos. He's a bad MS Paint picture on Deviant Art. He's somebody on tumblr who is shipping Slendy and Tails: 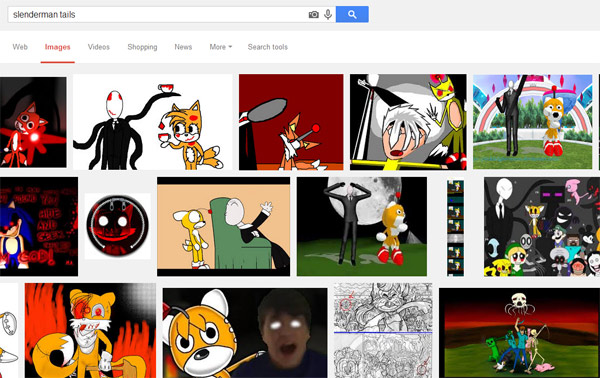 Slenderman is ridiculous. He has been organically sourced to the crowd and the crowd is dumb. The Slenderman fans can invest their dumb lives in the story just like Dr. Who fans or comic book fans or Welcome to Night Vale fans or any other fandom. They will talk endlessly about Slenderman:

(Don't actually read this, just scroll past it or your brain will melt out of your eyes.)

It's okay to obsess about Slenderman. Well, maybe not "okay" but it's normal. Internet normal. Okay, it's bad, but so long as you're not hurting anyone, it can be tolerated. We don't want your fandom's blood on our hands. If you need to know anything more about Slenderman, you should read through Mario Peterson's thoroughly researched history: 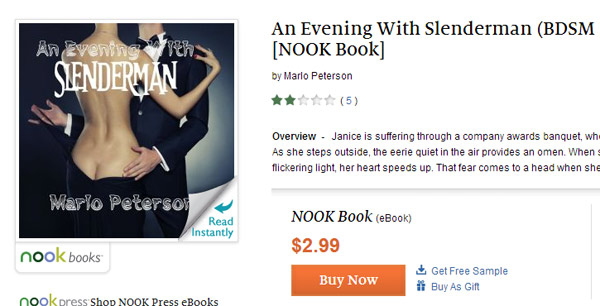 Actually, never mind, we don't want anything else on our hands either.