The next morning, I had a bit of a rude awakening in the BSmobile: angry Clevelanders were rocking my car back and forth in a manner which escalated from gentle to malicious. They carried blunt objects in their hands and the awareness of Bill Watterson's existence on their faces. It was the latter that worried me.

"Why'd you have to come 'round here again? Things were quiet!" A badly-bruised woman screamed at me while clutching my ankles and rubbing her face on the ground.

"Mah... Mah babies. Give me back mah babies!" A sunken-faced man in torn overalls weeped.

A little girl in a Garfield nightgown could only wail at the sky while waving the stump of what used to be her right arm at me. 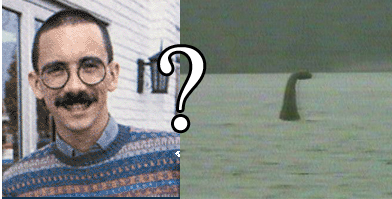 Negotiation with civilians usually isn't part of a Billstalker's line of duty, and I'd be lying if I said that they didn't set me on fire multiple times before I had a chance to calm them down. I climbed to the hood of the BSmobile in order to talk some sense into the mob. "Can't you see? I'm here to end this!" Before they could react, the sound of ringing bells interrupted all of us. The life left all of their eyes, and, as if nothing happened, the crowd spun around and shambled home. The sound of locking doors echoed around me as darkness quickly descended on the town. This is when I decided to track down a local Denny's to find out when they were going to throw out their irregular pancakes; Billstalking is hard, hungry work.

At this point, with all of the power in the town seemingly shut off, I was navigating only by the light of the moon, which had turned blood-red and inexplicably had a giant pupil floating on its surface. Mad laughter enveloped me, and could scarcely be pushed away, even with power of my "Radar Love" cassette single, which has been stuck in my tape deck since 1989. A shockwave blasted through my body; I had hit something, and was flung out of my car. Left in pitch blackness, with only my wits and novelty talking keychain, I utilized the latter, warding off any evil spirits in my midst with the electronic chant of "Fuck off!" "Fuck off!" "Fuck off!" "Fuck off!" "Fuck o--"

Something had smacked the device out of my hands. I reached in front of me to feel who it was, and I only the texture of bristly mustache passed through my fingers. Waves of sickness entered every pore of my body. I inhaled deeply and picked up on what could only be the smell of my own urine mixed with crisp autumn leaves. There was just one thing wrong with this picture: it was the dead of winter. Suddenly, a raspy, serpentine voice slid into my ear canal: 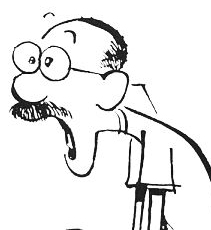 And with that, an unbearable, searing pain ripping through my arm caused me to black out completely; as I slipped away into the land of Morpheus, the last thing I could sense was the sweatery grasp of a middle-aged man. But before I could make any sense of this encounter, I awoke violently in the BSmobile. Trying to come to my senses, I peered out my passenger-side window to see just what dimension of beasts the Watterson had sent me to. The only thing that struck my eye was a decal of a praying Calvin peeing on Mexico and China, framed by a red Ford--Bill Watterson had sent me back to the very beginning of my journey! Before my panic could overtake me, the severe pain in my arm brought me back to my senses, as did the crystal meth I keep in my glove compartment. I pulled up the sleeve of my windbreaker to see what fatal wound the Watterson had dealt to me.

Upon seeing it, I emptied my bowels and bladder immediately with no regard to the state of my shoes. My friends, I now carry the cursed brand of the Billstalker. 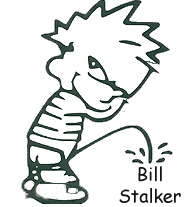 Pray. Pray for me, friends.