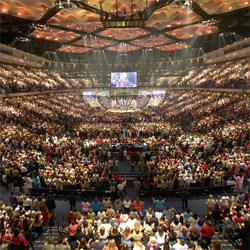 Holy Hand Broadcasting is a product of Holy Hand Ministry at Gulf Reach, the largest and fastest-growing church in the American continent. We are the dominant church, all churches operating within our broadcast area are subservient to our instruction. Conflicting messages or instructions should be considered nullified by the Holy Word of God as spoken by our Pastors.

Holy Hand Ministry was founded in 1973 in Plano, Texas by Pastor Errol Pappin, Jr. Adult human male Pastor Pappin believed that the End of Days were upon us and that to combat the threat of the Unfolder he must gather the faithful and spread the Gospel of Resistance. Only through constant struggle against the manifest sin of the Unfolders and their allies could man hope to overcome and earn his place in Heaven.

The guiding principle of Pastor Pappin's works was the idea of Instructional Evangelism or Practical Evangelism. In the darkest days of man's struggle against the Unfolders the Word of God was the only manual to which we could turn. Biblical combat, battle for souls, raged in the Texas Panhandle. Pastor Pappin and his flock confronted the minions of Satan and their allies and smote them with divine fury. And the Devil was driven out of all bordering Federal Zones, establishing Pastor Pappin as a force of righteousness in those desperate times.

Pastor Pappin fought alongside the Robertson Irregulars at Chicago and helped push back against the Unfolders in our nation's darkest hour. It was through Pastor Pappin and the prayers of the faithful that God Sent His Holy Choir. And the Lord's Will manifested in His Angels to destroy and oppose Satan, to thwart him at every turn, and to tip the scales in favor of the United States of America in our long struggle against the fiends, and the atheists, and all who disbelieve.

Thought Pastor Pappin was reduced to a jelly state by molecular debonders, his will and his teachings live on through our current Pastors. They alone relay the Voice of God and His Angels. They continue Pastor Pappin's Instructional Evangelism in these, the final chapters of our victorious crusade. 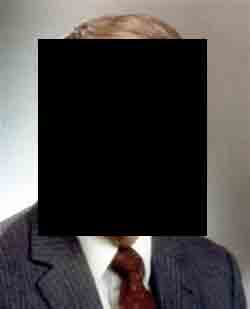 Pastor Vulge Espr Corrinthsk III hails from The Citadel Lunar Prison. The son of hero-astronaut Cody Wyatt of Wyatt's Zero-G Lancers, Pastor Corrinthsk has been a follower of Pastor Pappin since the beginning and helped to found dozens of expansion churches. He founded both moon churches and a prison ministry to reeducate perpetrators of Moral Threat.

You can hear Pastor Corrinthsk Monday through Friday during PM tones and following the ration benediction. 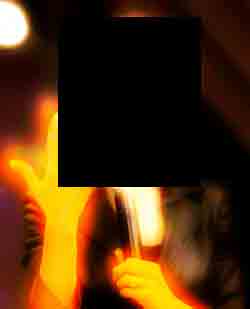 Pastor Ella Bertrand replaces Pastor Diane Morrison, who was a confirmed Moral Threat, but because of her long service to God was been Called to Serve by the Great Angel of Texas-22. Very little is known about Pastor Bertrand. She died in 1999 and miraculously returned in 2001. She speaks with two voices simultaneously and her touch raises welts. She does not eat, sleep, drink, or sweat.

You can hear Pastor Bertrand Saturday and Sunday during broadcasts and rebroadcasts of the Compulsion of Vigilance.