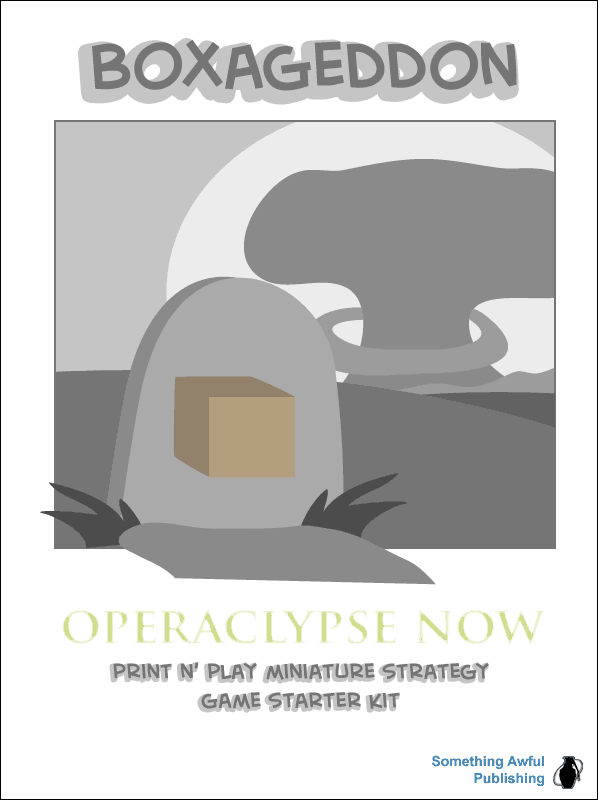 Welcome to the harsh realm of Boxageddon, where rival box factions are locked in an eternal struggle for dominance of a strange landscape not entirely unlike our own.

This starter kit will introduce you to the game with an easy-to-follow campaign, Operaclypse Now, in which you will print and craft your first miniature units from the Cardboardian Militia and Metallohedron Protectorate, then put their skills to the test in a desperate bid to enjoy an opera.

Once you've mastered the basics, turn to section IV for more ways to delve deeper into the Boxageddon universe.

- At least one pair of six-sided dice. Any old dice will do, whether they come from a dusty board game in your closet or the dark recesses of your father's secret pornographic dice drawer.

- Miniatures, Stat Cards, and Action Ruler - all obtained by printing this image: 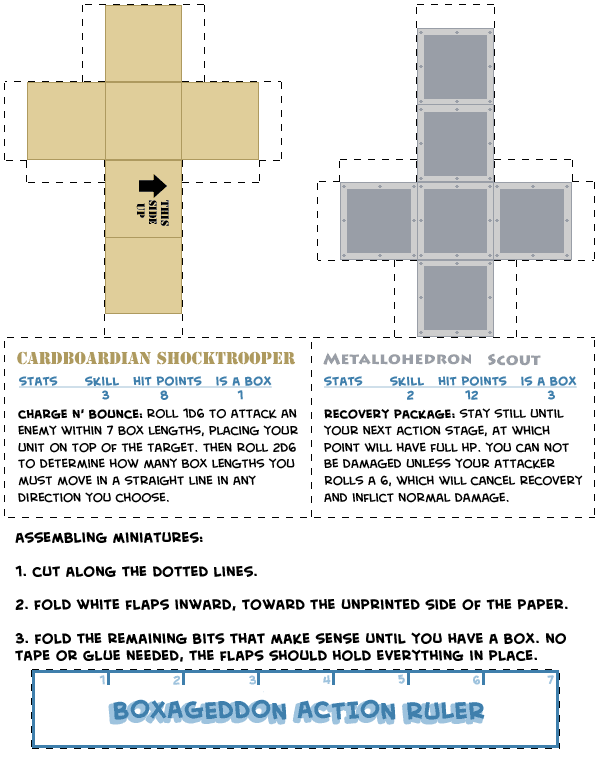 Boxageddon is played in a series of turns in which one player moves a unit, performs an action, then executes an extraneous dice roll before the next player's turn. To determine the turn order, have everyone roll 1D6. The person with the highest roll will be the first to make an argument for why they should have the first turn, then the next highest roll will plead their case, and so on.

When playing a solo game, you obviously don't need to do any of that. Simply roll 1D6. If you get a six, you get to play the game. If not, put everything away.

After choosing a field of play (anything from a kitchen table to the floor of a prison shower), each player will place their unit on opposite ends of the battlefield, with the miniature's back edge resting alongside the agreed-upon boundary.

The first player moves his or her unit up to seven box lengths in any direction but the fourth dimension, for the sake of simplicity.

The unit can now perform one of several available Actions:

1. A campaign-specific action. In the case of Operaclypse Now, this action is: Enjoy The Opera. Declare that you would like to Enjoy The Opera, then roll a number of dice equal to your unit's Skill, as displayed on its Stat Card. If one of the dice is a 6, your army will accumulate one point of Enjoy The Opera. If not, the unit will lose one Hit Point (also referred to as HP).

If any Action calls for you to roll more dice than you have (for instance your character skill is 3 but you only have one pair of dice), simply reroll the lowest dice from your first roll.

2. A standard attack. Unless the unit has been equipped with a ranged weapon (not included in this starter kit), it can perform a melee attack as long as there is less than one box length separating it from its target.

3. A special action described on the unit's Stat Card.

After the Action Stage has ended, the player must perform an Extraneous Dice Roll with all available dice. The result does not matter. It has no signifigance whatsoever. However, If a player fails to complete this dice roll - through forgetfulness or a gravity anomaly that carries the dice away before they can come to a stop - all of his or her units will suffer one point of damage.

At the end of this stage, the next player takes his or her turn.

When a unit is reduced to zero HP, it is immediately removed from the table. When one player eliminates all opposing players' units or meets the objective of a campaign (in the case of Operaclypse Now, accumulating three Enjoy The Opera points), he or she wins.

A moral victory can be attained by pointing out that the winning player could have used the time he spent playing by volunteering at a charity, and claiming that history will not look upon today's events kindly.

If you had fun with this introduction to the game of Boxageddon, there's plenty you can do to immerse yourself in its unique universe. For instance, it's possible to modify the basic miniatures into works of art that will make your opponents' jaws drop.

Try buying a box of miniatures from our competition for around $35, assemble your favorite, clean it up, and glue it to a base:

Then take a Boxageddon miniature and combine the two to create a stunning conversion:

That's just the beginning! The only limitations are your imagination and your severely limited skill set. E-mail us with photos of your unique creations and we just might feature them in our next publication.

Keep an eye out for the upcoming Bigger Than A Deadbox expansion pack, which offers a large scale skirmish campaign, eight additional units, and new equipment that adds new layers of strategy to the game!