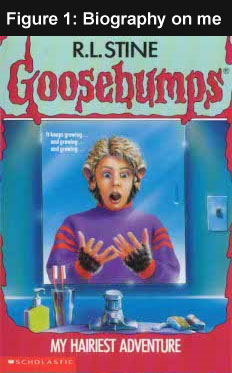 I guess I should start this off with some sort of disclaimer stating that I've been hairy for quite some time, and this freak situation was not completely unexpected. The whole ordeal started with the first wave of puberty, which struck me much, much earlier than anyone else in my class. While my fifth grade peers watched some awkward ass sex-ed VHS, I just sat in the rear, arms behind my head, leaning back against the wall like some smug Gulf War veteran. "Welcome to the Shit, boys." To be honest, puberty 1.0 wasn't that big of a deal. Aside from a few uncomfortable instances at the pool where I was forced to explain why a forth grader had armpit hair, everything went smooth.

Hair continued to spread across my body like ants on a candy bar throughout middle and high school. It started at two disconnected locations on my chest: a pencil thin happy trail and a dead rat on my sternum. The two separate and diverse hair tribes slowly grew to one another until a natural bridge linked them together. If my body was earth, then little primitive pubeinoids could now cross over to the fertile chest land. Cool, I thought, but most people disagreed. Though Bond films and anything made for TV during the 80's and 90's would present many hairy characters, by the 2000's chest hair in entertainment was reserved for criminals, Russians, and--more often than not--both. Hair, in our culture, is now considered disgusting, and everyone who saw me seemed shocked, embarrassed, filled with pity, and/or ill upon seeing it. Sure, it was gross, but it was mine, and I guess there was some pride in being one of the hairier boys. Hell, I wrote an article about a record setting back hair. On the other hand, the weird obese kid who sat beside me on the bus probably felt a similar type of anti-social pride when he bragged about eating twelve bean burritos a week, so maybe my mental base was a little off. But what other choice did I have?

Looking back, the whole thing was a little absurd. I mean, you know when you go to Subway for a $5 meatball sub, and the kid who's putting way too much marinara on your sandwich has that sparse, half grown mustache? He looks like shit, right? Like he receives an isolated daily dose of chemo to his upper lip. He's making your sub, and all you can think about is how fucking horrendous his face looks. You want to tell him, but then you second-guess yourself. Maybe the moustache shouldn't be pointed out, maybe it's more of a disability than a piece of food stuck in someone's teeth. You don't tell an amputee that he's missing an arm--he fucking knows already. Maybe telling him that his moustache looks like trash might crush his worldview. He might look in the mirror and notice that he has more hair on his toes than his face. He might not be able to handle that realization. Well, imagine that punk's moustache spread over an area of about four feet of pasty-flesh. That was my chest. That was me. I wasn't dumb. I knew it looked like shit, but whatever, it was my shit, and I could grow more than anyone else. I was, in a way, the shit lord.

For the next few years, my hair and I got along, to a certain degree. We had an uneasy relationship at best--I grew it, it grew on me, it was ugly, I was ugly. Like the two kids you knew in middle school that played Uno at lunch not because of friendship, but because of a total lack of friendship from the majority of the class, my hair and I were bound together. We had no one else. Swatches and streaks of fur crisscrossed my chest like a hair based Jackson Pollock piece, and I lived with it. The hair growth tapered off at some point, and I kind of just got used to it. Whatever. But now things are changing. It appears that I'm going through puberty again.