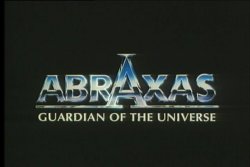 Overview: To quote Netflix, "Abraxas is a police officer who skips across galaxies in search of bad guys. His latest intergalactic chase has him hot on the trail of Secundus, a defector of the police force who now spends his time impregnating human females." Too bad that synopsis is pretty much completely wrong.

The Case For: If you like lots of random pointless explosions, you might enjoy small segments of this movie. Also, someone probably got a really awesome pyrotechnic demo reel out of this thing.

The Case Against: Abraxas spends the rest of the movie getting his ass kicked and making passes at small boys. Plus he looks like Terry Bradshaw. 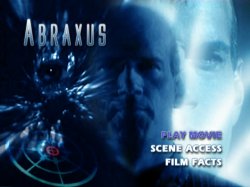 This movie is so awesome, its own DVD title screen doesn't need to bother with spelling the title correctly.Ah, Jesse "The Body" Ventura. With his feather boa, entrancing chrome dome, and voice that sounds like he has been cursed to play a neverending game of Chubby Bunny, it's no wonder that an entire state turned over control of its executive branch to him. Sadly, his accomplishments in the world of film are somewhat less exemplary. Unlike fellow grapplers-turned-leading-men Hulk Hogan or The Rock, Jesse Ventura only ever had one starring role. Not to say that this is bad, since starring in one movie is infinite percent more than most people ever get to do. However, unlike relative masterworks like "Walking Tall" or "Santa With Muscles", Jesse Ventura had the unfortunate luck of starring in the somewhat less prestigious "Abraxas: Guardian of the Universe". The following graph illustrates how good an idea this turned out to be:

As you can see, "Abraxas" remains the nadir of Jesse Ventura's life, although the whole XFL thing comes close. But it did invent that on-the-field camera view that the NFL stole, so it had that going for it, at least. On the other hand, I don't think anyone is going to steal anything from "Abraxas," ever.

The movie opens with Jesse Ventura enduring some sort of electroshock therapy, providing foreshadowing for the feeling a viewer will be forced to endure for the next ninety minutes. The voiceover explains that Ventura is an 11,000 year old being employed as a "Finder", which are some sort of intergalactic cops that solve problems and track down criminals on far-spread worlds, not unlike Jedi, although infinitely more retarded. Turns out his latest assignment is to bring in Secundus, his ex-partner. "Secundus" is actually an old Greek name meaning "secondary character we don't care to spend much time creating a backstory for."

With that sparse introduction, the movie wastes no time turning up the heat. I mean this quite literally, as the beginning of "Abraxas" has some of the most gratuitous fire and explosions I have ever seen, at least until the ending of "Abraxas". Setting aside the minor plot shift where suddenly the movie is showing two guys in a snowy forest running around shooting laser guns at each other with no explanation, literally every camera shot ends with a big explosion and one of the two guys ducking or diving for cover. A laser beam hits a tree and the tree explodes. A laser beam hits a rock and the rock explodes. One of the guys dives over a snowy embankment, narrowly dodging a laser beam, and the SNOW EXPLODES in a big orange fireball. At this point I became convinced that this would either be one of the best or one of the worst movies I had ever seen. I leave it as an exercise to the reader to determine which it turned out to be. 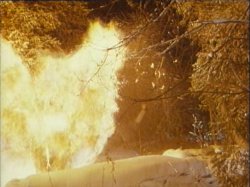 Burn, snow, burn.As the two men continue blowing large chunks out of the picturesque landscape, the movie cuts to Guardian of the Universe HQ, which appears to be the set from Mystery Science Theater 3000. Being Guardian of the Universe turns out to be a pretty low-level job since the two men who reveal themselves as Abraxas's bosses look like they just stepped out of a Three Stooges short. They exchange some expository dialogue, talking about Abraxas's mission, and then Curly says:

Curly: The planet they are on is fourth from the star. The local inhabitants call it "Earth."

I'm not sure what the assumed nerd quotient for Something Awful readers is, so in case you're not guffawing and smacking your forehead in indignation I will point out that Earth is, as NBC taught a generation of schoolchildren, the third rock from the sun. If you'd forgotten that fact and the aforementioned quote didn't set off any warning bells, don't worry; you're still perfectly qualified to write and direct movies starring balding ex-wrestlers.

Back on Earth, Abraxas and Secundus continue running around shooting and punching each other while every object within a ten meter radius spontaneously combusts through sheer force of will. To show just how epic the struggle between good and evil is, at one point a patch of snow catches fire, an anomaly which does not faze the mighty warriors.

During a break in the pyrotechnic action, a teenaged couple stop their car along a nearby dirt road. Clearly stated rules of movie plot development states that the guy must try to force himself upon her, which he gets right down to doing. The girl Sonia, on the other hand, pushes him away over and over, thereby defining herself as "chaste girl who is pure of heart and thereby immune from harm" as opposed to "dumb slut who gets stabbed to establish credence for urban legend about psycho killer". Incidentally, I always wonder what exactly the girlfriend thinks is happening during the drive to the secluded area. Is your boyfriend an amateur astronomer? Are you going to dig up some buried treasure? No, you dumb broad, he's getting ready for some grab-ass in the boonies. Don't be so shocked. He just wasted two bucks in gas getting out here, who are you to get frigid all of a sudden, Jesus. Wait, what? Oh yeah, the movie.