StarLink Productions caught my eye for one reason - they imply that they're the booking agents for Hall & Oates. Now, for any of you who haven't caught on yet, I am not half of the most successful pop duo in history. For one thing, his middle name isn't really "Fucking," I don't think. But I digress. I am telling you these people are assholes, and they're possibly misrepresenting themselves. What you're supposed to take from the Web site is that these guys are the best booking agents in the "aging white people" demographic. What actually seems to be the case is that these people have the phone numbers of actual booking agents. They call those guys, figure out the cost, and then add a nice little gratuity for themselves. It's a grift! A sham! And a fucking terrible-looking, poorly researched one at that.

I don't want to call these guys liars outright, because nothing they say on the Web site seems to be false, exactly. But I do want to point out that for a company that has supposedly handled so many shows, they have very, very little proof. And it's shitty proof at that. What they do have a lot of proof of, though, is the absolute worst collection of special event guests you could ever imagine. Are you having a diabetes party? Well, we will ignore the obvious question of "What the fuck, why would you do that?" and skip right on ahead to the next question, "Well, have you hired Captain Glucose and Meterboy, a totally official superhero duo that fights the good fight against diabetes and production values?" 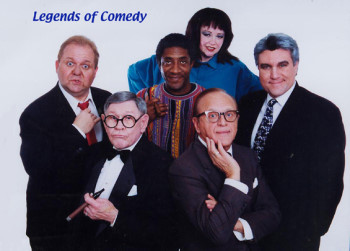 Let's talk intentional comedy now! Sort of! You can book legendary comedians through StarLink, but by 'legendary comedians,' they mean 'a bunch of barely look-alikes who will rehash their routines.' Who hasn't wanted to see Roseanne close out a show that George Burns opened? NOTE: I heard that if you ask for a Gallagher impersonator, they just send the real Gallagher. You've been warned.

Anyway, there you have it. Love celebrities and hate your money? Want to pretend you've befriended the Hollywood elite? StarLink is there to make your pathetic, co-dependent dreams come true!