That's Why You Never Hire a Skeleton

On Monday morning the stench of death was in the air. I arrived at the office early and found myself overwhelmed by a macabre odor lingering in the air like the rerun of an annoying sitcom scheduled just before the one show that you actually want to watch. Concluding that the smell was somehow related to the renovation project going on down the hall, I brushed it off and grabbed a cup of coffee from the break room. Returning to my cubicle with a fresh beverage, I set out to conquer the stack of papers resting on my desk from the week before.

That's when I heard a sound I would never forget. It was a shrieking laugh that ravaged my ears and dispatched freight trains of fright up and down the railroad tracks of my spine. It was meticulous and evil, and it made short work of each and every nerve ending in my body. After thirty consecutive seconds of aural torture in the form of a maniacal laugh, I jumped up and stormed out of my cubicle towards the source of the noise.

I quickly glanced in all directions, letting my eyes chase my ears in a dizzying fashion until I honed in on the source. It was the copy room, and a small crowded was gathered outside. Feeling tasked with the duty to yell at whoever was laughing, I rolled up my sleeves and stormed towards the door.

"What's that damn laughing all about?" I demanded to know.

My haste got the better of me, as I failed to notice that my boss had crept up behind me like a human cape.

"That," he scornfully said, "is the new employee. His name is Mr. Marrow and he's going to be working the copy room."

"Well," I said defensively in a slightly disarming tone, "why is he laughing so loudly?" 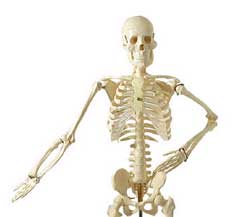 "Yes, a skeleton. I think you should go introduce yourself – make friends with the guy."

"If it will get him to stop laughing, I will do it."

The copy room was as dark as the space underneath a bed, and more menacing than any copy room had ever been. I slowly pushed the door open, which simultaneously made the laugh sound louder and gave it a creaking accompaniment. There was total darkness in the room save for a star field of small green and red glows emanating from the copy machines, printers, and other appliances. There was also a golden glimmer reflecting light from the open door. It was a medallion floating in the furthest corner of the room – the same corner the laughter came from. It was Mr. Marrow, hiding in the corner, laughing maniacally at some horrific joke none of us knew.

The laughter stopped. But sadly, there was no silence. Mr. Marrow switched from laughing to vibrating. My ears were drowning in a cacophony of grating teeth and twiddling bony digits. My heart throbbed so frantically I worried it was going to run out of beats and leave me to die in the newly haunted office copy room of death.

"Look, I know you're new here," I said, "but that's no excuse to laugh so loudly. If there's a funny e-mail or something going around, that's okay, but there is a limit to these things you know!"

What happened next probably took ten years off my life, and twenty off my bowels. That monster began charging at me. It was as if time slowed to a crawl – the kind of desperate crawl you see when you knock an old woman off one of those electric scooters at Wal-Mart. I could see the individual bones jump into motion, setting off chain reactions. It started with the hipbone, which was connected to the leg bone, and in turn to the foot bone. Within a second this clockwork of moving bones was near me, and all I could do was stand frozen like a geode stuck in quicksand.

Several long seconds later, I found the strength to run out of the copy room, albeit as a defeated and wrecked man. Mr. Marrow had charged up close and laughed his horrific laugh right in my face while flailing his limbs so madly that they tore the nearby shelves of paper and supplies asunder. Seeing him up close and personal was chilling beyond words. His gaunt, naked form, the hollow blackness of his eye sockets, the disturbing allure of that medallion wrapped around his neck – it all came together in one complete package of terror and sold itself to me in one easy payment.