For every military encounter immortalized in history books, a hundred others only live on in the fleeting memories of those who survive and in the impartial soil of the battlefield that swallows up the blood of the fallen. These are the Civil War battles that you have never heard of. 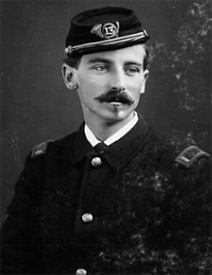 Private Quentin Thule, 1862Crouching before the warmth of a campfire on a particularly chilly night in Maryland in the winter of 1862, a soldier in the Union army by the name of Quentin Thule regaled his fellow servicemen with tales of his romantic encounters.

At one point, Thule claimed that he had hollered into a woman's vagina, then heard his own voice echoed back to him moments later through the young lady's mouth, nostrils, and ears.

This angered Dale Adams, a medic who refuted Thule's story. After finding a stick, he went on to draw an intricate representation of the female anatomy. The ovaries, he argued, would act to dampen most of the sound before it could reach the woman's intestines.

Thule, however, remained firm. The incident was not made up.

"It happened in Connecticut," he insisted, arching his eyebrows. That statement, in his mind, made it inarguable. Connecticut. Finality.

For the next three years the two soldiers served together, debating the plausibility of vaginal hollering at every opportunity - occasionally in the heat of battle with Confederate forces. Neither man was able to convince the other, but scientists generally agree that Thule and Adams are now dead.

In the summer of 1863, the Army Of Mid-Northern Virginia's Third Corps set out to join the Confederate forces in the battle of Gettysburg. Somewhere in the hilly landscape between Virginia and Pennsylvania, the Corps' second division found itself separated from the main force. When it became apparent that regrouping with the other divisions would be impossible, Commander Elijah Caine led the 29,000 men of the Third Corps on a direct route to their destination, eschewing the safety of roads and trails in an effort to make up lost time.

As the afternoon of June 27th transitioned to twilight, Caine's forces came upon Dungaree Hill, a pock-marked mound with a gentle fifteen degree incline that came to a summit approximately thirty feet above sea level. Since the Third Corps had not been outfitted with the picks and ropes that were necessary for scaling mountains, Elijah Caine's advisors recommended that the forces walk around the base of Dungaree Hill, which was no more than fifty yards across.

Caine, however, refused to deviate from the straight line between him and Gettysburg. Time was of the essence. His men would march on.

What followed was one of the bloodiest engagements of the entire war, as illustrated by this excerpt from the journal of private Jeremiah Blythe:

My dearest Elizabeth, in this dark hour your the sweet memory of your homely features is all that keeps me going. I have borne witness to too much death in my nineteen years, too much pain and cruelty to return to you as the innocent boy you fell in love with. Even so, I continue to dream of you.

It has been three days since Commander Caine ordered us up that God-forsaken hill. Twelve thousand men have been lost to its gradual slope, screaming as they slide and tumble at a pace almost as fast as a light jog.

If we had the proper equipment, we might stand a chance. If we didn't march in single-file with the first twelve men walking backwards, our casualties would be far fewer. If Commander Caine allowed our dynamite reserves to be transported on a wagon instead of requiring each man to carry a stick between his teeth at all times, my closest friends might still be alive.

Throughout the Civil War, both armies focused on training recruits how to reload rifles and line up in various formations. Very little, if any, emphasis was placed on the act of aiming at and shooting the enemy. The folly inherent in this form of drilling would not become apparent until April 3rd, 1864, when Union and Confederate forces squared off in the outskirts of Cranesburg, Louisiana.

For three weeks, some 13,000 men arranged themselves neatly, fired their guns into the ground, then reloaded with impeccable precision.

The death toll, as you might expect, was unusually high.

At one point the Union arranged themselves into the shape of a giraffe so perfectly that more than three thousand Confederate soldiers were blown to pieces. When the Confederates counterattacked with a flawless synchornized reload, the entire western half of the Union frontline was torn asunder. Those that weren't eviscerated were horribly disfigured.

The senseless cruelty inflicted at the Battle Of Cranesburg led the creation of international war crimes, acts so brutal that they can not be carried out even in the chaos of war. To this very day, no soldier is allowed to line up in formation, reload a weapon, or wear shorts that show more than three inches of skin above the top of the knee.