Much to my dismay I received an e-mail from the ever-friendly Cliff Yablonski this afternoon. Supposedly Lowtax had requested that he update the front page. He didn't run this by me first, because he knows how I don't get along very well with Yablonski. Unfortunately for me, Cliff lost his password (at least I think that's what happened) and with it the ability to post on the front page himself. That's what his 6-page rant of an e-mail was all about. Here's just a sample of it:

Asshole,
That pencil-armed dope Kyanka told me to update his stupid web thing but he fucked up as usual and broke my secret code or something. I can't put this fucker up so I need your melonass to put this on the web thing for me. I remember last time I told you to do something you dragged your feet like a goddamned little girl, so get it in gear Tubs Malone or I will shove my fist so far into your chest that I can drum my fingers on your spine.

Dont' give me any of that shiteating back-talk you like either, I am two bottles into a whiskey binge and I am not in the mood to deal with you.

Well, hooray I guess, here's an update from the man himself.

By Me You Stupid Dope FiendsAlright you greasy grabass gasbags, get your elbows out of your fat faces and pay attention because ol' Cliff is here to help you become something that might eventually be mistaken for a human instead of a basement-dwelling troglodyte zit factory constantly on the run from government health officers armed with shotguns and canisters of cyclon-B. I haven't updated my site for a while because a few weeks ago I fell down my front steps at 4am and twisted my motherfucking ankle like a goddamned shiteating bitch, I tell you it was like getting shot 14 times in the neck by that .50 calibre HMG back in 'Nam all over again. Anyway I was in so much pain that I forgot to turn the light on when I went inside and I mistook my computer processor machine for a chair and sat on it and it collapsed into about three million fucking pieces on the floor. Goddamn shitty-ass jap crap, this is what happens when you don't fucking buy American you know. I had to get a new online computer thing from Chris Huberman's electronics store and believe you me that was no fucking joyride because Chris Huberman is a fat fuck with skin roughly the same color and texture as used flypaper. He wanted twelve hundred bucks but I talked him down to four hundred after I threatened to smash every piece of shit korean jap gadget in his store.

While I've been reading the on-line internet on my new personal computer I've noticed that everyone on the web-net-inter-sites is a fucking nerd that spends 18 hours a day transfixed like a oily blob of fuckpaste in the cathode beams from their computer TV screens. Yeah, I know this is old news especially to you butterslugs since about 70% of you fit that description anyway (the other 30% of you spend 24 hours a day doing it until your eyeballs melt in their sockets and drip off your forty-chinned faces). However I'm a reasonable man and I've always believed that it's never too late to change, even for an obese pus-drooling festerfuck like you. What you need to do is to get your pimply asses out of your mother's basement and get yourselves the fuck off the goddamn inter-net for a while. Since most of you are too stupid to get a job outside the dogmeat industry and too fucking obnoxious to be allowed on the streets, my idea is that you should all take a very long vacation to some godforsaken shithole country where I won't ever have to see you again and hopefully you'll be gnawed to death by a pack of giant scorpions owned by a Serbian war criminal.

I don't take vacations anymore because travelling is too goddamn fucking expensive what with the insult of a pension I get after risking my life for this country in two (count 'em, TWO) wars. I'm a goddamn war hero and anyone who tells you otherwise is a lying sack of shit. Anyway back in about '76 or '77 was the last time I went on vacation, and that was only because my fucking rat-faced harpy of a wife wouldn't shut her fat mouth about it, god rot her vicious soul. I swear that woman must have trained to be a backup air-raid siren in the war. I can't remember where we were headed for that vacation now, I think it was Hawaii or maybe Cambodia, anyway it doesn't fucking matter because the stupid bitch had overloaded my car with all this fucking junk she wanted to take with her like 5 or 6 sets of clean clothes, I mean we were only going for a fucking month for god's sake, so the car broke down about halfway to the airport and we had to sit there for most of the night until a tow truck came to haul us back to the garage. Then when we got home I drank about 18 beers and accidentally set fire to the witch-crone's hair while I was lighting a cigarette. That was some fucking funny shit, she was running around the kitchen screaming with smoke pouring off the fucking rat's nest on her head before she shoved her head in the sink and splashed water all over herself and I was sitting there the whole time laughing my ass off. And the fucking cat jumped out of the window and made a dent in the roof of my car. Anyway I kicked her scrawny ass out and got a divorce about six months after that, last I heard the old hag was arrested for stealing some canned meat from the general store on Harper Street.

Anyway when I was in the Navy I travelled all over the place and killed a whole shitload of japs and commies and I would have got a medal only Petty Officer Hargreaves was an asshole who held a grudge against me because one time on shore leave I put a dead roach in his beer. I'm going to run down the list of foreign destinations so hopefully you can ship your worthless asses off to one of them and never be heard of again. 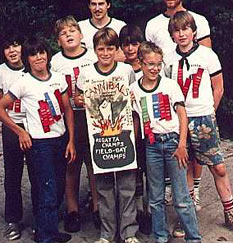 I must have run over fifty of these munchkin bastards on my riding mower without breaking a sweat. The little cannibal turd goblins did manage to clog my grass bagger though.CARIBBEAN: The Caribbean is right next to the US but on the other hand it is full of cannibals. Your doughy flabmountain of a carcass would feed a family of cannibals for approximately 8 years, so you would be at least partially redeeming your obnoxious waste of a life in the process.

MEXICO: Mexico is somewhere south of the US, near Antartica. It's basically the same as Texas only even worse of a shithole, if you can believe that. Also it's full of Mexicans, they eat donkeys and shit in your broom cupboard if you let them. If you go to Mexico you will get shot by bandits and rendered down into cattle feed so it's a win-win situation.

BRAZIL AND NAZILAND: This is somewhere near Africa or maybe in the Yellow Sea. Brazil is where the Nazis launched their rocket bombs to attack the US in the war with the help of the Aztecs. If you travel here you can also visit Argentina which is where ninjas come from. It's hot there and the jungles have spiders that are like 80 feet high, the guy Len Hardy used to work for when he was an accountant audited a Brazil oil company once and he saw one of their spiders eat a tank.

ENGLAND AND EUROPE: In Europe it is against the law to wash more than twice a century. Everything in Europe is really old because they ran out of money about 500 years ago. If you go to Europe you will be stoned to death or bitten by a vampire. It's also really close to the Soviet Commies so you have to watch out for stormtroopers blowing shit up all the time. The national dish of Europe is recycled cardboard. Scotland is an island in England and so is Australia. Scotland is where the vikings came from and I don't know shit about Australia except they have really big fucking alligators. They were on some wildlife show last week and they showed two alligators fucking, I mean what the fuck is up with that.

ASIA: The US used to own Asia until Pol Pot and his jap buddies started fucking with shit in Vietnam. Then we dropped a whole fuckload of napalm on his commie ass and since then none of those bastards have tried to mess with the US of A. I was in Korea and I saved a village from an infiltration squad of Vietcong disguised as medical orderlies by throwing a grenade into their truck.

CANADA: Canada exports moose fur and cold air. There are so many trees in Canada that you can walk from one border to the other across the branches. Hopefully though you'd fall off and break your malformed skull. Canada is also home to the moose which hunts woodcutters and has bulletproof skin. Only a giant polar bear can beat a moose. There are only about 14 people in Canada and they all live in igloos anyway.

So there you go, shitmallets. Take your pick and get packing, because if you don't stop sending me emails whining about how I haven't updated my website I'm going to personally come around to your houses and beat you unconscious with the sack of rusty doorknobs and broken bathroom tiles I have holding the garage door open. Then I'll smash all the plates in your house and pour industrial sealant down your sink. Now fuck off and download some AOL or whatever you nerdy freakshows do, I've got more important things to do than write shit on the inter-net all night for retarded slobbershits like you.