Dogs Have Important Things to Say 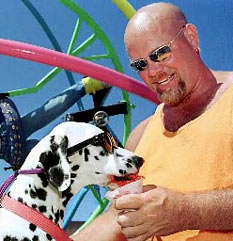 The changing dynamic of canine/human communication will lead to relationships previously considered taboo. The dog pictured above just got done licking its own asshole, which is pretty gross.Dogs are widely known as "man's best friend", but how can we really be sure when we don't know what they are feeling and saying with their incessant barking? A crazy electronics company in Japan, and trust me there are a lot of them, has designed a system that records your dog's barks, determines what the dog's mood is, then displays a cute little icon on a hand held display. You can read the entire article here.

Released by Takara Co Ltd, Japan's third-largest toy maker, the invention uses a microphone on the dog's collar to record the bark. An infra-red voice print is then beamed to the owners 'emotion pager' -- a small liquid crystal display that shows how the dog feels. Gauging six emotions, the "Bow-lingual" uses 200 words to relay to the owner the dog's feeling together with the relevant pictures.

Since I am positive the device couldn't just be randomly picking a word and icon to display your dog's emotion, I think this represents an incredible leap in human-dog interaction. Yes, even more important than those underground Russian dog sex videos I downloaded from Kazaa. This is the first step in a natural progression of technology designed to integrate our canine friends into society. Right now the "Bow-lingual" can only handle a handful of emotions and phrases to describe what a dog is feeling, but soon I'm sure they'll include a multitude of new emotions. You'll be able to know when you dog is feeling wistful, winsome, rococo, maladroit or even like a "number one superstar dog of world".

Before we even realize it's happening dogs will be getting jobs and wearing bark-to-speech translators to ease communication. That may sound somewhat hokey to you, but if I know Japs from anything besides WWII propaganda, it's from science fiction film adaptations of William Gibson stories. The Japanese all run corporations bent on using technology for global dominance and they are very honorable also. All they have to do is place their mighty Imperial attention on solving the dog problem and today's drooling Labrador will become tomorrow's drooling Labrador evil Japanese CEO.

Computers will have to undergo a change as well, with peripherals and input devices designed specifically for dogs. Using my bottomless knowledge of canine psychology I was able to create a realistic computer simulation of several dogs using computers. Naturally they were in an AOL chat room, because that's where all the action is on the interweb. 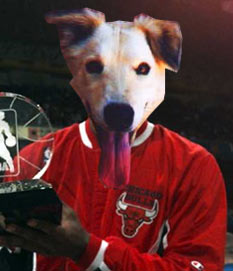 Pebbles receives a trophy for his accomplishments with the Chicago Bulls.Dogs will infiltrate every part of our society, from the boardroom to the bedroom. They already have a dewclaw hold on the sporting world, but as their ability to communicate ideas parallels or even surpasses that of human athletes you will see them taking part in every sport imaginable. Even more importantly than their involvement in everything from Hockey to NASCAR racing is the extremely valuable product endorsement and collectibles contracts they'll get. I've already got a preorder on the Upper Deck gold foil collectors set of Basketball superstar and Cairn Terrier "Ash", not to mention my interest in the pay per view match of Lennox Lewis versus. Bowser, a former racing Greyhound.

With the help of the dastardly Japanese, in a few short years the dogs will achieve not only equality but dominance in our society. Expect to see a dog senator or congressman no later than 2006 and a major party dog presidential candidate by 2012. Bending over and smelling someone's ass will replace the handshake, eating cat shit will be an acceptable snack, and randomly humping people and objects will no longer be considered sexual harassment. Hell, in five years at least two major TV networks will have programming broadcast with audio outside the range of human hearing.

It seems that big fan of religion and all around good guy Bob James has supplied us with another soul-saving comic. If you don't read this, you're risking ETERNAL DAMNATION!

Holy smokes, it seems like that poor little girl is in a bit of a pickle! Better read it and find out how the situation is resolved, otherwise you might find yourself in the same predicament. READ IT NOW!